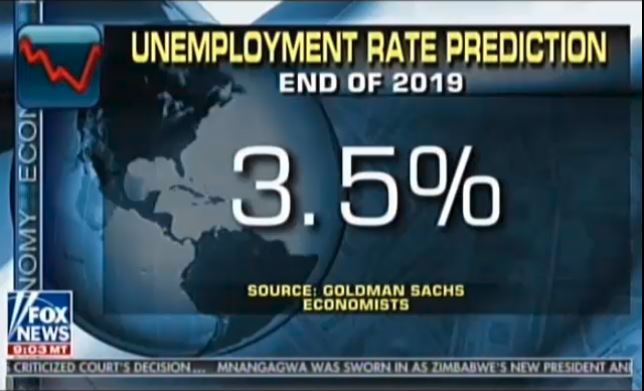 The national unemployment rate is already at a low 4.1 percent rate, but some economists think it could go even lower in the next two years. However, many liberal news outlets ignored the forecast.

Goldman Sachs economists issued a forecast in November that the U.S. unemployment rate could fall to as little as 3.5 percent by late 2019. The three broadcast networks and several major newspapers ignored their views.

Those economists “lowered their unemployment rate forecast to 3.7 percent by end-2018 and to 3.5 percent by end-2019,” on Nov. 17, according to Reuters. “Our projections would imply an evolution over the current cycle from the weakest labor market in postwar U.S. history to one of the tightest,” Goldman Sachs’ economists said.

Between Nov. 17 and Dec. 1, none of ABC, CBS or NBC morning or evening news shows reported the unemployment forecast from the well known financial firm. In print, The New York Times, The Washington Post, the Los Angeles Times and USA Today also chose not to cover the bullish prediction.

A conservative columnist did cite the numbers in an online CBS News commentary published Nov. 22, about “Why Republicans should be thankful (mostly) this Thanksgiving.”

Although the liberal broadcast news networks and national newspapers ignored the forecast, online news entities including CNN and Bloomberg did.

Bloomberg Markets summarized the predictions on Nov. 18, saying, “The U.S. economy is heading into 2018 with strong momentum that’s likely to boost wages and inflation more broadly.”

Fox News, CNN, The Wall Street Journal and Breitbart mentioned it along with op-eds in local outlets including the Philadelphia Inquirer and the Boston Herald (written by the same columnist as the CBS News commentary).

The broadcast networks have repeatedly ignored or downplayed positive economic news during President Donald Trump’s tenure. As of Oct. 31, ABC, CBS and NBC had only spent 52 seconds on estimates of 2017 GDP growth.