After having a meltdown election night on CNN, political commentator and former Obama staffer Van Jones tried to walk back the extreme tone of his previous comments on Thursday’s The View.  Prompted by co-host Whoopi Goldberg, Jones explained that by blaming the election of Trump on a “white-lash” he wasn’t actually calling all Trump voters white racists. “It would be unfair to the Trump voters to say that they're all racist,” Jones stated. “I wasn’t saying that,” he added, seemingly backing away from what everyone understands ‘white-lash’ to mean. 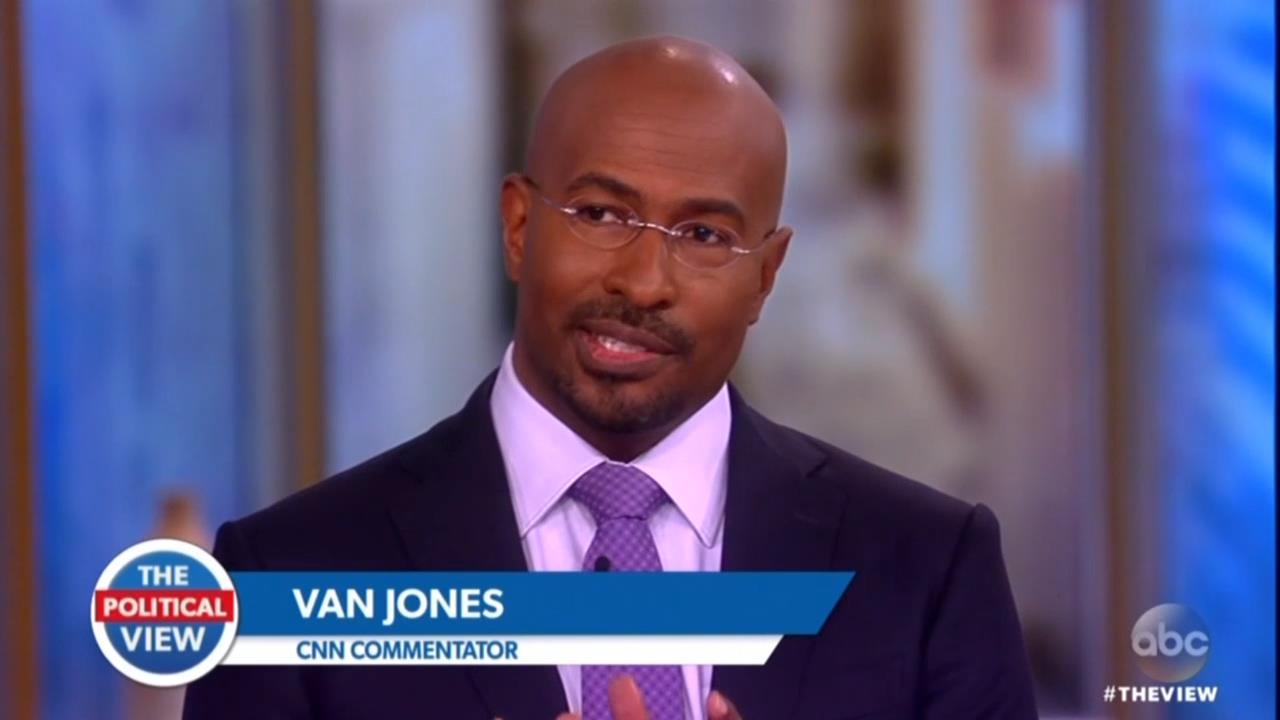 WHOOPI GOLDBERG: That was CNN commentator Van Jones. He wasn't playing, you know. He had a visceral reaction to Donald Trump's victory on election night, and now he joins us in "Hot topics." Please welcome the fabulous Van Jones! [ Cheers and applause ] Van, I would love you to explain to people exactly what you meant because people don't -- you know, if you're not a person of color, you don't know what you're talking about, so please explain a little bit for us.

VAN JONES: Let me tell you what I wasn't saying. I was not saying that all 50 to 60 million people who voted for Donald Trump are racially hateful people who want to be in the alt-right neo Nazi camp. I wasn't saying that. And it would actually be unfair to the Trump voters to say that they're all racist. But to say that the alt-right and the neo Nazis who were celebrating weren't a part, that would be unfair to the rest of America. We've got to be honest about what's going on. Both political parties right now I think have big problems and they don't want to discuss it. If you discuss it you get in trouble.

You just talked about how liberals and Democrats, we see ourselves as champions of the poor and the downtrodden. That's how we see ourselves. But we have somehow let a little camp of elitist sounding snobby people come into the party and it's obnoxious and they talk down to people and everybody hates it. And if you say that as a Democrat, they say what are you talking about. But everybody knows we have a problem with elitism. And then with the Republicans, they see themselves as the party of color blind individualism and that's beautiful, but they have somehow created a space for a small number of racially hateful people to come in their party, and they've got to deal with that too. [ Applause ] Both parties. We got to talk about it. For me, the truth is messy. It's never Hillary's perfect and Obama’s perfect and Trump is the anti-Christ or Trump was only for the working people and never stirred the pot on racism. The truth is messy. Ain't nobody perfect and we got to start talking about it.

VAN JONES: Look, first of all, what you're saying has a lot of validity, and there are a number of factors. Anybody who says it's only this or only that isn't being fair. But I think we have to start being true. The majority of white people voted against Obama both times. The majority of white people in California voted against Obama both times. So you don't have a country -- now do they do it for racial reasons? No. The majority of white folks have been voting against Democrats for a long time. It's not only racial. But we keep patting ourselves on the back and saying we elected a black president. No, we [pointing to himself] elected a black president. [ Applause ]

Later on, Jones compared the left’s “elitism” and “arrogance” with the racism on the right as faults on each side that helped Trump win the election.

But for Jones to pretend to be a moderate on this election would be disingenuous as he has a long record of making hyperbolic and radical statements. Here are a few examples from just this past election season alone:

During the Republican National Convention Jones had many meltdowns, claiming it was a “hate-fest” that “terrified” him and reminded him of “moments in history” where there’s “some big authoritarian movement of some leader that’s rising up.” Jones added that Donald Trump’s speech was a “disgrace” and a “schizophrenic psychopathic attempt” to reach blacks and Hispanics.

But during the Democratic National Convention, Jones cried during Michelle Obama’s speech and gushed over how good a person Hillary Clinton was, calling her a “workaholic, do-gooder chick” whom he had only lately come to appreciate.

A month before the election on Bill Maher’s show, Jones, like the rest of the left who was absolutely certain Hillary Clinton would win the election, warned Republicans to not “obstruct” Clinton when she’s elected, otherwise they would be committing “tyranny.”

But now Jones tries to toe the line of his earlier, more extreme comments saying he didn’t “really mean” that every Trump voter was a racist. Well if it was only a “small number of racially hateful people” that voted for Trump, as you said Van, then how could a “white-lash” have elected him?