Off the Rails: Van Jones Declares GOP Convention a ‘Hate-Fest’ 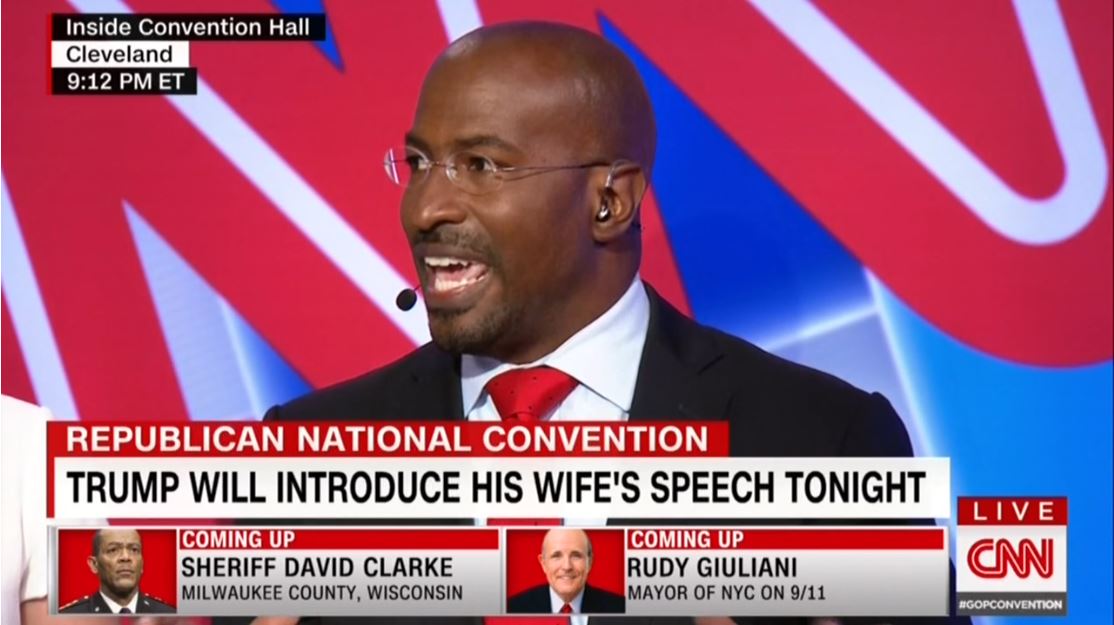 During CNN’s coverage of the Republican National Convention on America’s Choice 2016 on Monday, panelist Van Jones went off the rails and declared the whole event an unabashed “hate-fest.” “What I will say is this. Up until now, up until this moment, I was not saying borderline hate-fest. This is hate-fest,” Jones declared after his fellow panelists called him out for going beyond the pale with his description of the convention and what was being said on stage.

Jones started off slow by stating, “I feel that what's happening right now is the opposite of positive.” He was absolutely shocked that the GOP would talk about people who were killed by illegal immigrants. “I think taking that approach is very very dangerous,” he warned, saying they were painting folks with a broad brush. And as would be expected Jones used the classic racist tag on the speakers, “That is the definition of bigotry.”

But Jones’ fellow panelists didn’t let him get away with it. Author S.E. Cupp countered Jones’ representation of the convention by reminding folks of the Democrats’ exploitation of Cindy Sheehan, who protested President George W. Bush after her son was killed in Iraq:

And I think, everyone remembers Cindy Sheehan, and how she was used by Democrats, at conventions to get people elected, and MoveOn.org, Code Pink. I mean, this is what happens when serious issues are being discussed and debated. And when people are trying to convince voters to move in a certain direction. This has not been a hate-fest. Even by Donald Trump’s standards.

Jones may not have a problem with the Democrats’ use of Sheehan but he was “very uncomfortable” with the speech given by Patricia Smith, whose son was killed in the Benghazi attack, earlier in the night. “I worry about exploiting grief,” he said, while claiming he prays, “she can find some peace and that we don't politicize her pain.”

VAN JONES: I feel that what's happening right now is the opposite of positive. What you're hearing in the background, they’re talking about people who’ve lost their lives because someone came into the country without papers and killed them. And this is becoming the center point of their argument about undocumented people in this country. And I think taking that approach is very very dangerous because what it does is it takes a whole group of people who statistics show commit fewer crimes, based on there numbers, and associates them with their very worst element. That is the definition of bigotry. You do not want to do that. And I'm shocked to see this happening behind us right now.

And I think for people across the country, if you are a Latino, if you are an immigrant, if you are somehow able to hear what's going on right now, I think you would be very, very disturbed by this. It's turning into what I can only call some kind of borderline hate-fest against undocumented immigrants based on killings of a small -- by a small number much people. And that is wrong. 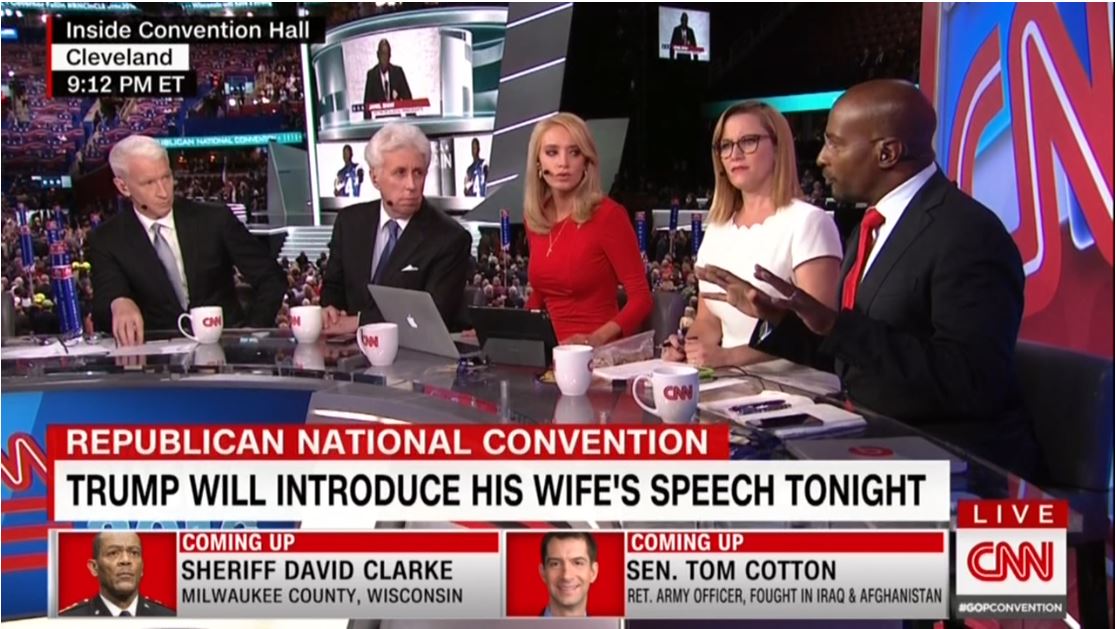 KAYLEIGH MCENANY: Van, what has happened over the last eight years is we’ve heard the terms Benghazi, we’ve heard the term and furious, the gun-running scheme that went horribly wrong and ended up killed a U.S. Border agent. We heard these scandals marginalized by Democrats time and time again. And what is happening behind us right now, in this first hour, is the Republicans are putting a human face on these scandals. We are hearing from the mother who lost her son in Benghazi. We are hearing from Brian Terry's parents who lost their son at the hands of horrible gun-running scheme that went awry in the Obama administration.

DAVID AXELROD: And as Jeffrey said, what can be more uplifting and positive than that?

MCENANY: But alongside that you are also hearing a very positive vision of what it means to be an American and love your country, and sacrifice, and fight for your country.

S.E. CUPP: And I think to call this is a hate-fest, Van, is overstating.

CUPP: And I think, everyone remembers Cindy Sheehan, and how she was used by Democrats, at conventions to get people elected, and MoveOn.org, Code Pink. I mean, this is what happens when serious issues are being discussed and debated. And when people are trying to convince voters to move in a certain direction. This has not been a hate-fest. Even by Donald Trump’s standards.

LORD: We get back to the basic point of this, no one has the right to come into this country or any other country illegally. If you do so in Mexico, they’ll put you in jail.

JONES: That is a very good argument. And it's an argument that does not require demonizing a whole community based on negative actions of a few. What I will say is this. Up until now, up until this moment, I was not saying borderline hate-fest. This is hate-fest.

VAN JONES: I felt very uncomfortable with the mother. I felt that she was unhealed and I felt that -- I remember when the mothers from -- Mother Emmanuel, when those people were killed in South Carolina and the country applauded them for forgiving so quickly. I worry about exploiting grief. And I feel that, for me, I felt uncomfortable with her unhealed grief being brought forward in that way and pray she can find some peace and that we don't politicize her pain.

KAYLEIGH MCENANY: But it’s worth mentioning what happened [inaudible] According to Pat Smith, she was told on the runway by Hillary Clinton that the reason that her son was killed was because of a video when, in fact, she said different things in private e-mails. She has a real grievance if that is the case, as she says it out, and there is a reason she is upset.

ANDERSON COOPER: And as Jake mentioned Hillary Clinton in a debate said that was not the case. But again that's clearly only those two know exactly what was said.