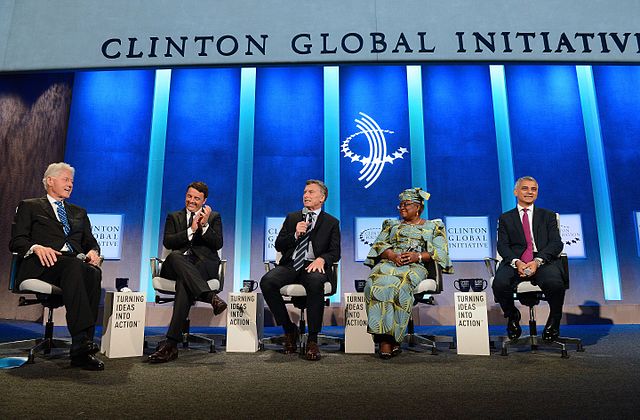 Two months after Hillary Clinton lost the presidential election, the Clinton Global Initiative -- the “networking” arm of the Clinton Foundation -- is shutting down.

A Worker Adjustment and Retraining Notification filed with the New York State Department of Labor on January 12 reports that the Clinton Foundation will lay off 22 employees on April 15, 2017, due to the “discontinuation of the Clinton Global Initiative.”

The formal layoff announcement seems to be the last step in closing the Clinton Global Initiative (CGI), which former president Bill Clinton first hinted at in August 2016.

As a “networking” organization for the Clinton Foundation, CGI’s annual events allowed high profile CEOs, donors, politicians and journalists from major media to hobnob together. “Rather than directly implementing projects, CGI facilitates action by helping members connect, collaborate, and make effective and measurable Commitments to Action,” the website said.

“There is a really creepy vibe, to me, personally, at the Clinton Global Initiative,” The New Yorker contributing writer Adam Davidson revealed in an August 2016 Slate podcast. Although Davidson was a Clinton supporter, he had plenty of criticism for CGI.

“It seems to me that it is all about buying access. It is incredibly expensive just to go to the thing,” Davidson explained, “and there are sort-of these explicit ways in which you get access. You pay more money to get more access to political leaders and to really rich people and big corporate leaders.”

Some of those gaining access through CGI were journalists.

ABC Chief Anchor George Stephanopoulos was a “featured attendee” for at least one CGI meeting (in 2007). He then promoted CGI in interviews with Bill Clinton in 2007 and 2014. Between 2012 and 2014, Stephanopoulos gave $75,000 to the Clinton Foundation, which he did not publicly disclose, according to Politico.

PBS NewsHour anchor Judy Woodruff was another Clinton Foundation donor who was a “featured attendee” at the 2007 and 2013 annual CGI events.

In fact, ABC, NBC, CBS, and CNN all fawned over CGI. Yet when WikiLeaks revealed that Bill and Chelsea Clinton attended an event in return for $12 million to CGI from the King of Morocco, CBS and NBC spent less than 3 minutes to the story combined. ABC ignored it altogether.