Batman might be fighting Superman at your local cinema, but the movie’s writers and actors are politically united behind the left. Together, they gave $58,000 to liberal PACs and Democrats since 2002, but not a cent to Republicans. Actor Ben Affleck was the biggest liberal donor involved with the film.

Despite poor reviews, like a dismal 28 percent on Rotten Tomatoes, Batman v Superman: Dawn of Justice managed a super-human debut with the best March opening ever, the top opening weekend for a DC Comics film and the sixth largest U.S. opening ($170 million), according to Variety.

While fans have been throwing their support behind Batman, played by Ben Affleck, or Superman, played by Henry Cavill, Batman has been busy funding Democrats. 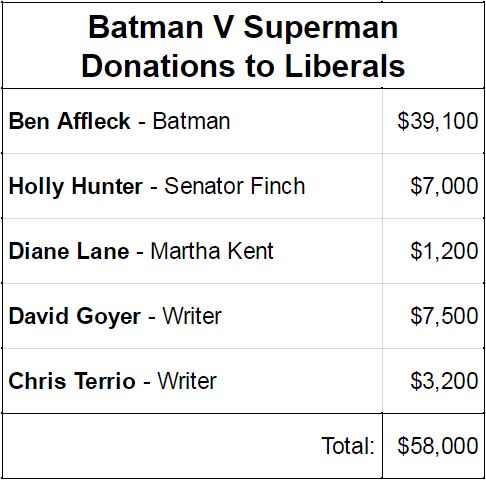 Since 2002, Ben Affleck gave $39,100 to Democrat politicians including President Barack Obama and progressive darling, Sen. Elizabeth Warren, D-Mass. According to The Hollywood Reporter, Ben Affleck was also one of many celebrities giving to Democrat Hillary Clinton during 2015 Hollywood fundraisers.

Affleck’s liberalism runs deep. In 2013, he said he “probably wouldn’t like” someone if he found out they were a conservative. Affleck also yelled at fellow liberal Bill Maher on live television for daring to criticize radical Islam in 2014. CBS This Morning and The View’s Rosie O’Donnell sided with him.

Actress Holly Hunter, who plays Senator Finch in the DC Comics flick, is also a liberal donor. She gave $5,000 to the California Abortion Rights Action League in the early 1990s, where she served on the Board of Directors. In 2004, she also donated $2,000 to the Democratic National Committee.