Bozell & Graham Column on the Worst of 2014: 'Victory for the Haters'

Historians will record that 2014 was a terrible year for liberal Democrats, not just at the polls but also in the news. The networks spent most of the fall campaign pretending there wasn’t a fall campaign, and for good reason. Obama’s Hope and Change aura had completely sunk into the muck as Obama’s honesty and competence both took a hit in the hard news of ISIS and Ebola.

But if Team Obama was going down, the journalistic elite were going down with him. They are cemented with their so-called savior, as can be seen in the Media Research Center’s “Worst of the Worst 2014,” marking the worst quotes gathered from media coverage this year. A panel of 40 opinion leaders selected the most ridiculous verbiage.

NBC News veteran Andrea Mitchell won the “Blue State Brigade Award” for fall campaign coverage for whining on election night that conservative victories were based on “a scare tactic by the Republican opponents of Democratic incumbents, who tried to focus on ISIS and Ebola in the scariest, most non-factual ways, to take the eye off the real issues.”

Earth to Andrea: ISIS and Ebola are not real issues? How exactly did conservatives manage to politicize them? If anyone is guilty of scaring the public about the devastating potential of Ebola in America, isn’t it the media themselves? 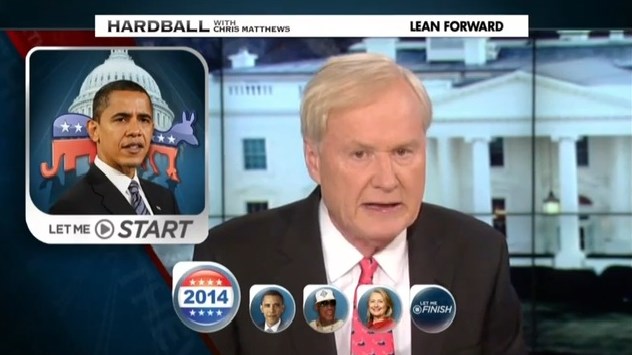 It’s not hard for MSNBC’s Chris Matthews to make this list. . He uncorks so many boneheaded comments he merits his own “Mean-Spirited, Nasty Belligerent Chris Award.” Back on January 7, Matthews was already panicked at the thought of a conservative wave in November. “You’ll see the beginning of the end to what could have been — what many of us believe should have been — an historic turn toward full democratic government in this country,” he complained. “The goal will be to erase not just Obama from the history books, but any evidence that someone of his background should ever think of being President. It will mean victory for the haters.”

No hyperbolic character assassination there.

Matthews also won the “Ku Klux Con Job Award” for phony racism charges this year when he began his October 21 show by accusing the Republicans of “killing the black vote.” When you ask someone for an ID, you’ve apparently committed the cold-blooded murder of voting rights.

ABC’s Barbara Walters retired in May, but her on-air adoration of two feminist heroes could not be ignored. She earned the “Media Hero Award” for praising Anita Hill, whose politically timed sex-harassment charges against Clarence Thomas have never been proven, no matter how much the Thomas-haters spin otherwise.“I would just like to say that I’m honored to be meeting you,” she professed while interviewing Hill on “The View” on March 19. “I watched those hearings, as did so many other people. And to so many of us, you were our heroine.”

On May 16, for her last day on “The View,” Walters brought on special guest Hillary Clinton and won the “Pantsuit Patrol Award” for Hillary-boosting. “You are someone we admire — and, for me, it’s more than admiration — it’s very deep affection, and I thank you for coming on....No matter what she does, she will always, to me, be the most fascinating.” Pure goo.

That sounded a lot like actress Gwyneth Paltrow, who won the “Barbra Streisand Political IQ Award for Celebrity Vapidity.” Paltrow hosted a fundraiser on October 9 with the president and declared “It would be wonderful if we were able to give this man all of the power that he needs to pass the things that he needs to pass...You’re so handsome that I can’t speak properly.”

It’s probably too much to expect that 2015 will be the year that the media achieve political sobriety and speak properly in Obama’s presence.