Republicans really hold racist double standards when it involves teenage pregnancies and marriages. This according to Joy Behar, who shared such a sentiment on the September 3 edition of "The View." Discussing the pregnancy of Sarah Palin’s daughter, Bristol, Behar expressed sympathy for the father and fiancé, Levi Johnston.

Behar exclaimed it’s "the end of his life" because "he’s married at 17" (Johnston is actually 18, which is the legal difference between a child and an adult) When Elisabeth Hasselbeck asked "why isn’t that the beginning of another [life]?" Joy Behar, implying Republicans are racist, rebutted "if this was a black teenage couple, you wouldn’t be saying it so easily. Not you, but the Republican party would be all over that." Behar subsequently added "they’re white, they’re Christian. Everybody loves them on the right wing."

Joy Behar: Speaking on Faith is 'Impinging on the Constitution'

A presidential candidate who shares his or her religious beliefs is "impinging on the Constitution" according to "View" co-host Joy Behar. On the show’s season premiere September 2 the panel caught up on the many hot button political stories from Sarah Palin’s pregnant daughter to sharing religion in a public forum.

When Barbara Walters brought up the discussion of Senators Obama and McCain attending a forum with Reverend Rick Warren, Behar declared "both of them needed to say that Jesus Christ was their savior. That is very much impinging on the Constitution in my opinion. Why do we need to know who’s their savior?" Elisabeth Hasselbeck and Sherri Shepherd disagreed wondering what is wrong with them making such a statement. 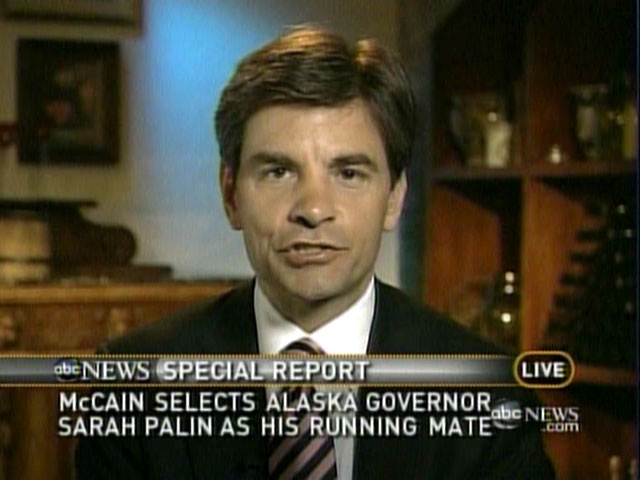 Confirming that John McCain picked Sarah Palin, the governor of Alaska, as his running mate, Charlie Gibson and George Stephanopoulos were quick to jump on the corruption within Alaska’s Republican party, but did not tell the whole story. 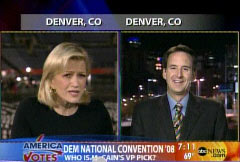 If a media personality is to attack a political figure for lack of experience one would expect this person to get the facts correct. 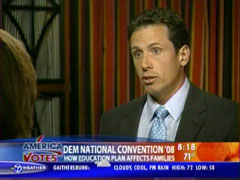 GMA's 'I Love Yous' to Hillary the Broncos Fan 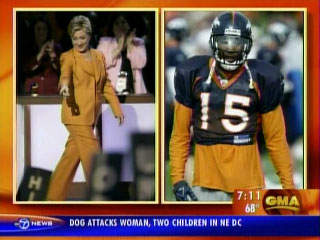 With Senator Hillary Clinton’s speech at the Democratic Convention, the co-hosts of "Good Morning America" could not get over their awe for the Clintons. On the August 27 edition, at the end of George Stephanopoulos’ analysis, the co-hosts debated exactly how Former President Bill Clinton expressed his love for his wife, with Chris Cuomo believing the former president stated "I love forever and ever."

Is ABC’s love for the Kennedys so blind that they would overlook an unintentional allusion to Senator Ted Kennedy’s most notorious night? On a very soft interview with Senator Kennedy’s son, Congressman Patrick Kennedy, Good Morning America anchor Chris Cuomo gushed over the senator’s speech reminding the audience that Patrick Kennedy heard someone label it a "Michael Phelps moment" referencing the Olympic swimmer. Ted Kennedy did have his Michael Phelps moment, but not in Denver 2008, but Chappaquiddick 1969.

Diane Sawyer’s tease and at the end of Chris Cuomo’s interview with Congressman Kennedy both referenced Senator Kennedy’s comparison to Michael Phelps. Diane Sawyer quoted the congressman "Michael Phelps moment" and Patrick Kennedy brought the subject up in his chat with Cuomo. At the end of the interview Cuomo compared Phelps’ Olympic record to Kennedy’s speech editorializing "to a lot of Democrats it meant even more than eight gold medals." [audio excerpt available here] 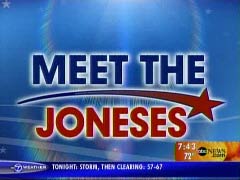 To find "experts" on a particular issue, ABC’s Chris Cuomo, first profiled a left leaning organization, but only cited them as "non-partisan." Beginning a series of in depth segments examining Obama’s stance on the issues, Cuomo offered what appeared to be a fair assessment of Barack Obama’s plan.

ABC's Cuomo to Obama Adviser: 'Do We Know What Michelle is Wearing?' 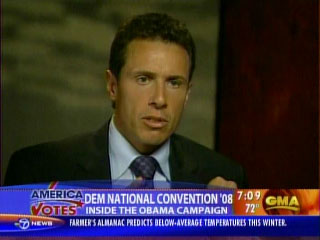 ABC’s Chris Cuomo kicked off Democratic Convention week with a very positive portrayal of Obama adviser Valerie Jarrett. On the August 25 edition of "Good Morning America," Cuomo asked such hard hitting questions as to Michelle Obama’s fashion choice the night of her speech.

Barack Obama, who boasts about his alleged "post partisan" philosophy, can not seem to resist appeasing the left wing blogosphere by making cheap shots at Fox News. Obama, who enjoys overwhelmingly positive coverage from the mainstream press, blasted Fox News for daring to interview an author critical of him. 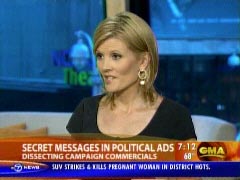 Veteran actor Ernest Borgnine, still acting at age 91, does not represent the mainstream ideology of the Hollywood elite, or even a potential first lady named Michelle. Borgnine, unlike most of his fellow Hollywood elitists, believes America is "an amazing country" and that one has to "prove" one is "a good American by being an American."

Appearing on the August 12 edition of "Good Morning America," Borgnine promoted his new autobiography. When given the opportunity, Borgnine, the son of Italian immigrants, offered praise to America.

"It hit me when I was given the Medal of Honor over at the Ellis Island thing, you know, because my parents came over from Italy although I was born here in New Haven, Connecticut. But, you know, I took it upon myself to speak that day about the people that were around me, generals, admirals, police chiefs, everything that you could possibly imagine, all from different parts of the world who have come to this country to make this great country.

Is one who conspires to conceal a husband’s affair really "an icon of strength"? ABC’s Deborah Roberts seems to think so. In a story about women who fell victim to a cheating husband, Roberts segued into the segment with the news of John Edwards’ admission.

Katie Couric Quotes 'Sex and the City' to Face 'Sexism'

Couric uses "Sex and the City" as a way to handle the alleged sexism she frequently faces, at least her 12-year old daughter’s take on "Sex and the City." Appearing on the July 30 edition of "The View" to promote awareness for cancer research, Couric first took questions about her career and recent allegations of sexism in the media and politics. When Joy Behar asked how she deals with such negative press, Couric, who likes to quote her daughter’s wisdom, did so again. [MP3 audio clip available here]

"But Carrie once said when I was kind of bummed out about something that somebody had written that was really nasty and had nothing to do with sort of, my abilities or my journalistic capabilities. She said ‘mom, remember what Samantha said in "Sex and the City"? "If I listen to what every bitch in New York City said about me, I’d never leave the house."’ [laughter and applause] And I said ‘Carrie, you’re not watching "Sex and the City" are you?’ She sometimes watches with Ellie and Ellie covers her eyes and closes her ears in the inappropriate parts."

From the start, Barbara Walters asked Couric about her recent cries against sexism in the Democratic primary. Couric first explained that her comments to an Israeli newspaper were lost in translation. In words very similar to Gloria Steinem’s, Couric opined that "in our culture, sexism is more socially acceptable [than racism]."

CNN Analyst: Tax Cuts a Product of the 'Silly Season'

Calling for tax cuts to stimulate the economy is just a call from the presidential election’s "silly season" and those who do (McCain) are "going to say anything to get elected" according to CNN financial analyst Gerri Willis. Appearing on July 21 edition of "The View,"Willis discussed many of the current economic troubles from high oil prices to the mortgage crisis. [audio available here]

Reliable liberal and Democratic partisan Joy Behar asked "how can the Republican party then say that they’re going to cut taxes in this election? How can they say that when the whole country will fall apart?" Gerri Willis changed her financial analyst cap to political analyst adding "it’s the silly season."

Earlier in the broadcast, Joy Behar brought up some past McCain jokes she finds offensive, such as the "bomb, bomb, Iran," remark. Behar felt such jokes are "inappropriate" but seemed to forget her own inappropriate jokes such as belittling the role of the saints to simply crazies and labeling men "idiots" who "think with Mr. Happy." Elisabeth Hasselbeck , for her part, added McCain does not have a monopoly on such jokes and alluded to Obama’s recent joke mocking the American people.

Do not say black and white Americans live in the same world or you will feel the wrath of Whoopi Goldberg. That is what Elisabeth Hasselbeck discovered on the July 17 edition of "The View." Upon suggesting that, Whoopi reduced Elisabeth to tears.

On the news of Jesse Jackson’s use of the "n" word, the conversation quickly developed into the double standard involved between a white and black person’s use of the word. Sherri Shepherd and Whoopi Goldberg admitted there is a double standard, but added there should be. Sherri Shepherd said she uses the word "as a term of endearment," but said to Barbara Walters "I don’t want to hear it coming out of your mouth."

Elisabeth Hasselbeck, puzzled by the obvious double standard, questioned how she can explain to her young daughter why she is not allowed to use that word, but other kids are, when she noted "we live in the same world," Whoopi went off on a tangent that blacks and whites do not live in the same world. Whoopi, who also dismissed Elisabeth Hasselbeck’s concerns as "very white," added Elisabeth just does not "understand."

GOLDBERG: We do live in different worlds. I’m sorry. I’m sorry it’s the way it is Elisabeth. This is the way it is. This is how I grew up. My mother could not go and vote in the United States of America, the place of her birth. We, go- wait, wait.

WALTERS: And don’t we want that to change?

GOLDBERG: Yes, we would like to. But you don’t understand.

The global warming alarmism in the mainstream media never ceases to stop as "The Houston Chronicle" went so far to warn of a spike in kidney stone cases. Yes, driving an SUV can now cause pain in the back as well as the pump.

The right of African-Americans to vote in the United States is not permanent according to "View" co-host Whoopi Goldberg. On the July 14 edition, Whoopi echoed the popular Internet rumor from a few years ago that voting rights for African-Americans was set to expire in 2007. [audio available here]

"Do you know that we are the only people in the United States who have to have their voting rights okayed every couple of years? Did you know that they have to vote on the Voting Rights Bill for black folks? Can we just, can one of you candidates- can we just take care of that so I don’t have to worry every year, my God am I not?"

The show’s sole "conservative" Elisabeth Hasselbeck agreed "it’s ridiculous" and "something needs to be done."

Before spouting such inflammatory charges on national television, Whoopi should check the facts beforehand. Responding to some rumors, the Department of Justice issued a press release clarifying the Voting Rights Act of 1965.