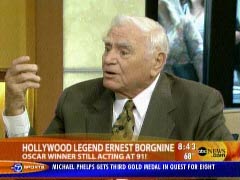 Veteran actor Ernest Borgnine, still acting at age 91, does not represent the mainstream ideology of the Hollywood elite, or even a potential first lady named Michelle. Borgnine, unlike most of his fellow Hollywood elitists, believes America is "an amazing country" and that one has to "prove" one is "a good American by being an American."

Appearing on the August 12 edition of "Good Morning America," Borgnine promoted his new autobiography. When given the opportunity, Borgnine, the son of Italian immigrants, offered praise to America.

"It hit me when I was given the Medal of Honor over at the Ellis Island thing, you know, because my parents came over from Italy although I was born here in New Haven, Connecticut. But, you know, I took it upon myself to speak that day about the people that were around me, generals, admirals, police chiefs, everything that you could possibly imagine, all from different parts of the world who have come to this country to make this great country.

And people forget that, you know, people forget that they came from people from the other side, you know. It’s an amazing country. People just don’t realize how wonderful this place is. And they just take it as a lock and ‘oh yes, I deserve this.’ You don’t deserve anything. You’ve got to prove that you’re a good American by being an American. That’s what I feel anyway."

The audience followed with loud applause.