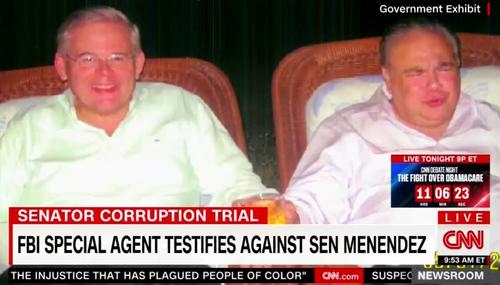 Mike Ciandella
September 27th, 2017 8:00 AM
CNN has barely covered the corruption trial of Democratic Senator Bob Menendez, but the network didn’t always have an aversion to the corruption trials of sitting U.S. senators. Back in 2008, Republican Senator Ted Stevens got plenty of attention from CNN for his own corruption trial. When it came to reporting on Stevens, CNN rarely missed a day, and often updated viewers on the status of…

Tom Blumer
February 20th, 2009 3:09 PM
Well, isn't THIS interesting. In a December post (at NewsBusters; at BizzyBlog), I reviewed ABC's online "The Faces of Political Scandal" slideshow, which featured mini-profiles of 14 politicians in recent years who have been tainted by scandal and/or crime. At the time, I noted that: Of the 14 politicians identified, seven are Democrats and seven are Republicans. Five of the seven GOP…

Tom Blumer
December 11th, 2008 9:04 AM
A collection of "The Faces of Political Scandal," assembled by ABC News yesterday (HT to an e-mailer), once again demonstrates the media's relative reluctance to identify the membership of Democrats involved in scandal.Of the 14 politicians identified, seven are Democrats and seven are Republicans. Five of the seven GOP members are identified as such, while only two of the seven…

Mark Finkelstein
November 23rd, 2008 10:03 AM
In an MSM eager for the advent of the Age of Obama, Kate Snow may have taken the cake.  The weekend GMA co-host almost sounded as if she were calling for some kind of coup d'etat, musing whether Obama should be urgently "forcing" change before he takes office. How over the top was Snow?  She had to be talked down from her fin de regime fantasy but none other than . . . Paul Krugman.ABC…

Matthew Balan
November 19th, 2008 1:14 PM
During Tuesday evening’s “No Bias, No Bull” program, Washington Post national political correspondent and CNN contributor Dana Milbank implied, perhaps inadvertently, that the incoming Obama adminstration was like the North Vietnamese advancing on Saigon in 1975. Host Campbell Brown asked Milbank about the “backlog of at least 2,000 pardon applications” to the Bush administration before the…

Brent Baker
September 25th, 2008 7:56 PM
On Thursday night, CBS anchor Katie Couric began a short news update on Senator Ted Stevens of Alaska by immediately highlighting his party affiliation: “The senior Republican in the U.S. Senate went on trial today for corruption...” Stevens was appointed to his seat in 1968. But the night before, in an item on ethical questions surrounding Congressman Charles Rangel of New York,…

Brent Baker
July 29th, 2008 8:44 PM
The ABC, CBS and NBC evening shows on Tuesday night properly identified indicted Senator Ted Stevens as a Republican -- though not very creatively as they all employed the identical language in describing Stevens as “the longest-serving Republican in the U.S. Senate” -- but they weren't so eager to name the party of Democrats in trouble in recent years. ABC anchor Charles Gibson teased World News…

Richard Newcomb
July 29th, 2008 2:43 PM
Does the media treat Democrats and Republicans differently when stories of their various peccadillos reach the Press? Well, in actuality, the question is essentially a moot point. There are stories today on the NewsBusters front page testifying to said bias. However, in Yahoo! News' choice of front-page stories today, we can see yet another example of this bias.