Sorry, NYTimes, It's the Private Sector, Not Obama, Which Has Successfully Wired America

The Gray Lady on Sunday packed a tremendous amount of bias into the opening sentence of their “Most of U.S. Is Wired, but Millions Aren’t Plugged In.”

Leftist ‘Consumer Interest’ Groups Are Only Interested in Big Government

We have oft discussed the Orwellian manner Leftists do, well, everything.

And specifically how they go about naming their gaggles – the groups they form to advance their Leftist agenda.

What could be better – and less innocuous – then that?

Last Thursday, on his unwatched and unwatchable MSNBC television program, Equine Ed Schultz stepped into his Leftist Wayback Machine for a little retro-censorship. With the intent of bringing it back to the future.

Having first called for a reimposition of the alleged "Fairness" Doctrine the week prior on his unlistened to and unlistenable radio show, Schultz took his censorious intentions to his tens of viewers on the tube. (He is doing all of this after making fun of us in 2008 for concerning ourselves with the Doctrine's return.)

Schultz made his latest call for "fairness" by citing the patently absurd 2007 "report" The Structural Imbalance of Political Talk Radio. Which was co-published by the George Soros-funded Leftist "think" tanks Center for American Progress and (the Marxist-founded) Free Press.

We have in fact dismantled this "report"for its deep-seated and inherent fraudulence. It asserts that talk radio is too conservative - and that we need oppressive government regulations aplenty to remedy the situation.

However, it cooked the books from the outset - excluding uber-liberal National Public Radio (NPR) from their analysis pool and then drawing their fraudulent conclusion.

It was co-authored by the Hugo Chavez-loving, "white people" need to be forced to "step down" "so someone else can have power" asserting Mark Lloyd - who is now the Federal Communications Commission (FCC)'s first ever "Chief Diversity Officer." Just one of the many honest brokers involved in this wholly dishonest endeavor.

Is this what Federal Communications Commission (FCC) Chief Diversity Officer Mark Lloyd meant when he said (on camera) Venezuelan thug dictator Hugo Chavez (take that, Sean Penn) had begun "to take very seriously the media in his country"- while praising Chavez's "incredible...democratic revolution?"

The Associated Press (AP) late Friday night reported "Chavez criticizes US as arrests stir concern."  Which plays down the lede in the headline, but gets right into it in the story itself.

Venezuelan President Hugo Chavez on Friday defended the arrest of a major TV channel owner, calling him a criminal and denying the government is carrying out an assault on press freedom.

The back-to-back arrests this week of two government opponents - including the owner of Venezuela's only remaining anti-Chavez TV channel - have drawn accusations that Chavez is growing increasingly intolerant and authoritarian as his popular support has slipped.

Opposition leaders and human rights groups condemned Thursday's arrest of Globovision's owner Guillermo Zuloaga, who was detained at an airport and released hours later after a judge issued an order barring him from leaving the country.

As the piece indicates, this is but the latest example of Chavez taking "very seriously the media in his country," in Lloyd parlance.  Which is woefully at odds with freedoms of speech and the press.  Which is fine with Lloyd, because so's he.

Forbes: Is a Chavez-Style Media Crackdown Coming to America? 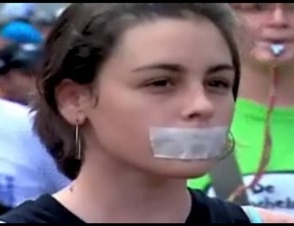 "Many of [Hugo] Chavez’s most ardent supporters here in the U.S. come out of the 'media reform' movement, which believes that our corporate media has been thoroughly co-opted by capitalists bent on destroying the benevolent leadership of the likes of Chavez. They think that our capitalist-plagued media world is in dire need of reform."

So ominously wrote Steve Forbes Wednesday in an article guaranteed to make right-thinking Americans from coast to coast wonder what's next in the Left's plans to control the press.

Readers are advised to fasten their seatbelts tightly for what Forbes presaged is guaranteed to scare the heck of you (h/t Glenn Reynolds):

It's no secret the traditional journalistic business model doesn't work in an era where advances in technology have increased flow and velocity of information. Those changes have rendered many forms of communication obsolete and made journalism a difficult way to make a living.

This has concerned some on the left who are convinced the ways of the past are vital to a democratic nation, including John Nichols, co-founder of Free Press and the co-author of "The Death and Life of American Journalism: The Media Revolution that Will Begin the World Again," with Robert McChesney. Both authors appeared at the National Press Club in Washington, D.C. on Feb. 16 to make the case for some sort of government policy to help this flailing trade and pointed to history as an example of how the media effected change. The amount of government funding they settled on was $30 billion annually.

"At some fundamental level the one thing we have to get back to is this notion that if we want an America that is fully democratic, really does confront the question of bankrupt government and a government that has other priorities, we're going to have to remember how we did in the past," Nichols said. "The greatest bankruptcy in this country was the founding on the original sin of human bondage. That was a horrible event and for the first 70 years of the American experiment, the Congress did not debate slavery."

Want government to fund public media? Then PBS has a place for you. If you back giving news organizations tens of billions of dollars, that's good for nearly 25 minutes of air-time.

That's how the PBS weekly newsmagazine "NOW" addressed a left-wing solution to the decline of the news industry. On Jan. 15, "NOW," welcomed the founders of the left-wing media think tank Free Press - John Nichols and Robert W. McChesney - to tell how tax dollars can be the key component of "Saving American Journalism."

The duo recommended the United States pay $30 billion a year to fund media, what Nichols called a "pretty sane number." "This is sort of the number a free society pays to have credible journalism," he argued. 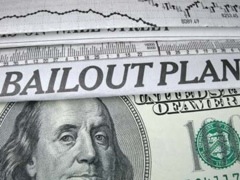 A powerful Democratic lawmaker has stated his willingness to intervene on the behalf of the federal government in the nation's news sector. Insisting that the newspaper business is vital to democracy, Rep. Henry Waxman, D-Calif., suggested that the government "resolve" the problems in the industry, potentially though misguided federal bailouts.

At a workshop on the future of journalism at the Federal Trade Commission, Waxman, who chairs the House Energy and Commerce Committee, suggested the federal government secure "public funding for quality journalism as a means to preserve a critical mass of resources and assets devoted to public media."

Though Waxman raised other options, he devoted more of his address to public funding for newspapers than any other avenue for preserving the medium. Newspaper bailouts could, he stated, "preserve and maintain key functions of modern journalism ... by cushioning the economic squeeze publishers are facing."

We wrote Monday of Leftist, George Soros-funded "media reform" outfit Free Press, and their extensive relationships with people currently in power at the Federal Communications Commission (FCC) and in the White House - up to and including President Barack Obama.

With current FCC Chief Diversity Officer ("Diversity Czar") Mark Lloyd and the Leftist, George Soros-funded Center for American Progress, Free Press co-authored the 2007 report The Structural Imbalance of Political Talk Radio.  Which calls for the FCC to enforce exceedingly broad (we would say warped) new definitions of the media diversity and localism FCC broadcast license requirements. These new definitions and their enactment are intended to force conservative and Christian talk show hosts off the air, to be replaced by those of a Leftist bent.

We also mentioned Free Press's co-founder, college professor and avowed Marxist Robert McChesney. (Some fairly interesting video quotes from him at right; inordinately interesting print quotes from him below the fold.)  If you have not yet already had enough Marxism and Marxists, please - read on (warning - there's a Reverend Jeremiah Wright on-video sighting beneath as well).

The broader public is finally being introduced to Leftist "media reform" outfit Free Press and its co-founder, avowed Marxist Robert McChesney. (I appeared on the October 7, 2009 edition of the Glenn Beck television show to discuss one and all.)

Founded in 2002, McChesney's Free Press seeks to transform the media landscape - on radio, television and the internet - via (amongst other ways) sweeping rules changes at the Federal Communications Commission (FCC). Changes that would dramatically decrease private ownership of the means of news and information delivery, with the federal government assuming an ever greater replacement role.

One intended effect of this shift away from free market media to government-owned media is to diminish what Free Press sees as the inherently right-wing slant of the news that results from corporate ownership. (Have they watched NBC, ABC or CBS - ever?). And in their warped view of the media landscape, conservative and Christian talk radio (which is not news but self-identified opinion) is the most egregious example of this alleged corporatist taint.

Free Press has spent the last seven years developing policy prescriptions and working with like-minded policy and public officials that would make this hoped-for transformational change a reality. And their allies are now in place and in power - at the FCC and in the White House.

It's bad enough we have to bailout banks and auto manufacturers or spread around subsidies for wasteful, inefficient forms of energy like ethanol and morally reprehensible institutions like ACORN and Planned Parenthood.

However, now a couple of the wizards of smart that have managed to land a spot in the editorial pages of The Washington Post are lobbying for journalism subsidies.

In the Oct. 30 Post, the co-founders of Free Press, John Nichols of the liberal publication, the Nation and Robert McChesney, a professor at the University of Illinois at Urbana-Champaign, suggested it's time for the government to prop-up beleaguered journalists to "spawn" so-called independent media. Nichols and McChesney make the case that newspapers are important for two reasons - one not-so important one and one arguably legitimate one. They maintain President Barack Obama believes newspapers are important and that they play an important part keeping government in check. But in order for them to sustain this vital role in our culture, they say it's time for the government to lend a hand. 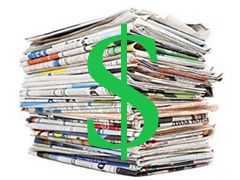 A new report on the state of the newspaper industry in Argentina has found that federal appropriations for newspapers have resulted in less coverage of government corruption. This study goes to the heart of the 'newspaper bailout' debate in this country, and demonstrates the danger of supporting the news media with government funds (h/t Mark Tapscott).