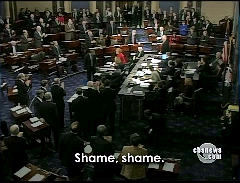 Centering a Friday night story on how, as anchor Katie Couric explained, “Republicans are doing everything they can to block” the “health reform” bill, “including delaying tactics in this race against the clock,” CBS put front and center Senator Robert Byrd's “shame, shame” admonition of Republicans.

Reporter Nancy Cordes began her story by showcasing the aging Democrat: “As he was wheeled into the Senate chamber shortly after 1:00 AM, 92-year-old Robert Byrd made it clear how he felt about being pulled out of bed to vote.” CBS showed a wide-shot of the Senate chamber with the area around the wheelchair-bound Byrd lightened with his words on screen as viewers heard the matching audio picked up by a nearby microphone: “Shame, shame.”

Cordes elaborated: “His ire was directed at Republicans who intentionally dragged out debate on a defense spending bill, hoping that in turn would hold up the health care bill Democrats desperately want to pass before Christmas.” She soon demanded of Republican Senator Orrin Hatch: “What's the point of forcing these votes to be held at the dead of night on Christmas eve? Why not just move along?”

New York Times reporter Sheryl Gay Stolberg paid tribute on Friday to Sen. Ted Kennedy as one of the last remnants of a more collegial, less combative U.S. Senate. But she neglects to point out how Kennedy himself corroded the institution he claimed to hold in such esteem.

In "For Better and for Worse, Senate Has Seen Changes in Kennedy's Time," Stolberg fretted that the Senate "has become coarser, more partisan." But she conveniently skipped Kennedy's own sterling contribution to that coarseness -- his demagogic 1987 attack on conservative Supreme Court nominee Robert Bork.

2008 was the safest year ever to be an American miner. The combined number of fatalities from all forms of mining was the lowest ever.

Yet Ken Ward Jr.'s early-January contribution at the Charleston (WV) Gazette to the spate of final-month Bush-bashing pretended that this data doesn't exist. Instead he gave the impression of an opposite situation. Media outlets have been trying and failing to make this case since the Sago Mine Disaster of January 2006 (at NewsBusters; at BizzyBlog), even while the safety stats have generally showed nearly continuous improvement.

You'll see that Ward also uses a headline that will leave those who recall Barack Obama's campaign promise to bankrupt new coal-powered plants shaking their heads in disbelief (bolds after headlines are mine):

In an MSM eager for the advent of the Age of Obama, Kate Snow may have taken the cake.  The weekend GMA co-host almost sounded as if she were calling for some kind of coup d'etat, musing whether Obama should be urgently "forcing" change before he takes office. How over the top was Snow?  She had to be talked down from her fin de regime fantasy but none other than . . . Paul Krugman.

ABC reporter John Hendren set the tone for the notion that time is dangerously a-wasting.

JOHN HENDREN: As with Hoover and FDR, the ideological gap between Bush and Obama could be too broad to bridge, leaving us with two more months of costly economic drift.

A little later, interviewing Krugman, Snow made her startling suggstion.