Yo, Rev Al: thanks to Al Gore, we've got the internets.  We can look things up.  So when, on your MSNBC show this evening, you ripped Republican Paul Ryan for holding a $15-a-head fundraiser, of course we're going to check out how much President Obama pulled in per head at a recent do.  Turns out it was . . . $38,500!  So what's your point?

The first vote cast by the 110th Congress on January 4, 2007 was for election of Speaker of the House. Rep. Nancy Pelosi (D-Calif.) won all 233 Democratic votes (including her own). All 202 Republicans voted for Rep. John Boehner (R-Ohio. Two years later Pelosi secured 255 (including her own), and there was only one Democrat, one Rep. Gutierrez who did not vote. Minority Leader Boehner received every Republican vote, save for his own and three other Republicans who didn't vote.

By contrast, yesterday's vote for Speaker witnessed a total of 20 Democrats -- 10 percent of the party caucus -- defecting from the Pelosi line. Eleven voted for Blue Dog Democrat Heath Shuler (N.C.) while the other eight generally liberal Democratic defectors voted for other Democrats. And that doesn't include liberal Rep. Peter DeFazio of Oregon, who made sure to absent himself from the chamber so as to not have to register a vote.

It was certainly an inauspicious way for Pelosi to enter the new Congress as minority leader, yet when the Post reported the story, it elected to bury the news in a 6-paragraph digest item on page A8. 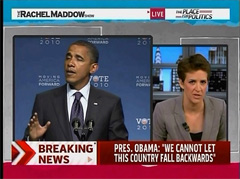 The event was a fundraiser expected to raise $750,000. Two honorary co-chairs of the DNC effort are the actors America Ferrera ("Ugly Betty") and Dule Hill ("The West Wing" and "Psych").

This wasn't a standard presidential press conference or interview. This was a campaign event, aired by Maddow in a four-minute clip and then a five-and-a-half-minute clip, both followed with analysis by liberal Washington Post columnist Eugene Robinson. In both clips, Obama attacked conservatives for ruining the economy and civil discourse, including claims like this: