Goddard College, a small liberal arts college in Vermont, has taken it upon themselves to invite convicted cop killer Mumia Abu-Jamal to speak at their fall commencement ceremony despite the tremendous outcry from the slain officer’s widow and much of the public. While many on the left have supported Abu-Jamal, on Saturday morning CNN host Michael Smerconish slammed the college for their invitation, accusing them of “being completely ignorant in what actually happened in the case.”

On Tuesday's The Kelly File on Fox News Channel, Maureen Faulkner, the widow of murdered Philadelphia police officer Daniel Faulkner, berated the graduating students at Goddard College in Vermont for honoring her husband's killer, Mumia Abu-Jamal, as their commencement speaker: "I am just absolutely outraged that they would have such a hate-filled murderer on as a commencement speaker...he murdered my husband with malice and pre-meditation. He is evil."

Look at footage or photos from just about any protest gathering of left-wing radicals – from the anti-Iraq War rallies to the Occupy movement – and chances are you’ll see it: a T-shirt or a sign scrawled with “Free Mumia.”

Since his 1982 conviction for the murder o Philadelphia police officer Daniel Faulkner made him a cause célèbre, Mumia Abu-Jamal has basked in the adulation of the left. Mumia’s politics – he was a radical ex-Black Panther “journalist” and rabid supporter of the cultish black liberation group MOVE – caused many liberals to believe he’d been set up.

Friday’s New York Times obituary by Bruce Weber of radical lawyer Leonard Weinglass, described in the Times headline as a “Courtroom Defender Of Radicals and Renegades,” glossed over the radicalism of Weinglass’s notorious clients. The text box gushed: “A man one colleague called ‘our era’s Clarence Darrow.’”

Leonard I. Weinglass, perhaps the nation’s pre-eminent progressive defense lawyer, who represented political renegades, government opponents and notorious criminal defendants in a half century of controversial cases, including the Chicago Seven, the Pentagon Papers and the Hearst kidnapping, died on Wednesday. He was 77 and lived in Manhattan.

Weber applied the usual Times gloss to Weinglass's radical clients, referring to Angela Davis, a prominent Communist Party member who twice ran on the party’s presidential ticket, only as an “activist and educator.” Davis also received the Lenin “Peace Prize” from East Germany in 1979, when that country was a Communist police state.

Over the past 40 years, he represented many other prominent clients, including Angela Davis, the activist and educator who was acquitted of murder, conspiracy and kidnapping charges in the 1970 killing of a California judge, and Amy Carter, the daughter of President Carter, who along with others, including Abbie Hoffman, was arrested during a 1986 protest against the activities of the Central Intelligence Agency at the University of Massachusetts. She was acquitted of trespassing and disorderly conduct charges.

By Terry Trippany | October 15, 2008 12:41 PM EDT
The Chicago Tribune caught up with William Ayers at his university office yesterday. While Ayers refused to comment for the reporters he told them from his door, "What could I possibly add? Life happens."

The Tribune notes that the door or William Ayers is decorated with pictures of celebrated cop killer Mumia Abu-Jamal and murderous Cuban revolutionary Che Guevara. These pictures alone contradict the narrative that William Ayers is somehow a repentant former radical:

Agence France-Presse, in a report on Mumia Abu-Jamal, who has been on Pennsylvania's death row for over twenty-five years for the murder of Philadelphia police officer Daniel Faulkner in 1981, referred to the cop killer as a "human rights campaigner." Abu-Jamal, whose birth name is Wesley Cook, had his murder conviction upheld by a panel of the Third Circuit Court of Appeals on Thursday, but the court also decided that either he must receive a life sentence, or receive a new sentencing hearing. 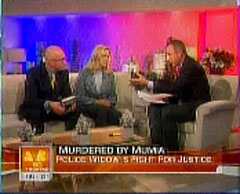 When the widow of the slain police officer killed by Mumia Abu-Jamal appeared on the Thursday "Today" show to promote her new book, NBC's Matt Lauer seemed to take up the cause of the convicted cop killer as he asked Maureen Faulkner mostly skeptical questions like: "Do you ever allow yourself to consider the fact that perhaps he didn't do this?"