On Friday's All In show on MSNBC, host Chris Hayes recounted the recent activities of several Republican political figures which he regarded as examples of GOP members "being jackasses," and coined the Hayes-ism "jackassery" as he used some variation of the word "jackass" 11 times during the segment. After teasing the show, the MSNBC host immediately got to attacking Republicans:

CNN's Soledad O'Brien spun Mitt Romney's words into a dodging-the-question moment for the candidate on the matter of Bain Capital, on Thursday's Starting Point. O'Brien was emphasizing Romney's "reluctance" to mention his days at Bain, which had been the focus of attack ads from the Obama campaign that O'Brien herself justified the other day.

Specifically, she took Romney's interview with Time magazine where he was asked if he welcomed attention about Bain. Romney had answered "of course" and then explained why the American people were more interested in President Obama's record. CNN, however, left out that explanation.

As NewsBusters has been reporting, the media have been on a full-court press in recent days supporting the President's push to raise taxes.

Doing his part was NBC's David Gregory who trotted out the words of former Vice President Walter Mondale on Sunday's "Meet the Press" to really drive home the point, and then got a huge assist from former Federal Reserve Chairman Alan Greenspan (video follows with transcript and commentary): 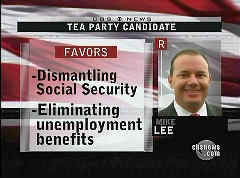 ABC, CBS and NBC all ran full stories Monday night on how an old video clip showed Delaware Republican Senate candidate Christine O’Donnell talking about how, as a high-schooler, she had “dabbled into witchcraft.” CBS, however, used O’Donnell to pivot to marveling at how other Tea Party-affiliated Senate candidates remain viable despite what CBS considers exotic views.

“Christine O'Donnell's witchcraft comments may have spooked some Republican leaders,” Nancy Cordes related on the CBS Evening News, “but her fellow Tea Party Senate candidates are living prove that unusual assertions are not necessarily campaign killers.” Cordes elaborated with some contestable summaries of positions expressed:

Take Kentucky's Rand Paul who questioned the historic civil rights act, but is still tied with the Democrat in a recent poll. Nevada's Sharron Angle is neck and neck with Senate Majority Leader Harry Reid, even after she advocated an armed insurrection against the government. And Utah attorney Mike Lee is crushing his Democratic rival even though Lee favors dismantling Social Security and eliminating unemployment benefits. Priorities he shares with Alaska's Joe Miller.