On Thursday night's PBS NewsHour, anchor Judy Woodruff interviewed Donna Zaccaro, who has made a new documentary about her mother, Geraldine Ferraro and her historic nomination for vice president in July of 1984. Like Nancy Pelosi's daughter Alexandra, Zaccaro was a longtime producer for NBC News before becoming a filmmaker.

In a film clip, NPR’s Cokie Roberts gushes about the moment at the convention with Ferraro, “Standing up there all in white, looking like this tiny little figure, but looking beautiful and looking female.” Woodruff added she was there, too, and “I remember. It was a special moment for women in — no matter who you were, what party you were in.” But Zaccaro thought Sarah Palin’s nomination in 2008 wasn't a bipartisan moment. It meant nothing:

In the Sunday New York Times obituary for liberal Democrat 1984 vice-presidential nominee Geraldine Ferraro, Douglas Martin presented her as "hounded" by sexist anti-abortion conservatives who would metaphorically persecute her to death:

The abortion issue, magnified because she was Roman Catholic and a woman, plagued her campaign. Though she opposed the procedure personally, she said, others had the right to choose for themselves. Abortion opponents hounded her at almost every stop with an intensity seldom experienced by male politicians.

Writing in The Washington Post in September 1984, the columnist Mary McGrory quoted an unnamed Roman Catholic priest as saying, “When the nuns in the fifth grade told Geraldine she would have to die for her faith, she didn’t know it would be this way.”

Like many liberal media outlets totally apoplectic over Sarah Palin being John McCain's running mate, the New York Times has continually questioned her qualifications as having "only" been a governor and a mayor.

Yet, 24 years ago, when presumptive Democrat presidential nominee Walter Mondale was considering who his running mate should be, the Times editorial staff asked, "Where is it written that only senators are qualified to become President," as it made the case that the women on Mondale's list were qualified despite lacking senatorial experience.

Is this because those were Democrats and Palin is a Republican? If the first woman ever nominated Vice President by a major political party left the door open to voting for the second such woman EVEN if she was in the opposing political party, would that be newsworthy?

Well, on Saturday, Geraldine Ferraro told NPR that she hasn't decided who she's going to vote for in November, while also stating that whatever Sarah Palin doesn't know about foreign policy "she will learn very quickly - she seems smart enough."

CBS’s Smith Talks to Geraldine Ferraro on Obama VP; Bashed Her During Primaries

On Wednesday’s CBS Early Show, co-host Harry Smith talked with former vice presidential candidate, and Hillary Clinton supporter, Geraldine Ferraro about Barack Obama’s VP pick: "And we have a special guest in the studio with us this morning. Geraldine Ferraro was the vice presidential running mate...for Walter Mondale just a couple of years ago...We'll see if Geraldine has some insight for us this morning." While Smith referred to Ferraro as a "special guest," on March 13 he described her "dark side," her "Archie Bunker side," after she suggested part of Obama’s popularity was due to him being black.

Despite those past insinuations of Ferraro being racist, Smith went on to get her predictions of possible VP picks for Obama, mentioning Joe Biden, Evan Bayh, and Kathleen Sebelius as contenders. Toward the end of the segment, Smith brought up Clinton, holding up a picture of the New York Senator: "Here's the one. Here's your pal." Ferraro confessed: "I love Hillary." Smith added: "Right. And here's the thing, among registered Democrats and among people going to the convention, she polls higher than anybody by a ton." Ferraro replied: "She does. You do recall that she got 18 million votes in the primary...I mean, there's a real reason. Because people feel very strongly that she would be an incredible leader. Now whether or not she would want something like that. I think she'd do whatever he wanted her to do."

Don't feel bad for Geraldine Ferraro. Looks like the Hillary supporter who got into hot water back in March for claiming Obama's race was an advantage has landed on her feet, scoring a gig with the English-language edition of the People's Daily, the official organ of the Chinese Communist Party.

For some reason, Geraldine apparently decided to adopt a pen name, writing as "Ding Gang." Perhaps a Chinese-language expert out there can explain the hidden meaning behind her choice of alias.

What's that? The author of Obama Phenomenon in U.S. appearing in today's People's Daily isn't Ferraro? It really is by a guy named Gang? Well, can you blame me for thinking I saw Gerry's hand at work in Gang's article? Compare and contrast the comments that put Ferraro in the MSM doghouse, provoking Olbermann into a scatching Special Comment, with Gang's take:

FNC's Wallace on Spitzer: 'Gosh, What an Idiot'

Fox News's Chris Wallace was once again Steve Malzberg's guest on WOR radio Thursday, and the host of "Fox News Sunday" made some comments about Eliot Spitzer, Geraldine Ferraro, and the current Democrat campaign for president that are guaranteed to raise eyebrows on both sides of the aisle.

In an interview that covered many subjects, Wallace said of Spitzer, "Gosh, what an idiot," while strongly disagreeing with Geraldine Ferraro's recent statements about Barack Obama, and concluded by saying that the "identity politics" the Democrats have been playing for years "is now coming back to bite them, big time" in such a fashion that it could "tear the Party apart."

To get things rolling, Malzberg asked his guest about the Spitzer resignation (15-minute audio available here):

Following the same pattern as ABC’s "Good Morning America" Wednesday’s CBS "Early Show" featured a glowing interview with Barack Obama by co-host Harry Smith, while co-host Russ Mitchell interrogated Clinton supporter Geraldine Ferraro for recent comments about Obama’s candidacy: "Do you really think that Barack Obama has been so successful in this campaign because he's a black man?"

When Ferraro tried to respond and put her comments in context, Mitchell abruptly interrupted:

FERRARO: Well, let me take -- put this in context. Number one, what they're using this as a political thing to attack Hillary. I am not involved in the Hillary Clinton campaign, I was out on a paid speech which had been booked a year and a half ahead of time --

MITCHELL: I understand that, not a lot of time Congresswoman.

MITCHELL: Why did you make these comments and do you really think that he's ahead because he's black?

Meanwhile, earlier in the broadcast Harry Smith asked Obama about Ferraro’s comments: "Senator, Hillary Clinton's campaign has basically said, 'well, we disagree with what Geraldine Ferraro has said.' Is it time that they, if you excuse my expression, denounce what she said?"

In a striking resemblance to a pair of recent "Saturday Night Live" skits, the March 12 edition of "Good Morning America" began with a fawning interview of Barack Obama, then grilled Hillary Clinton supporter Geraldine Ferraro.

Co-host Chris Cuomo first congratulated Obama for his Mississippi victory, then questioned if it "seals the deal." Cuomo added he is "sure you’re [Obama] gaining the confidence that you have a very good change of winning the ticket." Cuomo then pressed for an Obama/Clinton or Clinton/Obama ticket then asked Obama for a reaction to Geraldine Ferraro’s allegedly racially charged comments. To conclude the interview, inquired into Obama’s familial for the next six weeks leading to Pennsylvania.

Immediately following the interview, co-host Diane Sawyer spoke with Ferraro herself on her controversial statement that "if Obama was a white mane, he would not be in this position." The tone and the questions were noticeably tougher. Sawyer challenged Ferraro’s assertion that she is not directly involved with the Clinton campaign. Sawyer also noted Obama’s popular vote totals and the 11 senators that support him, asking if they’re just caught up in "the concept." In the end, Sawyer asked if Ferraro is "sorry" for her statement.

Olbermann: Ferraro Statement 'Clearly Racist: Are We in South Africa?'

Forget the popcorn: it could take a case of Cognac and a humidor of good cigars to fully savor the warfare that's breaking out in Dem ranks. Who could have predicted that Keith Olbermann would be accusing a prominent Clinton team member and former Dem VP candidate of making a "clearly racist" statement evoking the apartheid era in South Africa? And yet . . .

On this evening's Countdown, Olbermann and Newsweek's Howard Fineman were discussing Geraldine Ferraro's remarks about Obama and the way the Clinton campaign, far from denouncing them, sent out campaign manager Maggie Williams to try to turn the tables, accusing Obama of "false, personal and politically calculated attacks" for having the audacity to complain. 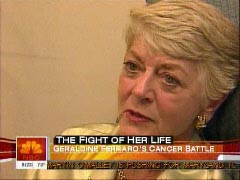 NBC’s "Today" Show’s heart-touching feature on Geraldine Ferraro’s blood cancer survival on Friday morning gave a hint at the ulterior motive that they had for running it. Substitute host Ann Curry introduced the segment, a "Today’s Update" feature by gushing, "She’s always been a ground-breaker, and she is still at it."