Newsweek's Advice to Christine O'Donnell: Submit to a Husband and Open a Wiccan Store

After getting spanked in the November 2 election, Christine O'Donnell needs to find herself a good Christian man to submit to. Or she could open a Wiccan supply store.

Those are just two of the six mocking suggestions that Newsweek's David Graham came up with yesterday on the magazine's The Gaggle blog for the Delaware Republican Senate nominee's future.

Graham's list is just more evidence that O'Donnell seems to have inherited Sarah Palin's mantle as the conservative female politician liberal journalists most love to write arguably misogynistic screeds against (emphasis mine):

It is interesting and disappointing that so many politicians treat "faith" — at least the Christian faith — as a poison pill they cannot touch, much less swallow. Republicans often run from it because of PC intimidation, and Democrats because it's in their DNA to do so.

Airing rare stories on a U.S. Senate debate, ABC, CBS and NBC all ran full reports Thursday night on the only race they repeatedly find newsworthy, one in which the Republican is behind by double-digits, as ABC and CBS exploited the Delaware debate to regurgitate ridicule for Sarah Palin.

“[Christine] O'Donnell's toughest moment came when she was asked to name a recent Supreme Court decision with which she disagreed,” asserted CBS's Nancy Cordes, “a question that also tripped up her mentor, Sarah Palin,” back in 2008. On ABC, Jonathan Karl echoed how “O'Donnell got tripped up when asked to name a Supreme Court decision she disagrees with,” which Karl called “a flashback to 2008 when another candidate got asked the same question.” 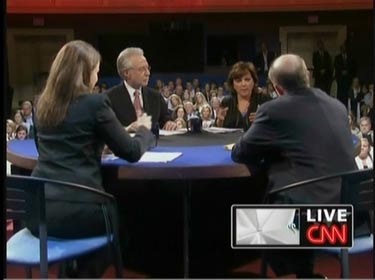 CNN's Wolf Blitzer and former public television anchor Nancy Karibjanian pressed Republican candidate Christine O'Donnell during Wednesday's Delaware Senate debate. While the two pressed O'Donnell on her personal finances, her past comments on evolution, and SNL poking fun of her, Karibjanian went out of her way to note Democratic candidate Chris Coons's past as a "student pastor at Yale."

The first hour of the debate, which was held at the University of Delaware, aired on CNN starting at 7:30 pm Eastern. In her very first question to O'Donnell, the former WHYY personality raised the Republican's past financial difficulties:

KARIBJANIAN: Let's open the discussion on correcting some of the financial issues here by talk about some of your own personal financial problems, and most people know about it by now, including an IRS lien that was for about $12,000 in taxes and penalties from '05. There was the '08 mortgage default judgment on your home. You just received your bachelors degree, as you said, because it took a decade to pay off the tuition. The question, then, is, how can voters rely upon your thoughts on how to manage the deficit if you're having such personal financial issues of your own?

NBC's Meredith Vieira previewed Thursday's Today show coverage of the Delaware Senate debate by teasing viewers about "the one question that left [Christine] O'Donnell struggling for an answer" but Vieira, nor Kelly O'Donnell in her full report, bothered to note her Democratic opponent, Chris Coons, completely fumbling a basic question about property taxes. NBC's Kelly O'Donnell excerpted a moment from the debate unfavorable to Christine O'Donnell as she relayed: "On the Supreme Court O'Donnell stumbled much like Sarah Palin, when asked to name a recent decision she opposes." However Kelly O'Donnell failed to excerpt an embarrassing moment for Coons when he stumbled on a question about raising property taxes three times in one year, as he awkwardly responded: "Research into what would reveal that, it's difficult, it's complicated."

NBC's O'Donnell also, not surprisingly, highlighted Christine O'Donnell's "controversial witch comments" as she accompanied a sound bite from the debate on the topic with a clip from Bill Maher's old Politically Incorrect show, but when it came to mentioning Coon's past the NBC correspondent matter of factly noted: "Coons comes from a wealthy family and has two graduate degrees from Yale."

The following teaser and full segment were aired on the October 14 Today show:

At the top of Thursday's CBS Early Show, co-host Maggie Rodriguez teased an upcoming report on Wednesday's Delaware Senate debate by proclaiming: "U.S. Senate candidate and tea party favorite Christine O'Donnell is grilled in her first highly-anticipated debate, where she addresses everything from witches, to China, to late-night TV jokes."

Rodriguez's declaration was later followed by a completely one-sided report from congressional correspondent Nancy Cordes, who focused exclusively on O'Donnell being interrogated over past statements: "Well, this debate involved two candidates, but the spotlight was really on one of them, Christine O'Donnell, and her history of controversial comments."

After playing clips of moderators, CNN anchor Wolf Blizter and Delaware First Media's Nancy Karibjanian, grilling O'Donnell, Cordes mockingly remarked: "Outside the auditorium, several witches milled about, some for O'Donnell, some against." She then noted how O'Donnell's "now infamous ad came up more than once."

On Thursday's Good Morning America, reporter Claire Shipman knocked Christine O'Donnell for a "cringe-inducing" answer during a debate, Wednesday, but downplayed and ignored awkward moments from the candidate's Democratic opponent. Shipman derided, "But, while she was quick to accuse her opponent of politics as usual, she stumbled on a question that many consider to be Politics 101."

Co-host George Stephanopoulos teased, "And in last night's debate, what seemed to stump Tea Party star Christine O'Donnell?" Asked by Nancy Karibjanian, one of the moderators, what Supreme Court decision she most disagreed with, the Delaware Republican didn't have an answer.

An ABC graphic dismissed it as a the "Tea Party star's Palin moment." After playing the clip Shipman chided, "Ouch. It was cringe-inducing, George." [MP3 here. Click on read more to see video.]

So now we know what Norah thinks of that other O'Donnell, Christine.  On today's Morning Joe, the MSNBC O'Donnell referred to the Delaware Senate candidate as a "freak show."

Norah's nasty gibe was a segue off Mike Barnicle's observation that people were fascinated by the miner rescue story because, amidst all the artifice of politics and culture, it was something real. 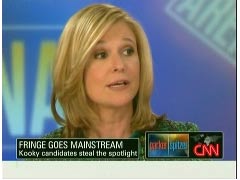 On Monday's Parker-Spitzer, CNN's Kathleen Parker picked up where her co-host Eliot Spitzer left off on Friday, bashing conservatives as "fringe elements" inside the Republican Party. Parker continued the Tea Party movement was the result of the GOP "catering" to such elements and that "the kooks have come home to roost."

The pseudo-conservative columnist returned to her old habit of attacking conservatives during a panel discussion with Reason magazine's Nick Gillespie and NPR contributor John Ridley minutes into the 8 pm Eastern hour. Gillespie criticized how both Republicans and Democrats handled the past decade: "It's really awful, and we had- you know, six years of Republican rule, which was awful and disastrous on every level, and everything since then has been equally bad." The writer continued with a commentary on the phenomenon of Republican Senate candidate Christine O'Donnell selection in Delaware: 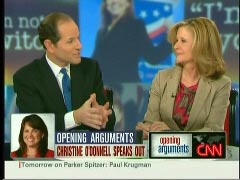 Eliot Spitzer returned to attacking the Tea Party and their allies on Thursday's Parker-Spitzer, lamenting that people "kind of from the fringe" like Christine O'Donnell "seem to be taking over the Republican Party." Guest Bernard-Henri Levy also joined in the Tea Party bashing, labeling the movement "really crazy" and insulted Sarah Palin as being less "American" than President Obama.

The new CNN program led the 8 pm Eastern hour with a replay of correspondent Jim Acosta's interview of Delaware Republican Senate candidate O'Donnell, which first aired earlier in the day. Once the interview finished, the former New York governor launched into his lamentation of the supposed takeover of the GOP, and invoked a past failed Republican presidential candidate as he continued:

SPITZER: Why there are so many folks like her [Christine O'Donnell] who seem to be taking over the Republican Party? I mean, this is not Bob Dole's Republican Party anymore- thoughtful, serious people. This (sic) is people who are kind of- I hate to say it, but kind of from the fringe.

Newsweek's list of arguments against O'Donnell is simply too bizarre to believe: