NBC Brings More Raunch to Primetime with Launch of 'Chelsea'

From the network that brought you the failed show, "The Playboy Club," NBC is now offering more trashy television with the new primetime comedy, "Are You There, Chelsea?" based on the book by comedienne and host of "Chelsea Lately," Chelsea Handler. The sitcom, which premiered January 11, centers on the life of Chelsea Handler, a bartender who prays to Vodka, drinks heavily without regret and has a provocative and public sex life.

The previews promoting the season premiere show viewers that "Chelsea" will take them on an alcohol-infused adventure in which anything goes. One preview begins with Chelsea (Laura Prepon) getting pulled over for drunk driving, blowing into a breathalyzer and then thrown in jail. Judging by the accompanying laugh track, viewers are supposed to find the potentially fatal, law-breaking behavior funny.

Appearing as a guest on Thursday's Chelsea Lately show on the E! network, HBO comedian Bill Maher declared that he recently told former GOP presidential candidate Herman Cain, who will be appearing as a guest on tonight's Real Time show on HBO, that "I don't, like, hate your f------ guts,"  soon adding, "like I hate Newt Gingrich," inspiring agreement on hating the former House Speaker from host Chelsea Handler.

Appearing as a guest on Thursday's Chelsea Lately show on the E! network to promote his book, The New New Rules, HBO's Bill Maher denied that a sexual joke he made last February about ABC's Elisabeth Hasselbeck and CBS's Lara Logan was a reference to the rape of Logan in Egypt from that month, as he recounted that he actually made the joke on his Real Time show before Logan's sexual assault occurred.

By Catherine Maggio | June 2, 2011 10:53 AM EDT
When, in a recent New York Times interview, Comedian Chelsea Handler expressed disgust with the MTV show "16 and Pregnant," pro-lifers (and fans of traditional morality) might have had reason to hope. "Getting rewarded for being pregnant when you're a teenager?" she fumed, "Are you serious? I mean, that makes me want to kill somebody."

Unfortunately, that somebody is a fetus. She went on to speak proudly of her own experience. "I had an abortion when I was 16," she stated. "Because that's what I should have done. Otherwise I would now have a 20-year-old kid. Anyway, those are things that people shouldn't be dishonest about it."

Late night talk show host and author Chelsea Handler was invited on Tuesday's Today show to plug her new book Chelsea Chelsea Bang Bang and couldn't leave the show without taking a dig at earlier guest Karl Rove, as well as Sarah Palin who she called "Really stupid." When asked by 10:00am hour Today host Hoda Kotb how she felt about having her book released at the same time as the former White House advisor's the E! talk show host quipped she was worried about competing for the "stupid" audience with him and Palin, as seen in the following exchange that was aired on the March 9 Today show: [audio available here]

KATHIE LEE GIFFORD: It is, it is, It's laugh out loud though, it really is.

GIFFORD: I've been reading it since we got it, for a couple weeks. I'm not a slow reader. It's just that I just read it in the morning.

CHELSEA HANDLER: Well it's an easy. It's like a third grade reading level.

GIFFORD: It's an easy read! Yes.

HANDLER: I like to write for my audience and I know that my audience are going, mostly going through some tough times.

KOTB: What do you think about your book coming out at the same time as Karl Rove's? 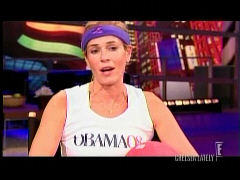