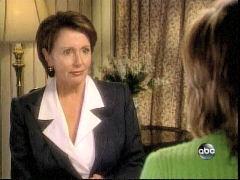 The New York Times sure doesn't like it when Republicans fail to give proper respect to Democratic politicians. Here's Mark Leibovich in his Tuesday story from the home district of House Speaker Dennis Hastert, "Controversy Gives Hastert Time at Home."

"Mr. Hastert is also fueled by what appears to be a genuine dislike of Representative Nancy Pelosi, the House minority leader, who would be speaker if Democrats gained 15 seats next week. To invoke Ms. Pelosi as speaker is a Republican talking point, but when Mr. Hastert does it, it smacks of disdain.

"Asked if he has spoken to her recently, Mr. Hastert grimaces and says Ms. Pelosi called him last week 'to read me the riot act about something.' He adds: 'She’s scripted, and you don’t really get a word in edgewise. You don’t get a lot of dialogue.'"

But there's nothing in the Times today about Pelosi's "genuine dislike" of Republicans, a group that she regularly describes in interviews and campaign appearances as "unconcerned about money, truth or decency."

There was more oversensitivity toward Republican criticism shown by the Times' chief political blogger Kate Phillips in a post titled "The Cheney Slapdown," about Lynne Cheney taking on CNN for running footage of insurgents in Iraq killing Americans, footage given to CNN by an Iraqi terrorist group.

"We told you the other day about how the Second Lady, Lynne Cheney, became quite irate on CNN and literally scolded Wolf Blitzer repeatedly....In addition, she staunchly defended her husband, and bawled out CNN for using footage that showed terrorists shooting Americans on one of its cable news specials."