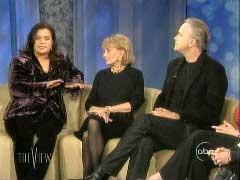 Rosie O’Donnell took another vicious swipe at the Bush administration and its efforts to combat terrorism during Tuesday’s ‘The View.’ Liberal actor Tim Robbins appeared on the program to promote his latest film ‘Catch a Fire,’ set in apartheid-era South Africa. In the film, Robbins portrays a white police officer who tortures a black South African man, wrongfully accused of sabotage of an oil refinery. While discussing the film and his character, co-host Rosie O’Donnell equated the brutal tactics used against the people of South Africa by its own government with the Bush administration’s Patriot Act.:

Rosie O’Donnell: "They were seeking out terrorists, which is what they called the people in South Africa who actually lived there, who were the majority. The blacks in South Africa, who were trying to fight for their own civil rights, were called terrorists and the government was allowed to arrest them at will and interrogate them, no matter what they did, just on the suspicion. Very similar today to what we have in the United States, thanks to the Patriot Act."

Elisabeth Hasselbeck briefly defended the anti-terror legislation, before being cut off by Robbins and O’Donnell, who went on to compare further "similarities" between South Africa under apartheid and President Bush’s America:

Elisabeth Hasselbeck: "Well, and the Patriot Act, I’m sorry, protects us. But that's a whole different story, but this–"

Robbins: "And they allowed the, the government and actually required people like this guy I play to torture people. And I’m, so, so what it does to the individual is it, it puts an incredible moral burden on the agent of the government, the, the soldier or the policeman–"