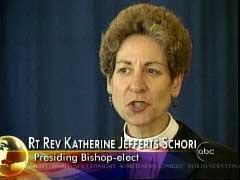 Predictably, following what I suggested yesterday, ABC's "World News Tonight" hailed the election of the new female Presiding Bishop of the Episcopal Church USA as a "milestone" and a "significant advance for women in religion." To the media elite, it is a political victory for feminism, and the religious angle is barely worth mentioning.

ABC reporter Dan Harris hailed Bishop Katherine Jefferts Schori for denting the "stained glass ceiling," but said nothing about her theological beliefs, including her expressing the liberal view on CNN that homosexuality "is not a sin." The battle over gay clergy and "marriage," not female leaders, is the real battle in the Anglican Communion.

Harris just mangled the facts when he turned to claiming "a grandmother in Pennsylvania will be ordained as a Catholic priest...one the Vatican will not condone." So if the Vatican will not recognize the ordination, is it an ordination? In fact, Cardinal Ratzinger (now Pope Benedict XVI) excommunicated women claiming to be priests. Let's go secular with this argument. If I decided to buy a microphone and a TV camera, and I put ABC logos on them, am I an ABC reporter? Or does ABC think I don't need to be officially recognized as an ABC reporter before I go around town claiming to be ABC?

The Catholic League's Bill Donahue took off after ABC with characteristic gusto for mangling the facts today:

Some at ABC News are obviously hyperventilating over the election of the first female presiding bishop in the Episcopal Church, and that no doubt led them to package this story with a bogus account about women being ordained as Catholic priests.  Joan Clark Houk, and seven other women, will hold an ‘ordination’ ceremony on a boat in Pittsburgh on July 31, but no one save mad feminists will give it any credence.  Indeed, this happens every day in the asylum: some actually think they’re the pope.

ABC News also errs in thinking that this make-believe game has never been played before.  In 1981, AP picked up on a story by the National Catholic Reporter which said a woman ‘has been ordained and has been performing the duties of a priest for the past year.’  In 1996, Catholic World Report ran a story on a meeting of the Women’s Ordination Conference (which supports next month’s game) wherein four women dressed as Catholic bishops and then ‘solemnly blessed the audience as they made their way to a stage that was filled with dancing women.’  And just last month, Victoria Rue, wearing a white robe, appeared before a crowd in San Jose and declared, ‘I am a Roman Catholic woman priest.’

In other words, this madness is old hat.  Nonetheless, I am asking David Westin at ABC News for an on-air clarification of this bogus story.

Here's the transcript, to give you the complete feminist flavor:

Charles Gibson: It's been a milestone decision, taken by the Episcopal Church, as Katherine Jefferts Schori has been elected to head the group. She becomes the first woman to lead a branch of the Anglican Communion, which has 77 million members worldwide. Schori’s appointment is a significant advance for women in religion. It is also controversial. As ABC’s Dan Harris explains.

Harris: Bishop Jefferts Schori says her election to the top job in the Episcopal Church is a dent in the so-called "stained glass ceiling," centuries of male domination.

Schori: My election to this position says that the bishops of this church are able to make decisions without regard to the gender of the person being considered, which is what we're all hoping for across the board.

Harris: But that is not what everyone's hoping for across the board. Bishop jefferts schori's election threatens to split the episcopal church in the U.S., And across the world.

Rt. Rev. Robert Duncan, Episcopal Bishop of Pittsburgh: It breaks my heart. I was born into this church. And what this church has done has embraced a revolutionary agenda, rather than a part of mainstream Christianity.

Harris: Starting in the early '70s, as the women's movement gained steam, more women began entering the ministry. Presbyterians, Episcopalians, United Methodists and American Baptists now regularly ordain women. But that's a relatively small percentage of American Christians. Most evangelical denominations, as well as the Catholic Church, steadfastly refuse to ordain women. Nevertheless, in late july, Joan Clark Hauk, a grandmother from Pennsylvania, will be ordained as a Catholic priest, along with seven other women. It will be the first ceremony of its kind in this country, and one the Vatican does not condone.

Hauk: I am asking the church to turn away from the sin of discriminating against women and blaming it on God.

Schori: I've discovered that one can build relationships with almost anyone who will talk with you.

Harris: To those pushing up against the stained glass ceiling, one critic recommends the famous prayer, "God, grant me the serenity to accept the things I cannot change." For some Christian women, however, that's just not good enough. Dan Harris, ABC News, New York.

UPDATE: And here is a snippet of the Presiding Bishop-Elect on CNN's "Live From" on Monday afternoon, checked against the recording:

KYRA PHILLIPS: You supported the ordination of Gene Robinson, the first openly gay bishop. Tell me why?KATHARINE JEFFERTS SCHORI, NEW LEADER OF EPISCOPAL CHURCH: Because I had a sense that the dioceses of New Hampshire who elected him recognized the gifts in him, gifts that were eminently well suited to the challenges of ministry in that place. They knew him, they have known him for 20 years. They had a clear sense of who he was and they believed that God was calling him to be their bishop.PHILLIPS: So is it a sin? Is it against god's will? Is it wrong to be gay?SCHORI: I don't believe so.PHILLIPS: Tell me why?SCHORI: I believe that God creates us with different gifts. Each one of us comes into this world with a different collection of things that challenge us and things that give us joy and allow us to bless the world around us. And some people come into this world with affections ordered toward other people of the same gender and some people come into this world with affections directed at people of the other gender.