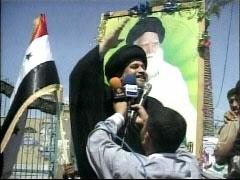 On Wednesday two correspondents reporting from Iraq had dramatically different takes on the protest by followers of Muqtada al-Sadr, who were said to be upset by President Bush’s recent trip to Baghdad. NBC reporter Richard Engel described it as "a relatively small" protest while Lee Cowan of CBS said protesters’ anger had "boiled over".

On the Wednesday CBS Evening News Lee Cowan offered this description of the protests, "Anger over the U.S. presence here and the President’s surprise visit yesterday boiled over. Thousands of followers of radical Shiite cleric Muqtada al-Sadr made it clear again today that the 130,000 U.S. troops still in Iraq should withdraw immediately and leave Iraq to its own devices."

But earlier Wednesday in an appearance on Imus in the Morning Richard Engel included more facts in his report, "There have been some protests of people. There was a small protest today by Muqtada al-Sadr, but it was a relatively small one. There were about 2,000 people there according to witnesses but Muqtada al-Sadr can, if he wanted to, could arrange a protest with tens of thousands quite quickly."

About an hour after the report by Engel, Don Imus talked with CBS anchor Bob Schieffer:

Imus: "I was talking with Richard Engel, who is an outstanding reporter--"

Bob Schieffer: "He really is."

Schieffer: "I wish he worked for CBS, to tell you the truth."

Lee Cowan now is probably the only one at CBS looking forward to Katie Couric replacing Schieffer.