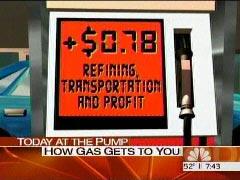 Not if you're the Today show. Not if you want to camouflage the fact that, in fact, the government's take via taxes dwarfs the amount that the various levels of commerce take in profit. 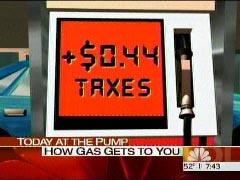 In conjunction with the appearance of Chevron CEO David O'Reilly, this morning's 'Today' ran just such a graphic display of the components of the price of a gallon of gas. The first panel showed that the cost of crude oil contributes $1.67 per gallon. Next was taxes, 44 cents. Now, you might have thought that the final panel would have shown profit. But no. Instead of separating out profit, Today displayed a panel mystifyingly lumping in profit with "refining and transportation" for a total of 78 cents, or roughly double government's tax take.

If only three panels were to be displayed, it would have been logical to have crude oil, refining and transportation lumped together, since they are all costs. Taxes and profit would then have been displayed separately.

So why did Today lump taxes with refining and transportation costs? The strategy seems clear. If shown separately, viewers would have seen that profit amounts to a fraction of taxes. Whoops - there goes the gouging/windfall taxes argument so dear to the MSM and politicians looking to deflect and demagaogue the issue. Better to lump in profit with a couple of entirely unrelated cost items to "pump up" the number and make it substantially higher than taxes.

Finkelstein, recently a guest on the Lars Larson Show, lives in the liberal haven of Ithaca, NY, where he hosts the award-winning public-access TV show 'Right Angle'. Contact him at mark@gunhill.net