NBC's Better Billing for Iranian Prez Than Our Own, Matt Wants Meetings With Mahmoud 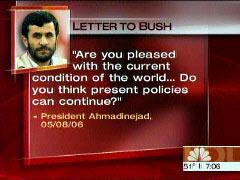 Check out the screen capture from this morning's Today show.  NBC respectfully describes the Iranian head of state - he of the threats, among other things, to wipe Israel off the map - as "President Ahmadinejad."  And our own president?  He's just "Bush."

Today aired the graphic in the course of Matt Lauer's interview of Secretary of State Condoleezza Rice.  Despite mental meanderings in Ahmadinejad's letter that prompted the Wall Street Journal to editorialize this morning about "Crazy Mahmoud", Lauer seemingly attached great significance to the missive, repeatedly pressing Secretary Rice to seize the occasion to open direct talks with the Iranians.  In doing so, Lauer was perhaps channeling former Clinton National Security Advisor Sandy Berger, who just yesterday wrote a column in the Wall Street Journal urging the administration to commence such talks with a view to settling "all issues of mutual concern." 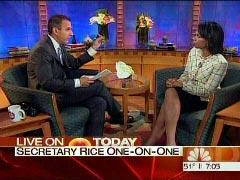 As the WSJ editorial pointed out: "We have deep doubts about this course, not least because every previous U.S. attempt at engagement -- Presidents Carter, Reagan and Clinton all tried -- was spurned and taken as a sign of weakness."

Consider too the substance of Ahmadinejad's letter.  He wrote:

"Those with insight can already hear the sounds of the shattering and fall of the ideology and thoughts of the liberal democratic systems. We increasingly see that people around the world are flocking toward a main focal point -- that is the Almighty God. . . . My question for you [Mr. Bush] is, 'Do you not want to join them?'"

Translation: democracy has failed.  Iranian-style theocracy is the wave of the future.  Get on board.  Despite what came close to a 'we will bury you' statement of the triumph of radical Islam, Lauer repeatedly pressed Rice on opening direct talks with Iran:

Lauer: "You seemed to have dismissed this letter rather quickly, why?"

Lauer: "Wasn't the correspondence, even the opening of a door . . . let me read you what the former Iranian ambassador of France said on Tuesday: 'The letter could have been a turning point in relations, but Rice squandered the opportunity with a hasty reaction. This gives a pretext to those in Iran to oppose re-establishment of ties with America.'"

Lauer: "Some serious-minded and well-experienced people [Berger/Albright?] in diplomacy have said 'why not just sit down with the Iranians'?  What's the simple reason for that?"

Lauer: "What about face-to-face, one-on-one?"

By the way, please have another look at that screen graphic, this time reading the message itself.  Are we sure it was "President Ahmadinejad" who wrote it, or could it have been the work of another respected leader, say "House Minority Leader Nancy Pelosi"?

Finkelstein, recently a guest on the Lars Larson show, lives in the liberal haven of Ithaca, NY, where he hosts the award-winning public-access TV show 'Right Angle'. Contact him at mark@gunhill.net