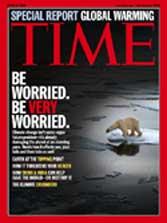 The problem with advocacy journalism is that once one has switched from “mediator” to “advocate,” the other side becomes the “adversary” — and news stories have all the fairness of campaign commercials.

On the issue of global warming, the media are cursed with a surplus of advocates and a paucity of real journalists. This week’s Time cover story, for example, begins with the kind of fear-mongering that liberals find so offensive when it crops up in debates about the war on terror. Time’s cover screams: “BE WORRIED. BE VERY WORRIED,” with the word “VERY” in bright red letters, in case anyone missed the point.

Imagine if Vice President Cheney asked us to “be worried, be very worried” about al Qaeda or the spread of weapons of mass destruction. Time would be at the front of the liberal media mob, hissing for an end to politically-motivated scare tactics.

Then Jeffrey Kluger launches into one of the magazine’s regularly-scheduled panic stories about the end of Planet Earth, which Time’s cover officially declared “endangered” during the second Reagan administration. Here’s how he opened the 2006 version:

No one can say exactly what itÂ looks like when a planet takes ill, but it probably looks a lot like Earth. Never mind what you've heard about global warming as a slow-motion emergency that would take decades to play out. Suddenly and unexpectedly, the crisis is upon us.

It certainly looked that way last week as the atmospheric bomb that was Cyclone Larry--a Category 5 storm with wind bursts that reached 180 m.p.h.--exploded through northeastern Australia. It certainly looked that way last year as curtains of fire and dust turned the skies of Indonesia orange, thanks to drought-fueled blazes sweeping the island nation. It certainly looks that way as sections of ice the size of small states calve from the disintegrating Arctic and Antarctic. And it certainly looks that way as the sodden wreckage of New Orleans continues to molder, while the waters of the Atlantic gather themselves for a new hurricane season just two months away. Disasters have always been with us and surely always will be. But when they hit this hard and come this fast--when the emergency becomes commonplace--something has gone grievously wrong. That something is global warming.

In case you were looking for balance, Kluger assures that none is needed. “In the past five years or so, the serious debate has quietly ended,” he writes. So anyone left dissenting is presumed unserious?

After that, Kluger offers a quote from a representative of the environmentalist lobby: “‘Things are happening a lot faster than anyone predicted,’ says Bill Chameides, chief scientist for the advocacy group Environmental Defense and a former professor of atmospheric chemistry. ‘The last 12 months have been alarming.’”

Do you think that the chief scientist from Exxon-Mobil would get the same chance to help craft a cover story’s spin?

After telling us that the North and South poles are melting, vast areas of the world are being tipped into drought, wildfires are rampaging through forests, and “environmentalists can tick off scores of species that have been determined to be at risk as a result of global warming,” Kluger moves on to politics, where he abandons any pretense of reporting to push the environmentalist lobby’s line:

It’s undeniable that the White House’s environmental record — from the abandonment of Kyoto to the President’s broken campaign pledge to control carbon output to the relaxation of emission standards — has been dismal. George W. Bush’s recent rhetorical nods to America's oil addiction and his praise of such alternative fuel sources as switchgrass have yet to be followed by real initiatives....

Increasingly, state and local governments are filling the void. The mayors of more than 200 cities have signed the U.S. Mayors Climate Protection Agreement, pledging, among other things, that they will meet the Kyoto goal of reducing greenhouse-gas emissions in their cities to 1990 levels by 2012. Nine eastern states have established the Regional Greenhouse Gas Initiative for the purpose of developing a cap-and-trade program that would set ceilings on industrial emissions and allow companies that overperform to sell pollution credits to those that underperform-- the same smart, incentive-based strategy that got sulfur dioxide under control and reduced acid rain. And California passed the nation's toughest automobile- emissions law last summer.

"There are a whole series of things that demonstrate that people want to act and want their government to act," says Fred Krupp, president of Environmental Defense. Krupp and others believe that we should probably accept that it's too late to prevent CO2 concentrations from climbing to 450 p.p.m. (or 70 p.p.m. higher than where they are now). From there, however, we should be able to stabilize them and start to dial them back down.

That goal should be attainable. Curbing global warming may be an order of magnitude harder than, say, eradicating smallpox or putting a man on the moon. But is it moral not to try? We did not so much march toward the environmental precipice as drunkenly reel there, snapping at the scientific scolds who told us we had a problem.

The scolds, however, knew what they were talking about. In a solar system crowded with sister worlds that either emerged stillborn like Mercury and Venus or died in infancy like Mars, we're finally coming to appreciate the knife-blade margins within which life can thrive. For more than a century we've been monkeying with those margins. It's long past time we set them right.