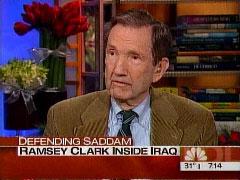 Katie Couric's interview with Ramsey Clark today started out way too soft. As Clark made completely bizarre claims about mistreatment of poor Saddam, the NBC graphic said only "Defending Saddam: Ramsey Clark Inside Iraq." (Unlike Bush-shoving headers like "Rhetoric vs. Reality," or on the Plame case, the evil-or-evil choice "Dirty Politics or Broken Laws?") Katie Couric began by questioning the dictator's lawyer about the latest news: Windows Media Player or Real Player

"Now to another big story going on in Iraq, the trial of Saddam Hussein and an unlikely member of his defense team former U.S. attorney general Ramsey Clark. He's here for his first interview since visiting his client in Baghdad last week. Mr. Clark good morning...Before we talk about your representation of Saddam Hussein do you think these elections may represent a turning point for Iraq?"

[Clark: "Well we can hope so but it's a very difficult time. There's a lot of violence going on. There's an inability for the public to really see the issues and really see the candidates and what they stand for. The United States' influence is enormous. I mean we plant stories in the newspapers favoring people. We provide funds for campaigns and we put people on TV who weren't known to the Iraqis before because they were in exile for 20 years. So it's not an ideal situation but we have to hope something is going to bring peace to Iraq."]

Now there's injustice for you, giving a platform to potential Iraqi leaders who would lay some claim to the Throne of Saddam. The impertinence! But question two was weirder, the one Mark Finkelstein noticed this morning about how Clark was a "distinguished" figure:

Couric: "Let me ask you about your representation of Saddam Hussein. You're the son of a former U.S. Supreme Court justice, attorney general, in, in, during the Johnson administration and many Americans probably scratch their heads and say very simply: Why? Why is this man with such a distinguished record, although, controversial, why is he representing someone who is known as the Butcher of Baghdad?"

[Clark: "Well that's very simple. First we're the ones that named him the Butcher of Baghdad and demonized him but..."

Couric: "You don't think he deserves to be demonized?"

[Clark: "I don't believe in demons, I believe in people. And I believe people do bad things. But if you believe in demons then you can do anything to a demon can't you? They're not human, they have no human rights. Let's get back to your issue. I was fortunate to serve eight years in the government in the Department of Justice under Presidents Kennedy and Johnson. It was a rare privilege and a rare time. It was the sixties and civil rights were booming. When I came out I thought I had an obligation and an opportunity to make a difference on human rights overseas and that's basically what I've been doing...

WAIT! Stop the tape! Hold the mouse. This is where there ought to be interruptions, if not loud bouts of laughter and spitting of coffee. Ramsey Clark's human rights career is not "distinguished," it's EX-tinguished. As Christopher Hitchens noted in Slate, he has "mutated into vagrant and floating defense counsel, offering himself to the génocideurs of Rwanda and to Slobodan Milosevic, and using up the spare time in apologetics for North Korea. He acts as front-man for the Workers World Party, an especially venomous little Communist sect, which originated in a defense of the Soviet invasion of Hungary in 1956." But let's go back to where Katie's allowing the uninterrupted harangue that a Saddam trial is a divisive, hate-creating disaster:

[Clark: "...This case is obviously of enormous importance. You just walk away from it? It involves the possibility of historic truth being found through a legal process if its fair. It's absolutely essential that the trial be fair. Can there be public justice? Can there be peace? This, this trial can be irreconcilably divisive in creating enormous new hatreds and passions. Everything depends upon it being fair. We're committed as a country, we say, to a fair trial. We ought to do everything we possibly can to see it's fair. What do we do? We release pictures of him with a guy's hands in his mouth, with Ahmed Chalabi a CIA asset sitting over him, towering over him three days after he's arrested. Pictures in his underwear. You haven't seen a decent picture of him. He's brought into court, he's been held in a cell down below with no change of clothes, no ability to comb his hair or anything. Trying to demonize him even during the trial."]

Can't we say by this point that Ramsey Clark, with his career of defending dictators who oppose America, should not allowed to use the pronoun "we," as if he actually was loyal in any way to his homeland? We should at least expect a journalist with a working moral sense to be able to ask Clark how he can compare these American outrages (no ability to comb hair, underwear pictures) with Saddam's mass graves and amputations and tortures. Couric doesn't ask what viewers at home probably asked: how can Saddam expect to have his "human rights" respected down to Doritos deliveries in the cell block when he never recognized the human rights of his own people? But Couric just moves on, as if these complaints are not a bit strange:

"When you raise these issues with U.S. authorities what, what is the reaction you get?"

[Clark: "Well you know when you raise it with them face to face they say, 'Yeah that's right, we try to do better next time,' or something like that but nothing happens. They're on a course, a rush to judgment."]

Couric then offered more of a platform for whining about prisoner's conditions:

"Since the trial began Saddam has exhibited some pretty strange behavior. He complained about having a notepad confiscated, having to walk up several flights of stairs because of a broken elevator. He's been quite belligerent. He boycotted his own trial saying he doesn't recognize the, the court because of so-called illegal U.S. occupiers. What do you make of his behavior? Do you think it's justified?"

[Clark: "Well let's go back to the pad. If you ever sit in a courtroom you see people with pads. You have to take notes. They want to remember what that witness said. They want to make notes of what they want to say. You take a pad in. He wanted to bring his Koran too. They wouldn't let him bring his Koran. Why? They wanted him to be upset when he came upstairs. He's entitled to have a Koran, he's entitled to have a pad. You take his legal papers away from him and what's he supposed to do? Just wing it? It was, it was a planned thing. He got upset the last day when he walked out. The court asked us to persuade him to come back in. I don't persuade my clients to do something. He's a human being. He makes his own judgments. I reason with him about the consequences. But imagine the court trying to tell the lawyers as if we represented the court rather than the client to bring him back in. But the reason he's upset he's being held in the, in the hole down there for three days. He hadn't been able to wash. He hadn't been able to take a bath, he hadn't been able to change his clothes, he hadn't been able to comb his hair and he thought they were doing that deliberately to make him look disheveled."]

Couric doesn't object that it could be argued that Saddam's look is instead too dapper, as his fashions have drawn rave reviews from Robin Givhan in the Washington Post. Couric went on to the dictator's emotional state, giving him another shot at denouncing cruel U.S. treatment:

"Meanwhile you, you met with him face-to-face last week. I understand it's the first time you've met with him since 2003. It was, you didn't have an opportunity to discuss legal strategy so what did you discuss with him and what is his demeanor at this point in time?"

[Clark: "Well I've met with him half a dozen times now since I got, you know I wrote President Bush and Rumsfeld and all of them saying, I need to see him immediately when he was arrested. Did the same thing with Tariq Aziz. Of course you don't want unfair advantage taken over these people. No one saw Saddam Hussein for a year. He's never seen his family. Never talked to his family. Never seen a friend, seen a friend he had before, talk, he's in total isolation. He doesn't know what's going on in the world. That's a form of very cruel harassment that disorients people. They don't know where they are, what's going on in the world."]

This is another occasion where you want to note that NBC is much hotter to document American infractions of human rights than Saddam's, and how the trial of Saddam is an opportunity to put Saddam's record back under the microscope. But Couric and NBC not only went soft on this. They never asked Clark about his domestic political entanglements, that he's a partisan calling to have President Bush impeached, that he founded the International Action Center that spawned International ANSWER, the sponsor of all the major Iraq protests. Katie could have asked: doesn't your defense of Saddam and your attacks on America suggest that the "peace" movement does not have America's national interest at heart? And doesn't it do damage to the American left at the polls for you to stoop to the position you're in, a hired gun for a mass murderer?

PS: You can also check out my blog on The Tougher Part  of Couric's chat with Clark.