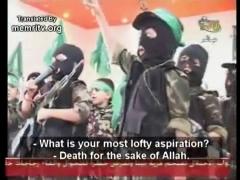 If graduation ceremonies from Israeli kindergartens included dressing children up in full military attire, with machine guns, ammo belts, and knives, and having the kids chant about killing Palestinians, do you think this would be newsworthy?

Well, on Thursday, Hamas’ Al-Aqsa TV aired a video of the graduation ceremony for the 29th class of the Islamic Association’s kindergarten in Gaza (video available here, h/t Hot Air).

Much as what was in the Palestinian school play video reported by NewsBusters last Saturday, this one showed children in full terrorist attire, while chanting the following:

Extraordinary, wouldn’t you agree? Yet, certainly not something the American press would be interested in sharing. Why?

Well, amongst all of the obvious bias and anti-Israel explanations one could come up with that are likely quite valid, consider that this would also discredit a very popular media meme concerning terrorism.

In particular, the press since just weeks after 9/11 loved to present terrorists as poor Muslim men without a job and without any hope. Such was supposedly an easy target for terrorist recruiters, correct?

These reports would include unemployment statistics in this region, in particular amongst men under the age of 25. The intent was to depict an entire population so downtrodden and without hope that terrorism and suicide bombing was almost an understandable eventuality.

In fact, these reports were intended to make Americans feel sorry for those living in such awful conditions that they actually felt they had no other option but to become a terrorist or suicide bomber.

However, if the reality is that children in this region are being bred as terrorists at a very early age as these videos clearly suggest, wouldn’t it destroy the media myth that this is largely about adult male despair over poverty-ridden conditions? And, wouldn’t it reduce American sympathy for their plight by making folks aware of what really is being sown in this region?

Or am I just being too cynical?