GMA’s Sawyer to McGreevey Wife: Doesn’t Anyone Feel Sorry for Him? 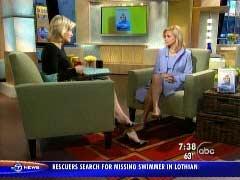 During Wednesday’s interview, Sawyer mentioned a subject that arose in custody hearings for the couple’s children. Apparently Jim McGreevey, who resigned after his homosexual affairs and hiring of grossly unqualified individuals became public, kept a rather large photograph of a naked man in his apartment where the children could see, much to the horror of his ex-wife. Sawyer prefaced this by calling the issue one where people "will come down, maybe, on two sides of it." She also wondered if homophobia could be a reason the governor’s wife reacted so negatively:

Diane Sawyer: "Well, I want to address something, the one thing we know about, which is you've been in hearings, in custody hearings. And as we said, there have been decisions made about many things. But one of them is quite provocative and really people, I think, will come down, maybe, on two sides of it. I don't know. There is a photograph, apparently, he has in the home where he lives with his partner now. And we're gonna show you as much as we can show you of it here. And it is a nude photograph of a male. How big is it?"

Sawyer: "Which means sort of life-size."

(Side note: Sawyer doesn’t seem to have a good grasp of spacial dimensions, does she?) It was at this point during the May 2 piece that the GMA co-host, taking the politically correct perspective, wondered if Mrs. McGreevey’s reaction could have something to do with homophobia, rather than an objection to a huge poster of a naked man in the home where her children are being raised:

Sawyer: "A nude photo. And you contested that photo. He has indicated that you're uncomfortable with - kind of a homophobia, in doing this. Does that have anything to do with it at all when you ask yourself seriously?"

Matos-McGreevey: "This has nothing to do with his sexuality. I mean, it's outrageous that he would think that that is - that, that's appropriate for a child. I haven't found any parent who thinks it's - it's appropriate. And he compared it to, you know, a piece of art that you would find at the Met. I don't know anybody who thinks that's a piece of art. You know, it's not a Michelangelo. It's not a bronze statue. It's a picture of a nude male, something you'd find in 'Playboy’ or 'Playgirl.’"

On Thursday’s edition of GMA, Sawyer hosted a roundtable discussion with Mrs. McGreevey and other individuals who had a gay spouse. The segment, which aired on May 3 at 8:11am, featured talk of how a husband or wife could miss the signs. But, later in the piece, the ABC host questioned, "But, I wondered, since it isn’t easy to be gay in America, doesn’t anyone take the governor’s side, feel his pain?"

Mrs. McGreevey responded by noting how selfish it was for the gay ex-governor to marry her and proceed to have children. So, Sawyer tried again. She concluded the interview by asking  the assembled group, "Anybody here feel sympathy for him?" There didn't appear to be much sympathy for former governor.