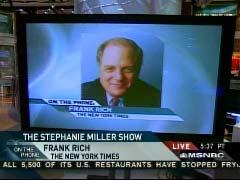 On Tuesday, well known Bush hater Frank Rich appeared on liberal Stephanie Miller radio show. (Miller is being given a test run this week on MSNBC in the departed Don Imus’ spot.) Proving that there’s nothing the New York Times columnist can’t use to slam the President, Rich attacked Bush for not telling jokes at the White House Correspondents Dinner and members of the media for not rebelling against it:

Frank Rich: "The, uh, the general play where Bush stand up and says he is not going to do his usual comedy routine because of Virginia Tech, that’s outrageous and the press sits there and applauds."

Ms. Miller chimed in by reminding her audience of a previous dinner where President Bush "looked" under desks and tables for WMDs. Now, this is a moment that made even many conservatives cringe. But how, exactly, would cracking jokes a week after the Virginia Tech massacre, make up for it? Wouldn’t Mr. Rich have criticized Bush for doing a comedy routine so soon after a tragedy? Mr. Rich continued:

Rich: "Right. Okay last year when Stephen Colbert was there to do, as American troops dying in Iraq, to yuck it up with a Bush impersonator, but Virginia Tech, which is, you know, deaths that he cannot be held responsible for he is going to milk for the second time in a week for PR purposes and the press, sits there, you know, as dress extras in a movie scene."

Earlier in the segment, which aired at 8:34am on May 1, the New York Times columnist touted the high-mindeness of his own paper for deciding to begin skipping the correspondence dinner. Incredibly, he also slammed other media outlets for taking part, alleging that this made them somehow soft on President Bush:

Rich: "The New York Times last week decided to pull out of all events like this and, you know, not a moment too soon, certainly. And interesting to see if others follow, follow suit. But Washington is a, is a club. And it is fine. I mean, I grew up there, but it can't be a club to the point where the news is not properly covered. And we have seen a lot of it and somehow to me, this is sort of a metaphor for the whole situation."

Mr. Rich recently wrote a column on Don Imus that, albeit tepidly, tried to spread the blame around for the radio host's firing. So, it's a little odd for the columnist to slam Presiden Bush's alleged insensitivity.