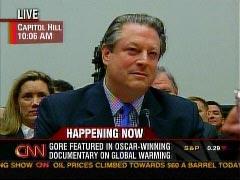 A rather inconvenient truth occurred in late March that went totally unreported by the global warming alarmists in the media.

On the very day that soon-to-be-Dr. Al Gore was informing Congress of the planet’s imminent doom, the Anchorage Daily News reported that this winter has been so cold there that fire hydrants are exploding.

I bet your favorite drive-by media outlet didn’t share any of this as they were falling all over themselves with sycophantic praise for the global warming alarmist-in-chief (h/t NB member dscott, emphasis added throughout):

A cold spell last November, plus a too-cold March, drove frost deeper than usual in Anchorage this winter, down to about nine feet, which is just one foot above the official burial depth of city water pipes.

Pipes buried 10 feet underground are freezing all around the city, according to the Anchorage Water and Wastewater Utility.

But even as spring slunk into town, fire hydrants popped out of the ground Monday and Tuesday nights and sent water flowing into buildings. And the spurs that lead to houses -- which property owners are responsible for -- are freezing around the city.

"Everything in town is freezing up faster than we can keep it thawed out," said Larry Libby, owner of Libby Thawing Service, who was out trying to get a main line flowing on Fort Richardson on Tuesday.

November's weather lies at the heart of the problems this month. November is generally one of Anchorage's snowiest months, said National Weather Service meteorologist-in-charge Bob Hopkins. The snow insulates the ground. But in fall 2006, there was virtually none until December.

On top of that, November temperatures averaged a low of 5 and a high of 18, versus the normal average high of 28, according to National Weather Service data. The frost deepened and the stage was set for frozen pipes in the spring.

This year's freeze isn't the worst ever -- that was 10 years ago, when the frost reached about 13 1/2 feet deep, Libby said.

Hmmm. So the worst-ever freeze was ten years ago? I thought the globe has been warming for the past century?

Facts certainly are a stupid thing, aren’t they? Maybe folks like Gore and his not so merry band of alarmists should try them sometime.

Of course, that wouldn't fit with the agenda being driven, would it? After all, if we want Americans to believe the globe is warming, we certainly wouldn't want to report the parts of the planet that are actually colder than usual, would we?

Conversely, if this were the mid-70s, and the fear-mongering was an imminent ice age, do you think exploding fire hydrants in Alaska would have been headline news?

America's Media Motto: We Only Report What Fits Our Agenda!