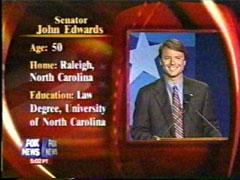 It’s probably not that surprising that some on the far Left were complaining that the Fox News Channel was going to host a debate between the Democratic presidential candidates in Nevada later this year. They were probably completely unaware that Fox News co-hosted (with the liberal Congressional Black Caucus Institute) two Democratic debates during the last presidential campaign.

What is surprising is that former Democratic Senator John Edwards, who smilingly participated in both of the Fox debates in 2003 (picture at left), decided that he could not participate in a debate hosted by Fox. “I said, ‘Why are we doing Fox?’ I said, ‘No, tell them no,’” Edwards told the Washington Post’s Dan Balz.

The idea that Fox runs biased debates is a bum rap. Four years ago, Brit Hume moderated the first debate on September 9, with questions posed by NPR’s Juan Williams, TheBeehive.org’s Farai Chideya, and BET’s Ed Gordon, three liberals The second debate on October 26 was hosted by Gwen Ifill (who later served as moderator of the vice presidential debate between Edwards and Dick Cheney), with questions asked by FNC reporter Carl Cameron and WJBK-TV anchor Huel Perkins.

There’s no record that any of the 2003 debate participants, who included very liberal candidates such as Ohio Congressman Dennis Kucinich and the Reverend Al Sharpton, had any complaints of bias.

It is not exactly clear why Edwards, who was an enthusiastic participant in Fox’s debates in 2003, suddenly found it impossible to participate this year, but the Post noted that Edwards is running a much more stridently left-wing campaign this year than he did four years ago.

After Edwards backed out, the Nevada Democratic Party seized on the thin reed of a comment by Fox News Chairman Roger Ailes — a joke that basically mocked President Bush for supposedly being unable to distinguish Barack Obama from Osama bin Laden — to cancel the debate entirely.

The letter co-signed by Senate Majority Leader Harry Reid, the top Democrat in Nevada, oddly suggested that to let Democratic candidates debate on Fox’s airwave was to endorse Ailes joke, which they misinterpreted as a slight against Senator Obama (who said for his part he wasn’t bothered by the joke):

“Comments made last night by Fox News President Roger Ailes in reference to one of our presidential candidates went too far. We cannot, as good Democrats, put our party in a position to defend such comments. In light of his comments, we have concluded that it is not possible to hold a Presidential debate that will focus on our candidates and are therefore canceling our August debate. We take no pleasure in this, but it is the only course of action.”

Edwards and Reid, of course, are ratifying the quite illiberal campaign by left-wing activists to declare Fox “a right-wing misinformation network,” not a legitimate source of news.

Writing Saturday on the HuffingtonPost.com, Melinda Henneberger documented the high-fives lefties were giving each other after the debate’s cancellation:

Robert Greenwald, director of the movie Outfoxed, called the move a “victory for truth and journalism.” Some 280,000 people have viewed Greenwald’s new YouTube film "Fox Attacks: Obama" — located with the petition at www.FoxAttacks.com. "By standing up to Fox's right-wing smears," Greenwald said, "the patriotic grassroots, Netroots, Senator Reid, Senator Edwards, and the Nevada Democrats have all worked together to protect one of the most important elements of a free society - the press."

And Eli Pariser, Executive Director of MoveOn.org Civic Action, said he hoped the decision would "set a precedent within the party that Fox should be treated as a right-wing misinformation network, not legitimized as a neutral source of news."

Journalists who care about their profession should be appalled by such reasoning and repudiate the campaign to silence their brethren at Fox News, but the debate cancellation has so far been given relatively slight coverage from the other networks. And some of those journalists who work for other news organizations need to ask Senators Edwards and Reid whether or not they share the far Left’s belief that the Fox News Channel is nothing but a GOP mouthpiece.

It's impossible to imagine that the establishment media would be so silent if conservatives or Republicans were working to ostracize a liberal media outlet.

CNN, by the way, will host a Democatic debate in Nevada in November, so Democrats are choosing to bypass the top-rated cable news outlet in favor of one with less than half the audience.