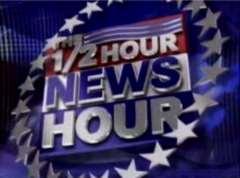 This Sunday at 10pm Eastern, Fox News Channel is going to show a pilot episode of a news satire show it's commissioned from "24" executive producer Joel Surnow.

Here at NB and MRC, we often rightly complain at the media's leftward slant. This slant exists largely because the news and entertainment media shun and blacklist people with known conservative and libertarian politics, however, it's also a question of the right's interest in media.

If you're sick of every comedy show being run by left-wingers like Jon Stewart, Bill Maher, and David Letterman, join me in watching the "Half-Hour News Hour" this Sunday and tell everyone you know who might like it to tune in as well.

For a sample of the show and its format, click on over to this YouTube excerpt. There's also another promo where the show's producers discuss who might be offended at it. Click past the fold to watch the first spot right from this entry.