The Begala Media: WashPost Devotes Story to Bush Leaving The 'Ic' Off Democrat 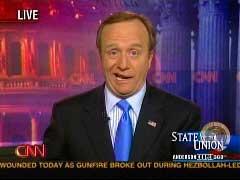 Paul Begala lamented on CNN Tuesday night that President Bush had committed a grave sin by calling his new opposition the "Democrat majority" instead of the "Democratic majority." Liberal reporters in the last few years have called Bush a dictator and compared Vice President Cheney to Darth Vader. But to call someone a "Democrat" is worse? Thursday's Washington Post carried an entire article championing Begala's complaint in the Style section Thursday titled "President's Sin of Omission: Dropped Syllable In Speech Riles Democrats."

It was bad enough for Post columnist Ruth Marcus to devote an entire column of wailing and mourning to this slight in November. Before dutifully recycling Begala's pleas on CNN, reporter Libby Copeland noted that this has long been a part of "Republican warfare" on those people who represent the public interest:

Bush does this a lot, and while it's hard to say if the omission was intentional in this instance, it is a semantic tactic that's been part of Republican warfare for decades. It's a little thing, a means of needling the opposition by purposefully mispronouncing its name, and of suggesting that the party on the left is not truly small-"d" democratic. The president's pronunciation was all the more striking because it was apparently not what Bush was supposed to say. The prepared speech that the White House distributed beforehand retained that precious "-ic."

The case of the missing suffix provoked an oh-no-he-di'int reaction from some Democrats. The bloggers caught it, of course. (Bloggers catch that sort of thing.) "Code word," wrote one. "Calculated insult," wrote another.

"We all noticed," says Markos Moulitsas Zúniga, founder of the liberal blogging site DailyKos.com, who replayed the president's opening words on his TiVo to make sure he'd heard what he thought he heard. "He just clearly couldn't help himself."

"Like nails on a chalkboard," says John Podesta, chief of staff in the Clinton White House, and president of the Center for American Progress.

After giving GOP consultant Mike Murphy's no-big-deal reply to Begala on CNN a tiny recounting, Copeland wondered:  "But for those who see a big symbol in two little letters, the question becomes: Is a man who can't say '-ic' capable of being bipartisan?"

At CBS's Public Eye blog, Hillary Profita noticed that the Wall Street Journal and the Atlanta Journal-Constitution were also among the Ic-pickers.