Readers are advised to remove all food, fluids, and flammables from proximity to their computers before proceeding. You've been warned.

NBC News justice correspondent Pete Williams on this weekend's syndicated Chris Matthews Show actually said that when it comes to nominating judges, "A Democratic president is more likely to appoint somebody near the middle who is less ideological" (video follows with transcript and commentary):

NPR's Totenberg: Kagan, Sotomayor 'Not Nearly as Liberal' as Predecessors

NPR's Nina Totenberg strangely cast doubt on the liberal credentials of Supreme Court Justices Elena Kagan and Sonia Sotomayor on Saturday's Early Show on CBS, claiming that "they're not nearly as liberal as justices were...thirty years ago." Totenberg also hinted that the other members of the Court were right-wing radicals: "Compared to the much more conservative members of the Court, they are liberal."

Anchor Russ Mitchell brought on the journalist for her take of the most recent term of the Supreme Court. Near the end of the interview, Mitchell noted how "this was the first full term for President Obama's two appointees, Elena Kagan and Sonia Sotomayor" and asked, "What do you think? Did we see a shift in the Court's philosophy this year at all?"

Bozell Column: Losing Your Head at the Supreme Court

On Election Day, the Supreme Court heard arguments in the case Schwarzenegger vs. Entertainment Merchants Association. The irony of this case name was obvious: the celebrated violent-action-hero governor of California had signed a bill into law in 2005 forbidding the sale of ultraviolent video games to minors, a law that lower federal courts prevented from ever going into effect.

Why should the Supremes care about this? After all, a year before that, Gov. Schwarzenegger signed a law making it illegal for anyone under 14 years old to tan indoors under any circumstances. (Children from 14 to 18 can tan – with parental consent.) The fine for salon operators for each violation is as much as $2,500 per day. Somehow this did not become a cause celebre, and was not fought all the way to the Supreme Court. Indeed, 32 states are inhibiting the freedom of minors to tan, and no one cares.

But interfere with their right to fry their minds and there’s hell to pay. Video-game manufacturers don’t want politicians tampering with their sales to minors, so here comes the march of the First Amendment fundamentalists, who argue that the principle of freedom of speech covers the enthusiastic distribution and sale of every kind of child-corrupting media horror. For them there must be no helpful hurdle or brake for children to go around their parents and grab what Justice Samuel Alito called “the most violent, sadistic, graphic video game that can be developed.”

One wonders how Ed Whelan of the Ethics and Public Policy Center managed to get a hold of a private letter sent to President Obama by Harvard law professor Laurence Tribe advising him against nominating Sonia Sotomayor to the Supreme Court, but be that as it may, its contents are quite interesting and show just how nakedly political Tribe’s view of a justice really is and also how little he thinks of Sotomayor.

In the May 2009 letter (PDF link here), Tribe advises Obama to refrain from choosing Sotomayor because “she’s not nearly as smart as she seems to think she is” and also that she is a “bully” who would would be unable to try to persuade frequent SCOTUS swing vote Anthony Kennedy to a “pragmatically progressive direction,” something that Tribe believes former justice David Souter had managed to do on occasion.

Will Kagan Do A Sotomayor?

By Kyle Drennen | June 28, 2010 11:13 AM EDT
When President Bush nominated John Roberts and Samuel Alito to the Supreme Court in 2005, the media did not hesitate to describe both men as "very conservative," but when President Obama nominated Sonia Sotomayor in 2009 and Elena Kagan this year many in the press couldn't seem to identify any liberal ideology. The Media Research Center has produced a video compilation of examples to further demonstrate the obvious double standard. [Audio available here]

During ABC's live special coverage of Roberts's nomination on July 19, 2005, then This Week host and former Democratic operative George Stephanopoulos declared: "This is a very conservative man with a strong paper trail that proves it." NPR's Nina Totenberg could hardly contain her urge to label, using the word "conservative" several times during a July 23 appearance on Inside Washington: "John Roberts is a really conservative guy...he's a conservative Catholic....[President Bush] has given conservatives a hardline conservative."

The same labeling followed Alito's nomination months later. CBS's Bob Schieffer opened the October 31 Evening News by proclaiming: “Conservatives wanted a conservative on the Supreme Court, and said the President ought to risk a fight in the Senate to get one. Their wishes have been fulfilled.” Later that evening, on a special 7PM ET hour edition of CNN's The Situation Room, anchor Wolf Blitzer described: "...there is a new nomination and new controversy. A battle shapes up as the president picks a staunch conservative who could help reshape the U.S. Supreme Court."

But the early stories on President Obama’s nomination of Elena Kagan routinely avoided describing her as a liberal. In six evening news stories and eight morning news segments since her official press conference on Monday morning, the broadcast networks have employed only one liberal label, on CBS. ABC and NBC offered none. 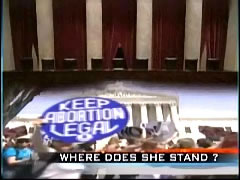 NBC and ABC on Thursday night framed stories around concerns of “abortion rights” advocates who want proof Supreme Court nominee Sonia Sotomayor is on their side, but both cloaked their pieces around the proposition “both sides” of the debate are equally worried.

With “Where Does She Stand?” as the on-screen heading, as if there is genuine belief Obama would have selected the judge without knowing she'd uphold Roe v Wade, NBC anchor Lester Holt set up a story through the prism of pro-abortion activists as he announced that White House “spokesman Robert Gibbs says the President did not specifically ask her about the right to privacy, a key issue in the abortion debate.” Reporter Pete Williams proceeded to declare that Sotomayor's stand on abortion is “a mystery” as “both sides on the abortion issue agree...they're eager to know exactly what Sonia Sotomayor thinks about abortion and the constitution.” Viewers then heard only from one side, an “abortion rights advocate.” 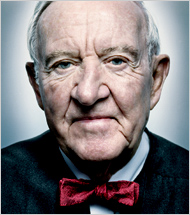 On the front of Sunday's Washington Post, Supreme Court reporter Robert Barnes unfurled the first liberal spin line of the battle over a new Supreme Court justice: that there's no way whoever Obama nominates will be more liberal than retiring John Paul Stevens. Barnes said "almost certainly" the court will be more conservative after Obama's second nominee is confirmed.

Can anyone imagine the media buying that spin for a second after, say, Chief Justice Rehnquist passed away? Oh, Bush can't possibly make the court more conservative. "Almost certainly," the court will be more liberal now.

Barnes completely accepted Justice Stevens laying down a marker for his half of the court, and made it the newspaper's own front-page spin:

WaPo Reviews Abortion Battle in 2009 as All Tiller and Stupak -- And No Sotomayor?

The Washington Post took up the struggles of the abortion lobby in the Sunday newspaper. Reporter Peter Slevin's story was headlined "Abortion rights activists brace for another year of challenges." 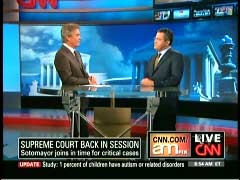 CNN legal analyst Jeffrey Toobin again turned to his usual labeling of the ideological split on the Supreme Court on Monday’s American Morning. Toobin labeled Justices Scalia, Thomas, Alito and Roberts “very conservative” three times, as opposed to the mere “liberal” justices on the Court. The analyst also bizarrely claimed that the “liberal side” of the body is “basically outnumbered.”

Toobin appeared during two segments at the ends of the 6 am and 8 am Eastern hours of the CNN program. Anchor John Roberts (who has the same name as the chief justice) interviewed the legal analyst both times, and he first asked about the influence of new Justice Sonia Sotomayor on the Court as it starts a new session. Toobin used his slanted labeling from right out of the gate: “You know, Justice Byron White was famous for saying, ‘When you change one member of the court, you don’t just change one member, you change the whole court’...This may be, though, a rare exception to that because her politics seem very similar to David Souter’s, so that the divisions on the court- four very conservative justices, four liberal justices- Anthony Kennedy in the middle- is probably not going to change that much.”

WOR radio's Steve Malzberg likely had no idea the hornets nest he was walking into Monday when he decided to discuss race relations with Fox News's Geraldo Rivera.

Regardless of the tension on display or the uncomfortable conclusion, what transpired perfectly demonstrated how far we as a nation are from ending racism.

At first, Rivera seemed rather reasonable when he called CNN's Rick Sanchez a jerk for his comment a few months ago that Hispanics working for Fox News are all sellouts.

But when the discussion turned to the confirmation of Justice Sonia Sotomayor to the Supreme Court, and whether her comments concerning a wise Latina woman making better decisions than a white man could be perceived as racist and sexist, Rivera got quite defensive and eventually hung up on his host (15-minute audio available here, rough transcript below the fold):