One favorite tactic of our “objective” media during the Trump impeachment is to find a clip of  the president’s legal experts expressing an opinion during the Bill Clinton impeachment in 1998 and 1999 and then showing a contrast with the present day. But this is just as easily demonstrated with the press. In both impeachments, the press flipped to whichever talking points were in use by the Democrats.

Most folks dream of a white Christmas. No one, not even Elvis fans, want a blue one. But the Washington Post's Brian Palmer is fixated on how you can have a green one. Spoiler alert: He doesn't think trekking out to the local tree farm to fell your own tree is the way to go.

"Do you deserve a lump of carbon under your Christmas tree?" Palmer asked in his December 11 EcoLogic column. Apparently, the issue of tree farms during this holiday season is a point of contention within the environmentalist community.  Yes, the greenies can't give it a rest, not even for the holiday season.

Imagine if it were discovered that free-market think tanks were caught vetting scripts of Fox News programs, intervening to prevent free-market sceptics from receiving air time, and consulted with the network about how it should alter its programing in a free-market direction. The howls of outrage would be loud, long and unrelenting from other news networks, the wire services, and leading U.S. newspapers.

What I have just described, and more, characterizes a decade-long relationship between the British Broadcasting Corporation and UK-based climate scientists at the University of East Anglia (UEA) -- except that the BBC is government-funded and disproportionately controls the flow of broadcast news in the UK. What the UK Daily Mail has revealed today as part of its ongoing review of the second set of Climategate emails released before Thanksgiving has caused Benny Peiser of the Global Warming Policy Foundation to write that the BBC is "in cahoots with Climategate scientists." What follows are excerpts from the David Rose's Daily Mail story (bolds are mine):

Almost exactly two years since damning email messages were released from Great Britain's University of East Anglia showing a pattern of deception and collusion between scientists involved in spreading the global warming myth, a new batch of such correspondence has emerged that seems destined to get as little press coverage as the original ClimateGate scandal did in November 2009.

Krugman: No 'Scientific Impropriety' in ClimateGate - 'Hide the Decline' an 'Effective Graphical Presentation'

For many years, conservatives have been claiming that Paul Krugman makes up economic data to support his political conclusions.

Proving the point, the New York Times columnist said Monday, "Nothing in the [ClimateGate email] correspondence suggested any kind of scientific impropriety," and in the truly damning message from Phil Jones, the former head of Britain's Climatic Research Unit, "it’s clear that he’s talking about making an effective graphical presentation, not about suppressing evidence":

USA Today on Thursday devoted a front page story to defending one of the key scientists involved in November's ClimateGate scandal.

The main article also dishonestly ignored how Mann is being investigated by his own university concerning his involvement in the scandal, and actually NEVER even mentioned the scientist's infamous "Hockey Stick" graph that has been widely discredited by climatologists and meteorologists around the world.

Instead of a fair and balanced treatment of Mann and issues related to his view of anthropogenic global warming, readers were unfortunately presented with a grossly one-sided and disingenuous report evident in the very first paragraphs: 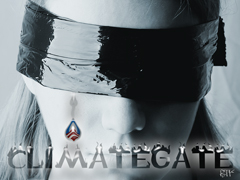 The absolutely stunning global warming revelations this weekend by the man in the middle of the ClimateGate scandal have gone almost completely ignored by America's press.

As NewsBusters reported Saturday, Phil Jones, the head of the British Climatic Research Unit at the heart of ClimateGate, told the BBC: the recent warming trend that began in 1975 is not at all different than two other planetary warming phases since 1850; there has been no statistically significant warming since 1995, and; it is possible the Medieval Warm Period was indeed a global phenomenon thereby making the temperatures seen in the latter part of the 20th century by no means unprecedented.

Jones also admitted that he and his fellow scientists manipulated figures to hide a decline in crucial tree-ring data thereby questioning the validity of the entire global warming theory.

Despite the seriousness of these revelations, much as what happened when the ClimateGate scandal first broke, with the exception of Fox News -- and a lone report by CNN -- America's media have almost totally boycotted this amazing story:

The British scientist in the middle of November's ClimateGate scandal says that contrary to what Al Gore and many in the media claim, the debate concerning manmade global warming is not over.

"There is still much that needs to be undertaken to reduce uncertainties, not just for the future, but for the instrumental (and especially the palaeoclimatic) past as well," Phil Jones, the former head of Britain's Climatic Research Unit told the BBC.

In a lengthy Q&A published at BBC.com Saturday, Jones also said: the recent warming trend that began in 1975 is not at all different than two other planetary warming phases since 1850; there has been no statistically significant warming since 1995, and; it is possible the Medieval Warm Period was indeed a global phenomenon thereby making the temperatures seen in the latter part of the 20th century by no means unprecedented.

America's media might not think the growing ClimateGate scandal is important, but Britain's Met Office believes it's serious enough to re-examine 160 years of temperature data:

The new analysis of the data will take three years, meaning that the Met Office will not be able to state with absolute confidence the extent of the warming trend until the end of 2012.

For those unfamiliar, the Met Office is England's national weather service.

Maybe this revelation will convince our global warming-obsessed press that information in the e-mail messages obtained from the University of East Anglia's Climatic Research Unit is actually newsworthy.

As reported by the London Times Saturday (h/t Ed Morrissey):

It's been nearly two weeks since a scandal shook many people's faith in the scientists behind global warming alarmism. The scandal forced the University of East Anglia (UK) to divulge that it threw away raw temperature data and prompted the temporary resignation of Phil Jones of the university's Climate Research Unit.

Despite that resignation and calls by a U.S. senator to investigate the matter, ABC, CBS and NBC morning and evening news programming has remained silent - not mentioning a word about the scandal since it broke on Nov. 20, even as world leaders including President Barack Obama prepare to meet in Copenhagen, Denmark next week to promote a pact to reduce greenhouse gases.

Other news outlets, including The New York Times, Washington Post, CNN and Associated Press have deemed ClimateGate worthy of reporting, but the networks were too busy reporting on celebrity car accidents and the killer whale that ate a great white shark. Instead of airing a broadcast news segment that might inform the public about the science scandal, both ABC and CBS relegated the story to their Web sites. There was one mention of the scandal on ABC's Sunday talk show: "This Week with George Stephanopoulos."

ABC, CBS and NBC’s collective silence on “ClimateGate” has reached ridiculous levels as the broadcast networks continued to ignore the great and growing scandal. The bias by omission has now become scandalous.

If you needed any more assurance the growing ClimateGate scandal is far more significant than America's media has been portraying, you got it Tuesday night from Comedy Central's Jon Stewart.

Somewhat surprisingly, "The Daily Show" host in his opening sketch tore apart the scientists involved in sending the obtained e-mail messages for showing "a clear effort to raise fears about global warming, and hide evidence against it."

Stewart even mocked the man responsible for spreading more fear on this subject than anyone on the planet: