Nicholas Fondacaro
Nearly two and a half years after accepting a plea deal because he was entrapped by anti-Trump FBI investigators, former General Michael Flynn saw light at the end of the tunnel Thursday. After the case was reviewed by the Department of Justice, Attorney General William Barr order the case be dropped citing the fact Flynn had not lied about anything material or central to the Russia investigation… Nicholas Fondacaro
After spending days decrying Attorney General William Barr as a stooge for President Trump after he overruled overzealous federal prosecutors seeking a maximum of nine years in the sentencing of Roger Stone, Federal Judge Amy Berman Jackson handed down a sentence in line with the recommendation Barr amended. Despite this fact, the liberal broadcast networks (ABC, CBS, and NBC) made it seem as… Nicholas Fondacaro
The Department of Justice Inspector General’s report clearly spelled out gross abuses by the FBI when applying to spy on members of the Trump campaign. Despite those facts, ABC’s World News Tonight and CBS Evening News were clutching their pearls Tuesday while reporting on how President Trump and Attorney General William Barr were slamming the law enforcement organization for lying… Nicholas Fondacaro
With the release of the Inspector General’s report exposing FBI misconduct in pursuing the Trump campaign under the suspicion of Russian influence, the liberal media were more interested in bashing President Trump than criticizing the abuses of the FBI. CNN’s Anderson Cooper kicked off his show on Monday doing just that, suggesting President Trump was lying and “gaslighting.… Nicholas Fondacaro
The Justice Department’s Inspector General report examining the origins of the Russia investigation was released on Monday. And in spite of “serious management failures” and “no satisfactory explanation” as to why certain actions were taken, the IG suggested there was no anti-Trump bias. Of course, certain members of the liberal media pounced such as ABC chief… Nicholas Fondacaro
In the wake of the “disaster” that was the Democratic-led House hearings with Special Counsel Robert Mueller on Wednesday, some in the liberal media were honest about how it blew up in their faces. Yet, during the evening newscasts of ABC, CBS, and NBC, the liberal media were desperately holding onto the dream that Mueller would help Democrats impeach President Trump. But there were a… 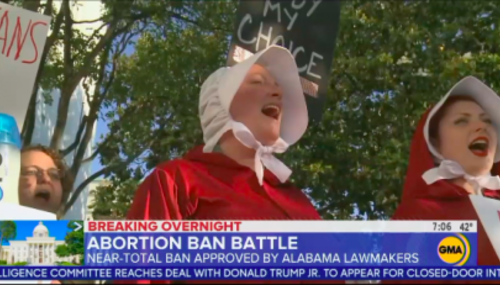 Geoffrey Dickens
Network anchors and reporters are currently freaking out over Georgia, Alabama and Missouri passing laws designed to protect the rights of the unborn, having already devoted almost an hour (59 minutes, 38 seconds) of coverage (May 7-16) to the these new laws. But when New York passed a radical law legalizing late term abortions back in January the networks didn’t care at all - spending zero… Nicholas Fondacaro
NewsBusters has kept track of the liberal media’s lack of or minimal coverage of many of the scandals plaguing Democratic politicians, but ABC and NBC shockingly reported on the mayor of Baltimore getting raided by the FBI and the IRS on Thursday. Meanwhile, CBS Evening News omitted the story entirely from its broadcast. Kyle Drennen
During live coverage on NBC News Thursday morning, Justice Department correspondent Pete Williams made a point of saying that Attorney General William Barr’s four-page letter outlining the conclusions of the Mueller Report “tracks very closely” with the findings in the report itself.

Kyle Drennen
During her hostile interview with White House Press Secretary Sarah Huckabee Sanders on Monday’s Today show, co-host Savannah Guthrie worried if Attorney General William Barr was “on the level” when he made the decision not to pursue obstruction of justice charges against President Trump after Special Counsel Robert Mueller found no conclusive evidence to warrant such charges.… Nicholas Fondacaro
On Wednesday, Americans learned that, during the Obama years, U.S. intelligence officer Monica Witt was recruited to be a spy by Iran and fed them sensitive information, including the identities of intelligence sources. Despite Iran’s clear effort to harm America, NBC Nightly News ran a report fretting a U.S.-led conference aimed at further squeezing the radical regime. And here’s the… Brad Wilmouth
Tuesday's NBC Nightly News ran a full report highlighting calls by liberals to legally require background checks for private gun sales. But, in citing the case of a mass shooting from 2012 as alleged evidence of how a backround check might have prevented the attack, correspondent Pete Williams failed to address whether the perpetrator, Radcliffe Haughton, could have been deported… Brad Wilmouth
Between Tuesday afternoon and Wednesday morning, as a number of MSNBC shows pounced on an internal report by the Department of Homeland Security finding that the agency was not prepared for the extra load when it began implementing the "zero tolerance" policy toward illegal border crossings, there were several MSNBC personalities who declared that the Trump administration…