After getting laughed at by Monica Crowley for making a foolish comment about the disparate ways Barack Obama and Ronald Reagan handled Libya during their respective presidencies, Newsweek's Eleanor Clift doubled down on this weekend's "McLaughlin Group" by saying a Tea Party candidate can't win a national election.

Crowley was once again up to the challenge and correctly pointed out, "If the government keeps spending like this, that Tea Party movement is only going to accelerate" (video follows with transcript and commentary):

Eleanor Clift on this weekend's "McLaughlin Group" made a truly absurd comment about the disparate ways Barack Obama and Ronald Reagan handled Libya during their respective presidencies that left Monica Crowley in stitches.

After Clift mocked Reagan by saying, "You don’t need leadership that goes into a Muslim country all alone," Monica laughed loudly before replying, "American presidential leadership, Eleanor, never goes out of style" (video follows with transcript and commentary):

Eleanor Clift and Bill Press: 'U.S. Auto Industry Stronger Than It Ever Was'

Does a sycophantic devotion to the President make liberal media members lose all connection to reality?

Before you answer, consider that on Friday, Newsweek's Eleanor Clift and liberal radio host Bill Press actually said on PBS's "McLaughlin Group" the U.S. auto industry is stronger than it ever was (video follows with transcript and commentary):

Eleanor Clift Asks McLaughlin Group "Since When Does Scott Walker Represent 'The People'?"

Newsweek's Eleanor Clift on Friday amazingly asked, "Since when does Scott Walker represent 'the people'?"

Such happened during a heated discussion on PBS's "The McLaughlin Group" about the goings-on in Wisconsin (video follows with transcript and commentary):

For the second week in a row, Newsweek's Eleanor Clift found herself in a hostile crowd on PBS's "McLaughlin Group."

During a lengthy segment about the crisis in Eqypt, after Clift claimed the protesters were secular, the entire panel almost pounced on her with Mort Zuckerman saying several times, "That's nonsense" (video follows with transcript and commentary):

As NewsBusters previously reported, Sam Donaldson on Sunday's "This Week" actually thanked the anti-American television network Al Jazeera for what they do in the Middle East.

On Tuesday, Fox News's Bill O'Reilly invited Alan Colmes and Monica Crowley on his program to discuss the matter, and by the end of the segment, O'Reilly was practically screaming at Sean Hannity's former partner (video follows with commentary):

After the debacle that was the high-profile Oprah-and-Michelle-Obama politicking in Copenhagen to get the Summer Olympics in Chicago in 2016, it might not be surprising that the networks weren't heavily tracking the U.S. bid to attract the World Cup soccer tournament for 2022. (You could argue that U.S. sports fans are much more indifferent to the World Cup than to the Olympics.) The American delegation that traveled to Switzerland included soccer stars, and former president Bill Clinton, and an Obama cabinet member. The Secretary of Commerce, perhaps? No, Attorney General Eric Holder.

When the tournament was awarded oddly to Qatar on December 2 (promising air-conditioned stadiums since summer temps are in the 120s, not to mention how global warming might ruin the planet by 2022), there was no mention on ABC,CBS, or NBC -- or The Washington Post, or the Los Angeles Times, or USA Today, for that matter. But that night, Monica Crowley and Sean Hannity did take it apart on Fox News:

Here's a twist on the WikiLeaks document dump only a liberal media member could come up with: it shows the Obama administration is doing a good job.

Bill Press this weekend said Barack Obama has created more jobs in the past 20 months than George W. Bush did in his entire eight years in office.

As readers will see from the actual data compiled by the Bureau of Labor Statistics, Press's comments made on the "McLaughlin Group" were so false it's laughable (video follows with transcript and commentary):

Monica Crowley Smacks Down Eleanor Clift Over GOP Being 'Extreme'

Conservative commentator Monica Crowley and Newsweek's Eleanor Clift got into another heated debate on PBS's "McLaughlin Group" this weekend.

This time, the perilously liberal Clift claimed policy proposals set forth in the Republican "Pledge to America" were "extreme."

"They should have just stood aside and let [the upcoming elections] be a referendum on the Democrats," claimed Clift.

"This election is a referendum on progressivism," countered Crowley. "What Eleanor refers to as extreme politics, as extreme policies in the Pledge, we are talking about cutting taxes, limiting government, cutting the deficit."

This angered Clift who screeched, "Don't misquote me" (video follows with transcript and commentary): 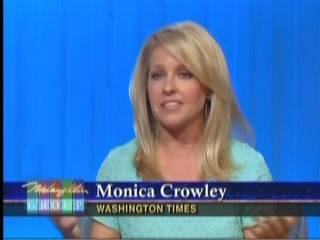 In the second segment of "The McLaughlin Group," the host addressed July's controversial resolution by the NAACP condemning so-called racist elements within the Tea Party.

Liberals Clift and Clarence Page of the Chicago Tribune predictably supported the NAACP while bashing the conservative organization.

Crowley with the support of Pat Buchanan defended the Tea Party while calling the NAACP irrelevant.

With McLaughlin surprisingly taking Crowley and Buchanan's side, sparks flew in an oftentimes heated discussion (video follows with partial transcript and commentary):

Newsweek's Eleanor Clift, on this weekend's syndicated The McLaughlin Group, slighted conservative pro-life women everywhere when she applied California Republican Senate candidate Carly Fiorina's "so yesterday" description of Democratic Senator Barbara Boxer's hairstyle to women who hold anti-abortion views in the Republican Party. Clift, in a segment about the primary victories of both Fiorina and GOP gubernatorial candidate Meg Whitman began actually crediting Sarah Palin as "Saint Sarah" for the wins as she claimed that the former Alaskan Governor is "emboldening conservative women" and "reshaping the religious right" but then went on to question if pro-life women candidates could win statewide races in California because their views would be seen as "so yesterday." Incidentally, The Washington Times' Monica Crowley had to correct Clift as she pointed out her liberal spin wasn't even entirely accurate as Whitman is, in fact, "pro choice." [audio available here]

The following exchanges were aired on the June 12 edition of The McLaughlin Group: