Brad Wilmouth
On Sunday's Kasie D.C. show, MSNBC host Kasie Hunt followed in the footsteps of her new-mom colleague Katy Tur in returning from pregnancy leave and lobbying on air for a federal law in the U.S. to require employees receive paid parental leave. Mark Finkelstein
Looks like Epstein conspiracy theories are catnip for the Morning Joe gang. Two days ago, we noted that Joe Scarborough had tweeted out a bizarre theory based on Russsian involvement, and suggested that it was "bullshit" to label Epstein's death a suicide. The irony/hypocrisy of Scarborough's assertion was that he proceeded to condemn President Trump for having retweeted another… Kristine Marsh
Sunday on MSNBC’s Kasie DC show, host Kasie Hunt and her liberal guests took turns blaming President Trump’s “racism” and America’s “gun culture” for the previous day’s massacres. Sounding more like a Democrat politician, correspondent Jacob Soboroff ranted that it was “obvious” Trump was to blame and should “make us all sick.… Alex Christy
New York Times reporter Nick Confessore was on MSNBC's Morning Joe Tuesday to talk about his nearly 8,400 word article about Acting White House Chief of Staff and Director of the Office of Management and Budget Mick Mulvaney's changes to the Consumer Financial Protection Bureau entitled "Mick Mulvaney's Master Class in Destroying the Government From Within,… 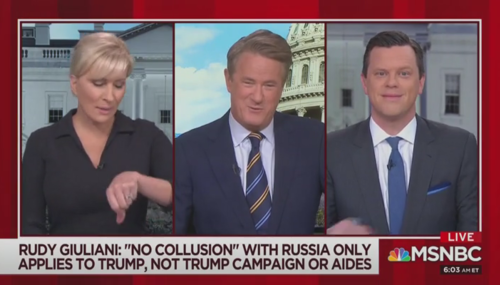 Mark Finkelstein
As we noted before, for over two years now Morning Joe has been broadly hinting that Rudy Giuliani has a drinking problem. The show was back at it today, with Willie Geist, Mika Brzezinski, Joe Scarborough and Katty Kay all unsubtly suggesting that Rudy had been drinking before his CNN interview with Chris Cuomo last night. Curtis Houck
While condemning the President’s visit this past weekend to California to witness the devastating wildfires himself and his comment on the topic, BBC World News America anchor Katty Kay argued on Monday’s Morning Joe that climate change “is probably the most pressing issue of our time.” Brad Wilmouth
In the past couple of days since the passing of former Republican Senator John McCain, several personalities on both CNN and MSNBC have lamented his selection of Sarah Palin as his vice presidential nominee in 2008 as a "mistake," with some suggestions that he helped set up the Republican party to go down the wrong track by doing so. P.J. Gladnick
In the wake of the Helsinki summit when liberals and their mainstream media allies were hurling everything including the kitchen sink in the form of the charge of treason at President Trump, it turns out that all their attacks only resulted in a bump in Trump's poll ratings. This caused MSNBC's Kasie Hunt to express shock at that result on her Kasie DC show on Sunday to the extent… Jeffrey Lord
So. What do we have here? First, Facebook censors a posting of a segment from the Declaration of Independence as “hate speech.” Next, actor James Woods loses his agent because of his conservative and pro-Trump views. Then last but not least, when it comes clear that the liberals of Martha’s Vineyards are turning socially on their old friend and neighbor Alan Dershowitz, the… Ryan Foley
During Thursday’s edition of Morning Joe, the panel discussed some of President Trump’s potential Supreme Court picks, specifically Amy Coney Barrett and Brett Kavanaugh. When Axios's Mike Allen suggested that the final decision will be determined by “the personal connection, who he feels comfortable with in that moment.” Scarborough responded: “So you’re… Ryan Foley
On the Wednesday edition of MSNBC’s Morning Joe, the panel went into full-on panic and hysteria mode as a result of President Trump deciding to pull out of the Iran nuclear deal. Co-host Mika Brzezinski alleged that President Trump "doesn't have a moral compass" and said that "the President’s sanity is being questioned globally.” She also implied that… Bill D'Agostino
Pettiness was the name of the game on Thursday’s Morning Joe as MSNBC panelists took turns attempting to negatively spin the release of three American hostages from North Korea.