On Wednesday night's "Hardball," Chris Matthews thought he saw racism in two ads targeted against Barack Obama, but when his media panel full of liberal journalists disagreed he back-pedaled a bit.

First up Matthews ran a clip of what he called a "nasty," ad by the North Carolina Republican Party. The Politico's Roger Simon agreed with Matthews that it was "nasty" but said, he wasn’t sure it was "unfair."

Then Matthews ran an ad hitting Obama for opposing the death penalty in Chicago for gang members and claimed:

"It's a giant permission slip to somebody who doesn't want to vote for him to begin with. And it’s also a permission slip for the Republican Party to use him as a target throughout the general election."

However Simon disagreed with Matthews’ implication that it had a racial tinge as he pointed out:

Hume Recites 'Rave Reviews' for Obama 'In Much of National Media'

Reciting three quotes highlighted Tuesday night on NewsBusters (and the MRC's Wednesday CyberAlert), plus one from CNN's Campbell Brown which we missed, FNC's Brit Hume led his “Grapevine” segment Wednesday night by illustrating how “Barack Obama's speech on race yesterday played to rave reviews in much of the national media.” Hume recounted:

On NBC, the Washington Post's Jonathan Capehart said the address was, quote, "a very important gift the Senator has given the country." NBC's own Chris Matthews said it was, quote, "worthy of Abraham Lincoln" and quote "the best speech ever given on race in this country." ABC's George Stephanopoulos said Obama's refusal to renounce his highly controversial pastor was, quote, "in many ways an act of honor." And on CNN, Campbell Brown called the speech "striking" and "daring," asserting that Obama had, quote, "walked the listener through a remarkable exploration of race from both sides of the color divide, from both sides of himself."

The ABC, CBS and NBC evening newscasts on Tuesday framed coverage of Barack Obama's speech, in reaction to the furor over the racist, paranoid and America-hating remarks of his long-time pastor, not by focusing on what it says about Obama's true views and judgment but by admiring his success in “confronting” the issue of “race in America” in an “extraordinary” speech. Indeed, both ABC and CBS displayed “Race in America” on screen as the theme to their coverage, thus advancing Obama's quest to paint himself as a candidate dedicated to addressing a serious subject, not explain his ties to racially-tinged hate speech. NBC went simply with “The Speech” as Brian Williams described it as “a speech about race.”

In short, the approach of the networks was as toward a friend in trouble and they wanted to help him put the unpleasantness behind him by focusing on his noble cause. “Barack Obama addresses the controversial comments of his pastor, condemning the words but not the man,” CBS's Katie Couric teased before heralding: “And he calls on all Americans to work for a more perfect union.” On ABC, Charles Gibson announced: “Barack Obama delivers a major speech confronting the race issue head on, and says it's time for America to do the same.” Reporting “Obama challenged Americans to confront the country's racial divide,” Gibson hailed “an extraordinary speech.”

NBC's Lee Cowan admired how “in the City of Brotherly Love, Barack Obama gave the most expansive and most intensely personal speech on race he's ever given,” adding it reflected “honesty that struck his rival Hillary Clinton.” On NBC, Washington Post editorial writer Jonathan Capehart asserted “it was a very important speech for the nation. It was very blunt, very honest” and so “a very important gift the Senator has given the country.” [Updated with Nightline]

Does the MSM have the vaguest clue about what makes Republicans tick? For months the liberal media has been propounding the absurd notion that John McCain's quest to obtain the Republican presidential nomination has been undermined by his support for the Iraq war. The Washington Post's Jonathan Capehart seems a good guy, but he has now added a clueless coda to that misperception, suggesting that McCain's efforts to repair his relations with the religious right has done him in.

Capehart was part of a panel on this afternoon's "Hardball." Mike Barnicle guest hosted for Chris Matthews, and asked the question "is John McCain gone?"

WASHINGTON POST EDITORIALIST JONATHAN CAPEHART: At least for me, as a member of the press, when John McCain . . . called Pat Robertson and Jerry Falwell "agents of intolerance," I thought now there's straight talk, that's someone standing on his own two feet. But then, when he walked away from that recently, I thought wait a minute, what happened to straight talk?

Fortunately, the Weekly Standard's Matt Continetti was there to set him straight.

Judging by the media's reaction one could assume the Hillary campaign isn't displeased by the release and subsequent publication by the New York Times of her college letters. During the roundtable portion of tonight's Hardball the media panel dissected how her letters during her college days affected her campaign and they mostly agreed they only serve to help humanize the notoriously cold candidate.

Joan Walsh of Salon.com declared: "I think they're intensely humanizing...So I thought there were a net gain, positive, for her." Walsh even encouraged her own daughter to read them for inspiration: "I have a teenager, so I want her to read them and remember, you know, it's, that we all have days like that." 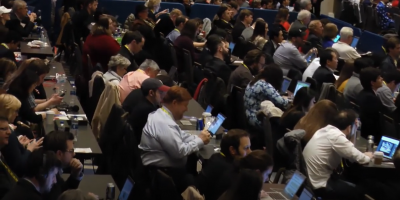