Along with racist, the word fascist is one of the most common epithets you hear tossed around. Has the constant repetition of the word made it lose its meaning? Does anyone really know what it means? These are questions that Jonah Goldberg seeks to answer in his #1 best-selling book "Liberal Fascism: The Secret History of the American Left, From Mussolini to the Politics of Meaning."

If you haven't picked up a copy yet, this is one book you need to buy.

As part of our tradition of bringing you in-depth interviews with America's political leaders, I took the opportuntity to speak by phone with Goldberg about "Liberal Fascism." Our conversation is quite extensive but well worth the read. Given the length of the interview (which is available in audio format as well as transcript), I've broken it down into two portions: the first in which Goldberg discusses his many leftist critics including his confrontation with comedian Jon Stewart, and the second in which Goldberg discusses conservatism and where he believes it's headed. This is the first installment. Read the transcript below or download an audio copy.

Last week's issue of the Village Voice featured Roy Edroso's review of "10 conservative Web scribblers," described therein as "buffoons" and in the article's subhead as "a confederacy of dunces." (Actually, Edroso names twelve bloggers, arriving at his figure of ten by counting the Power Line trio as one person.)

Lefty snark aside, the piece is problematic in part because at least two of the bloggers Edroso scrutinizes, Ann Althouse and Megan McArdle, really aren't conservatives. Moreover, by emphasizing individual bloggers he almost completely ignores lively large-group sites such as the Corner (he examines only Jonah Goldberg's contributions to NRO) and, of course, NewsBusters.

National Review's Jonah Goldberg has a new book out, "Liberal Fascism: The Secret History of the American Left," that argues essentially that liberalism is a sort of happy-faced fascism. It's a reasonable argument when one thinks about the endless crusades of liberal nanny-state promoters (state-run universal pre-K, the food police, anti-smoking zealots eager to stamp out smoking in bars, etc.).

Yet apparently online bookseller Amazon.com thinks it's something of a joke, categorizing the book among a list of best-selling parodies such as "The Zombie Survival Guide" and "Our Dumb World: The Onion's Atlas of the Planet Earth, 73rd Edition." (see screencap below page break):

You don't normally associate liberal pet causes like global warming with fascism, but National Review Editor at Large Jonah Goldberg makes a good case for why you could.

Goldberg appeared on January 15 at a Borders Bookstore in downtown Washington, D.C. to promote his new book, Liberal Fascism. According to Goldberg, tactics like comparing climate change skeptics to people "who believe that the Earth is flat," is comparable to those used by the power brokers within the rise of fascism during the early 20th century.

"The only people who say we need to get beyond ideology, get beyond labels, are the people who want you to shut up, you to stop disagreeing and agree with them," Goldberg said. 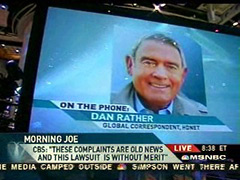 On Yom Kippur, which ended just last evening, Jews quite literally beat their breasts while asking forgiveness for all the sins committed during the previous year. The confessional prayer enumerates literally dozens of different transgressions. But while the syllabus of sin is seemingly comprehensive, there would appear to be one lacuna. Nowhere in the menu of misdeeds does "schadenfreude" appear.

Six years after the fact, the attacks of September 11th seem to have lost their cultural relevancy for much of America. In a thought-provoking essay Jonah Goldberg wonders how we got to this point. In his view, it is largely a communication issue, something for which the media shares a significant amount of blame (h/t Ace):

[I]t’s important to remember that from the outset, the media took it as their sworn duty to keep Americans from getting too riled up about 9/11. I wrote a column about it back in March of 2002. Back then the news networks especially saw it as imperative that we not let our outrage get out of hand. I can understand the sentiment, but it’s worth noting that such sentiments vanished entirely during hurricane Katrina. After 9/11, the press withheld objectively accurate and factual images from the public, lest the rubes get too riled up. After Katrina, the press endlessly recycled inaccurate and exaggerated information in order to keep everyone upset. The difference speaks volumes.