The closing of Borders book stores isn’t that newsworthy, but The Washington Post on Monday somehow turned it into a celebration of how liberal books sell well (and conservative titles don’t) in blue Maryland. Reporters Larissa Roso and Michael Rosenwald began at a store at Rockville’s White Flint Mall:

Many shoppers, such as Francie Kranzberg, went straight for the political stuff: a copy of "Blowing Smoke: Why the Right Keeps Serving Up Whack-Job Fantasies About the Plot to Euthanize Grandma, Outlaw Christmas, and Turn Junior into a Raging Homosexual," by Michael Wolraich. "I’m looking for Keith Olbermann’s book, too," she said.

At the White Flint store, there were enough copies of Jonah Goldberg’s "Proud to Be Right" to supply at least a dozen book clubs. But there was only one copy of Walter Mondale’s autobiography, "The Good Fight: A Life in Liberal Politics."

That's how Jonah Goldberg facetiously begins his latest column at National Review. NewsBusters and the Media Research Center have, of late, been documenting the media's newfound love for Ronald Reagan, and helpfully reminding them that most journalists were not just ambivalent to Reagan when he was alive, but were ourtight hostile to him. Goldberg describes this revisionist effort as "an almost Soviet airbrushing of the past to serve liberalism’s current agenda."

We couldn't agree more. Check out an exceprt from Goldberg's column below the break.

Al Sharpton on Monday said that he's going to be meeting with representatives of the FCC next week about revoking conservative talk radio host Rush Limbaugh's license.

On a special 9PM edition of the "Ed Show," the Reverend didn't mince words (video follows with transcript and commentary):

Albert Einstein said the definition of insanity is doing the same thing over and over again and expecting different results. And so goes the White House with these attacks on the U.S. Chamber of Commerce drummed up by the “professional left’s” blogosphere that it is using foreign donations to finance political advertising.

Syndicated columnist Charles Krauthammer however, had another take on what these attacks are. He said they’re not insane, but desperation of one of the highest degrees. During the Oct. 11 broadcast of Fox News Channel’s “Special Report with Bret Baier,” Krauthammer attacked the Obama administration, calling this campaign against the Chamber “reptilian desperation.”

Video Below the Fold

On this the 24th and final day of his Election Road Trip, Time's Joe Klein availed himself of the opportunity to attack center-left blogger Mickey Kaus and conservative writer Jonah Goldberg for "distort[ing] a striking point" made by a liberal Democrat vineyard owner from California that Klein quoted in a September 27 Swampland blog post.

Klein vented most of his spleen at Kaus, a blogger for rival magazine Newsweek.

Wealthy attorney and Iron Horse Vineyards founding partner Barry Sterling had simply argued that "the current, post-Reagan tax fetishism of the Republican party is foolish," Klein insisted.
"He made the point with a creative overstatement of the case--that he'd survived 70% marginal tax rates; indeed, the high rates caused him to work harder to make more money. I am absolutely certain that Sterling was not advocating a return to 70% rates, as Mickey well knows," Klein protested.
The Time reporter went on a few sentences later to label Kaus as a "feckless, puerile jerk at times."

Jonah Goldberg: One Kind of Hate Speech Supported on Campus

In his column in the Los Angeles Times, Jonah Goldberg covered a free-speech front that our politically correct news media do not want to touch: when "free expression" supporting a new Holocaust of the Jews in Israel is granted respect on campus. Goldberg was shocked by how one campus circled the wagons when David Horowitz spoke at an event on May 10 sponsored by Young Americans for Freedom:

Horowitz recently spoke at UC-San Diego. You can find an excerpt from his appearance on YouTube. In it, a young Muslim student from UCSD, Jumanah Imad Albahri, asks Horowitz to back up his attacks on the Muslim Students Assn. Horowitz turned the tables on her. In less than two minutes, she revealed herself as a supporter of the terrorist group Hamas. Horowitz then noted that Hezbollah, another terrorist organization, wants all Jews to return to Israel so they can be more conveniently liquidated in one place. Horowitz asks Albahri whether she's for or against that proposition. She is "for it."

I asked UCSD, via e-mail, whether the woman in question was censured in any way for endorsing bigotry and genocide, or if the video was somehow misleading. In response, I received boilerplate about how, in the tradition of Aristotle, UCSD treasures "discourse and debate" and how "the very foundations of every great university are set upon the rock-solid principles of freedom of thought and freedom of speech."

On Friday night's Real Time with Bill Maher on HBO, the host mocked Michelle Malkin's new book on the ethically challenged Obama administration, then mocked Jonah Goldberg, Rush Limbaugh, Ann Coulter, and Glenn Beck with fake books that show how conservatives have "jumped the shark" [sic] in attacking Obama after only six months in office:

Olbermann: 'Neocon' May Be ‘Code’ for ‘Stupidity’ and ‘Indifference to Human Life’

On Monday’s Countdown show, MSNBC host Keith Olbermann slammed Jonah Goldberg of the National Review during the show’s "Worst Person in the World" segment because Goldberg complained about the treatment of neoconservatives by liberals, as the National Review Online editor recently charged that "mainstream liberalism and other outposts of paranoid Bush hatred have portrayed neoconservatives – usually code for conservative Jews and other supporters of Israel – as an alien, pernicious cabal."

Olbermann, who has a history of blaming conservatives like Glenn Beck and Bill O’Reilly for violent acts by extremists, accused the "far right" of "enabling" recent murders, and then claimed not to have ever heard the term "neocons" associated with a particular "religious or ethnic group." He went on to suggest that the word "neocon" may really be code for "belligerence, pig headedness, stupidity, wasteful, indifference to human life," and "paranoid."

Despite all the criticisms of the Fox News Channel broadcasted on MSNBC for promoting tea party coverage, one thing hasn't been pointed out - how the NBC networks, including CNBC and MSNBC are given a pass for their shameless promotion of their Green Week and Green is Universal network events.

Jonah Goldberg, editor-at-large for National Review and author of "Liberal Fascism," appeared on Fox News Channel's April 18 "Fox News Watch" and commented on FNC's promotion of the tea parties, but the double standard of MSNBC's criticism of Fox News.

"I think that there's a perfectly legitimate criticism against Fox for not so much the coverage, but the commercials, you know - promoting the coverage, which was in effect advertisements for these things," Goldberg explained. "But, this was all transparent, people knew that's Fox was doing. But let's flashback to what GE, to pick up a point that Jim [Pinkerton] made - that GE basically issued a fatwa to NBC for Green Week, where they did hundreds of hours of environmental messaging in all of their dramas, news coverage, "Today" show - throughout the network and it was all hailed as a wonderful progressive thing. That is a much more pernicious promotion than anything Fox did." 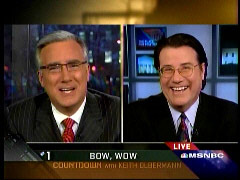 On Tuesday’s Countdown show, at the beginning of a segment about the Obama family’s pet dog, MSNBC host Keith Olbermann and MSNBC political analyst Craig Crawford, joked about FNC host Bill O’Reilly being a dog. Picking up on Olbermann’s earlier suggestion that he gets tired of hearing about presidential dogs, Crawford opened the discussion by ribbing the Countdown host about the possibility of the show getting its own pet dog.

After Olbermann disagreed, Crawford came back with a lame joke: "Well, you’ve already got O’Reilly’s show.

Olbermann responded: "That would be a female dog."

The over-the-top name-calling against the FNC host came just minutes after Olbermann used his "Worst Person" segment to slam Rush Limbaugh and Sean Hannity as he lectured the conservative talk radio hosts that one does not have to "spend every waking hour trying to annihilate" a political figure because of policy disagreements.

But Olbermann is well known for devoting a large portion of his program daily for the last several years to slamming President Bush – not only calling Bush a "fascist," but also suggesting last December that Bush administration members, presumably including President Bush himself, deserve to be "in hell" for some of their actions in the Iraq war. Olbermann: "I don’t know what, if any religion you belong to, but I suspect you’ll agree that people who ignored that many foretellings of preventable death should have a long time to think about it in hell!"

Republican presidential nominee Sen. John McCain, Ariz., has acknowledged his technological shortcomings, but some in the media continue to portray him as a techno-phobe with no meaningful contributions to that sector of the economy.

The September 16 "NBC Nightly News" examined McCain's rhetoric on the campaign trail in the wake of a serious banking crisis.  Correspondent Kelly O'Donnell reported one campaign advisor cited McCain's legislative effort opening the door to technological advancements as evidence of his ability to steer Americans through the turbulent time.

"And Brian, when an adviser today was stressing John McCain's economic credentials, he told reporters that McCain quote ‘helped make this little miracle happen' - the Blackberry or cell phone - citing his work on the Commerce Committee," O'Donnell said.

The future of conservatism is something which has become something of a hot topic. It's become evident to many that the historical moment that made the so-called Reagan coalition possible has passed, raising the inevitable question: where do we go from here? Has the right lost its way? Should conservatism be dependent upon the Republican party? What sorts of ideas should 21st century conservatism project?

These are just a few of the topics I asked Jonah Goldberg in Part II of our NewsBusters Interview with the author of "Liberal Fascism." See the partial transcript below or download an audio copy. Here's Part I in case you missed it.