Illegal immigrants get little in the way of welfare or other taxpayer-funded largesse, according to Kirsten Powers. And she's adamant about it.

WaPo Asks 'Who Cares' if President Golfs During Crisis, Forgets They Did in 2002 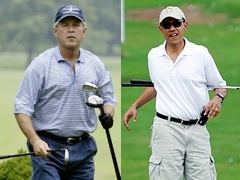 Poor Barack Obama. Being president can take a lot out of him. That's why he needs  to relax on the links, and relieve some stress into his golf game. No problem, says the Washington Post, the Gulf Spill can wait. This is the same Washington Post that berated President Bush for golfing while an armed conflict was taking place…in Israel.

Not that suicide bombings in Israel are an unserious matter, but doesn't the disaster in the Gulf require at least as much attention (far more, in my mind) from the President? The Post doesn't seem to think so.

So while the paper decried Bush's "golf cart diplomacy" and devoted over 600 words to suggesting that Bush's golf game was distracting from his work on the Israeli-Palestinian conflict, the Post found no such grounds to criticize Obama. As a reporter for one of the paper's blogs put it, "who cares?" Obviously not the Post (h/t Jim Hoft).

Gateway Pundit's Jim Hoft, who has been on quite a roll as of late, had the Media Bias Catch of the Day, Polling Division, this morning. Rush mentioned Hoft's post on his show this afternoon.

Jim then asked, "So, how does the state-run media report this news?" Here's the answer:

'60 Minutes' at It Again with Rove/Siegelman Story?

"60 Minutes" recently aired the claim that former Alabama governor Don Siegelman went to jail not for corruption, but because he belong to the wrong political party, and that the investigations that landed him in jail for bribery were politically motivated.

One of the most explosive claims made was that Karl Rove was involved in an attempt to entrap Siegelman: