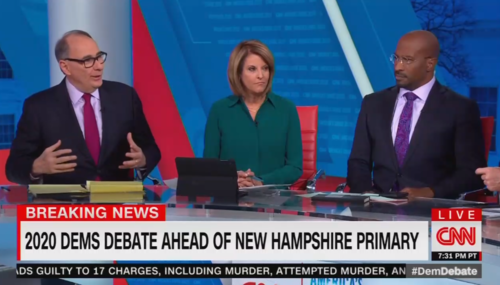 CNN: Uninspiring Biden Brought 'Get Off My Lawn' Energy to Debate

Nicholas Fondacaro
February 8th, 2020 12:16 AM
Following the ABC Democratic debate in New Hampshire on Friday, CNN’s panel of liberal journalists and activists were mostly in agreement when panning the performance and campaign strategy of former Vice President Joe Biden. Between them, the panel painted an image of an “angry” old man shouting “get off my lawn” across the stage, while failing to “inspire… 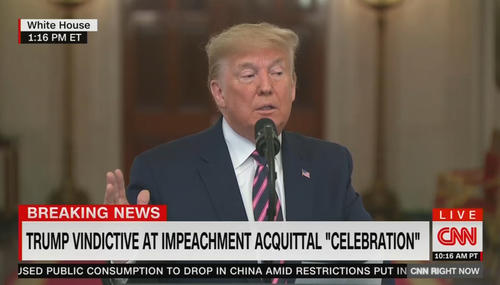 Curtis Houck
February 6th, 2020 2:53 PM
CNN showcased for all to see Thursday afternoon its undisputed position as leader of the opposition party and hate for President Trump, lashing out at the post-impeachment speech as an “angry,” “dark,” “disturbing,” “mean-spirited,” “poisonous,” “spiteful,” and “vindictive” “set of remarks” by a… 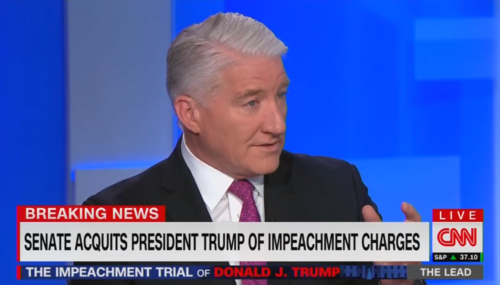 Nicholas Fondacaro
February 5th, 2020 6:10 PM
Moments after the Senate acquitted President Trump of the impeachment charges against him, CNN’s The Lead looked to the future and to House Democrats who were zealously trying to drum up more impeachment charges. “Double jeopardy does not apply in politics,” chief national correspondent John King proclaimed to the rest of the panel, clearly looking for Trump to be retried on the… 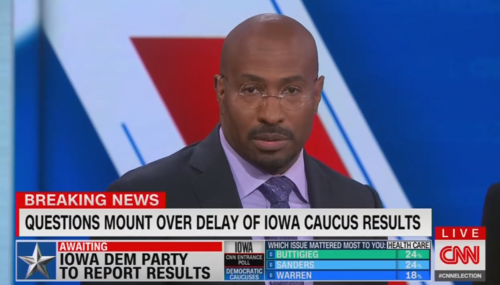 Frustration Setting in for CNN: Iowa 'Starting to Look Like a Debacle'

Nicholas Fondacaro
February 4th, 2020 12:28 AM
It’s past midnight and there’s still no official results from the Iowa caucuses and rumors said results wouldn’t be published until the morning. CNN’s patience wore wearing thin late in the 10:00 p.m. hour when their frustrations flashed. They were so desperate for numbers that host and liberal activist Van Jones began reading unverified numbers an apparent caucus… 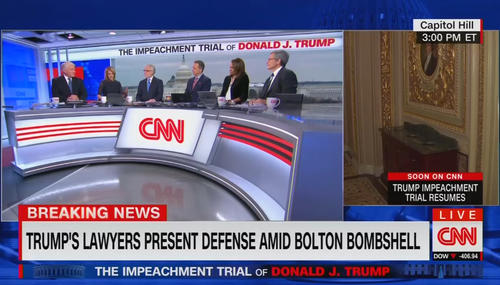 Curtis Houck
January 27th, 2020 4:40 PM
In contrast to spending last week as state-run TV for the House impeachment managers, CNN flipped the script Monday afternoon to express predictable anger at President Trump’s “insulting” legal team living “on a different planet than the rest of us” that included a supposedly ineffective and “mind-boggling” case from Ken Starr. 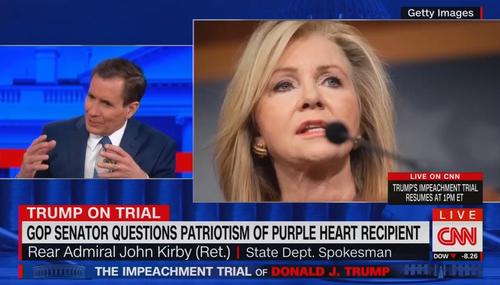 Tim Graham
January 24th, 2020 11:39 PM
CNN really lays it on thick when it comes to its own preferred experts driving the impeachment of Donald Trump. Sen. Marsha Blackburn (R-Tenn.) attacked Lt. Col. Alexander Vindman on Twitter, which drove CNN into a rage on Friday morning. Vindman's testimony against Trump was played by Democrats during their presentation on Thursday. 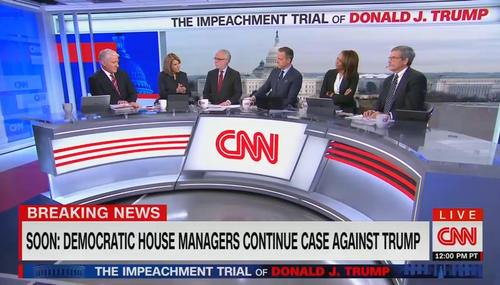 Curtis Houck
January 23rd, 2020 5:39 PM
Another day, another afternoon break on CNN with an oversized panel pretending to be proud parents of the House impeachment managers trying to undo the 2016 election. In Thursday’s afternoon break, CNN analysts, correspondents, and hosts sang the praises of the “clever,” “good,” and “interesting session” that, among other things, bashed Fox News and… 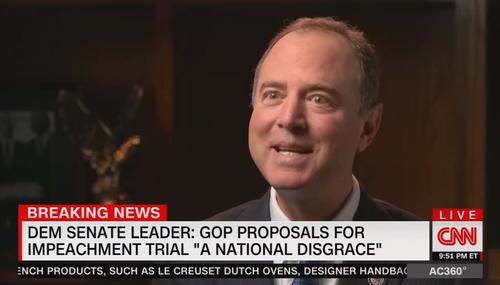 Brad Wilmouth
January 21st, 2020 3:35 PM
On Monday's Anderson Cooper 360, CNN's Gloria Borger filed a pre-recorded report in which she misleadingly portrayed liberal California Democratic Congressman and impeachment manager Adam Schiff as a "moderate" as she recounted his political career. Borger did not clarify that his voting record has never been moderate, and, after his already Democratic district became even… 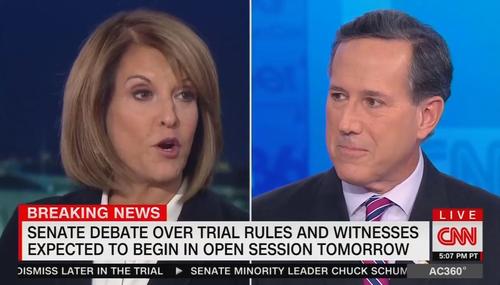 Brad Wilmouth
January 21st, 2020 12:54 PM
On Monday's Anderson Cooper 360 on CNN, conservative contributor Rick Santorum was outnumbered on a panel by liberals 5-1 as the group discussed the planned rules for President Donald Trump's impeachment trial in the Republican-controlled U.S. Senate. CNN analysts used words like "farce," "joke," and "atrocity" to complain about the rules. 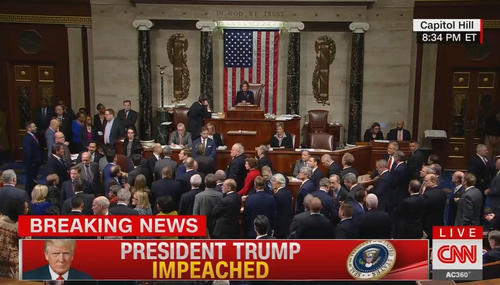 Curtis Houck
December 18th, 2019 9:16 PM
Whether it was repeatedly boasting of how impeachment will be a “stain” on Donald Trump’s legacy or expressing fear about what Trump will do in the future or heralding the exercise as a “great day” for “our constitutional democracy,” CNN couldn’t have been giddier about Wednesday night’s impeachment of President Donald Trump. 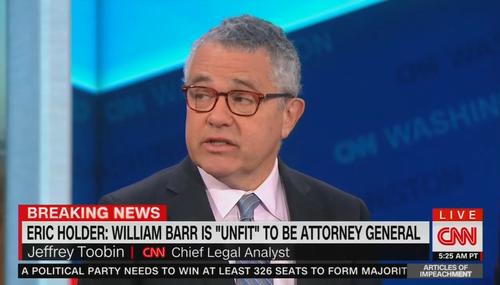 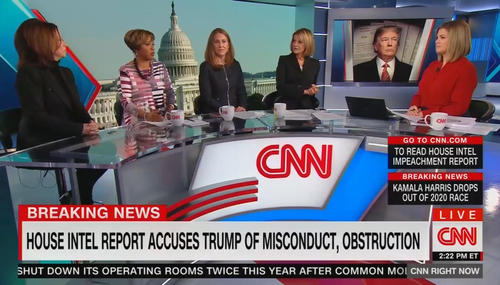 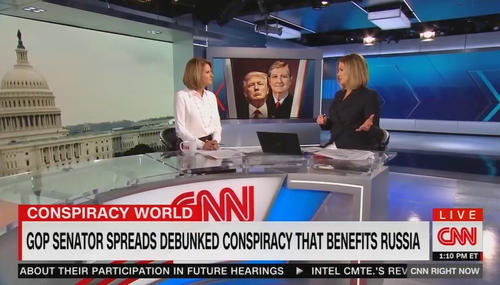 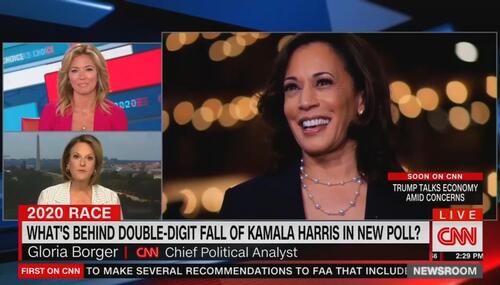 P.J. Gladnick
August 21st, 2019 11:57 AM
During the CNN Newsroom on Tuesday Glorida Borger told host Brooke Baldwin that the reason why Kamala Harris' rising soufflé suddenly deflated following the second Democrat presidential candidate debate in July was due to hypocrisy. What inspired this observation was a CNN poll published on Tuesday that revealed a startling plunge for Harris.