Next time you find yourself in a room with Andrea Mitchell, be careful what thoughts you permit to cross your mind.  The NBC correspondent evidently has the ability to read them.  Defending Caroline Kennedy on today's Morning Joe, Mitchell stated as a fact that Kennedy's press-evading performance in upstate New York was due to her desire not to appear presumptuous.

Continuing her advocacy, Mitchell went on to praise the very remarks Kennedy made yesterday that I found dangerously sleep-inducing. She then dismissed Charles Krauthammer's criticism of Kennedy as "an opinion piece" coming from "the right." For good measure, Andrea accused Andrew Cuomo—a rival for the Senate seat—of leaking to the press unflattering information about Kennedy's failure to have voted in many elections.

One of the harshest assessments of Gibson's performance came from syndicated columnist Charles Krauthammer Saturday who also took the opportunity to bash the New York Times for misrepresenting some of the specifics of the interview in order to discredit Palin (emphasis added throughout):

Couric: ‘Glimmer of Hope’ in Israel’s Agreement to Release Terrorists

When the Israeli government and the terrorist group Hezbollah carried out a prisoner release agreement in which Israel released five Lebanese prisoners while Hezbollah released the bodies of two Israeli soldiers who had been killed, there was a substantial contrast in the way the broadcast network evening newscasts reported the story. While ABC’s Charles Gibson and Simon McGregor-Wood reported on World News that one of the prisoners, Samir Kuntar, had been convicted of the "vicious murder" of an Israeli man and his four-year-old daughter, and that upon release he was "greeted in Beirut as a returning hero," NBC and CBS both skipped over any details of Kuntar’s crime, and CBS’s Katie Couric even listed the prisoner exchange as one of several "glimmers of hope" in the conflict between Israelis and Arabs. Couric: "For the first time in years, there are some glimmers of hope in the Arab-Israeli stalemate -- a virtual cease-fire between Israel and Hamas, a prisoner exchange with Hezbollah, and the beginning of low-level talks between Israel and Syria."

CNN and FNC further detailed the brutality of Kuntar’s crime, and FNC noted his popularity among many in Lebanon. FNC’s Morton Kondracke: "What’s most disgusting is that the Lebanese performance, tens of thousands of people turning out to welcome home a terrorist who had killed a policeman, a civilian, and then bashed in the head of the civilian's four-year-old daughter. And he's being welcomed home as though he’s a national hero, with the president there, the prime minister there, the speaker of the parliament. This is supposed to be an ally of the United States, Lebanon. What it indicates is that Lebanon, that Lebanese politics is now owned by Hezbollah ... they have veto power over whatever the Lebanese government does, you know. Lebanon is close to being lost." (Transcripts follow) 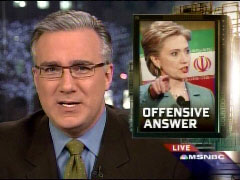 On Thursday's Countdown show, MSNBC host Keith Olbermann seemed worried by Hillary Clinton's pledge during Wednesday's debate that "if Iran attacks Israel, apparently Senator Clinton is going to order massive retaliation." Olbermann suggested Clinton had "set herself up as an imperial President waiting to happen." After the MSNBC host contended that Clinton's pledge "may be further to the right than the Bush administration," liberal t

Matthews: I Get Emotional, Obama 'Gets To Me'

By Mark Finkelstein | March 21, 2008 9:22 AM EDT
It wasn't quite a "thrill up up my leg" moment, but Chris Matthews clearly hasn't gotten over his love affair with the candidacy of Barack Obama. It was a discussion of NM Gov. Bill Richardson's endorsement of Obama on today's Morning Joe that inspired an outpouring of emotion in which among other things Matthews acknowledged Obama "gets to me."

CHRIS MATTHEWS: I think [Richardson's] a gutsy guy, his own man, and I think it's a powerful endorsement. It certainly would have been powerful if it had gone the other way to Senator Clinton. I think it'll be a prized endorsement for Senator Obama, especially coming from a, he also comes from an interesting background. He always says, he says, you know, I've got a, what does he say? I've got an English name, I've got a Mexican mother, and I look like an Indian. I mean, he's, he's always had an interesting --

Time magazine has terminated its relationships with its two conservative columnists, Charles Krauthammer and William Kristol. The New York Observer has the details:

The exact reasons for the departures of Mr. Krauthammer and Mr. Kristol, both high-profile backers of the Iraq war, are not entirely clear.

“I was very happy to work with them,” said Mr. Krauthammer on the phone from his Washington office. “And I have a lot of things that occupy me.”

Asked if he would have preferred to stay with the magazine, Mr. Krauthammer, a Pulitzer Prize winner who writes a regular column for The Washington Post, suggested there wasn’t much of a choice. “It’s a hypothetical that didn’t arise,” he said.

Fred Thompson Says Fox News Is Biased Against His Campaign

This should certainly raise the eyebrows of folks around the country who believe Fox News is too conservative.

As reported hours ago by TheHill.com (video available here):

Truth be told, I was hoping "Fox News Sunday" would totally ignore Friday's announcement that the Global Warmingist-in-Chief won the Nobel Peace Prize.

After all, mainstream news outlets regularly boycott events they deem un-newsworthy, like people receiving the Medal of Honor, for example.

As such, in the grand scheme of things, what really was the significance of a charlatan winning an award -- one that had previously been given to that marvelous humanitarian Yasser Arafat, no less! -- exactly one day after a real American hero was posthumously bestowed one of the finest honors in our land to a deafening media silence?

Despite my skepticism, as the panel discussion began Sunday, and Bill Kristol enunciated likely the exact sentiments shared by people still capable of thinking for themselves, I realized just how fortuitous it was for this to be the first topic on the docket (video available here):

Krauthammer's Wisdom on 'Malevolent Clown' on Display at 'Today'

Scanning the columns at Townhall.com is part of my early-morning routine, and it was at about 6 A.M. today that I read Charles Krauthammer's "Obama Bombing." I marveled at how perfectly the Pulitzer Prize-winning author had captured the essence of Hugo Chavez, calling the Venezuelan thug "a malevolent clown."

Krauthammer's words obviously impressed Matt Lauer, too. For barely an hour later, I was pleasantly surprised to find the psychiatrist-turned-pundit's phrase turning up on the screen at "Today," with Lauer clearly seeming to advance the conservative commentator's theory.

"TODAY" CO-ANCHOR MATT LAUER: Let me ask you about this debate, the issue that came out of the debate, this whole inexperience-versus-change thing, when Barack Obama answered that in the first year of his presidency he would meet with people like Castro and Chavez. Let me read you what Charles Krauthammer wrote in the Washington Post this morning:

Do the Democrats want to risk strike three, another national security question blown, but this time perhaps in a final presidential debate before the '08 election, rather than a midseason intraparty cattle call? The country might decide that it prefers, yes, a Republican -- say, 9/11 veteran Rudy Giuliani -- to a freshman senator who does not instinctively understand why an American president does not share the honor of his office with a malevolent clown like Hugo Chavez.