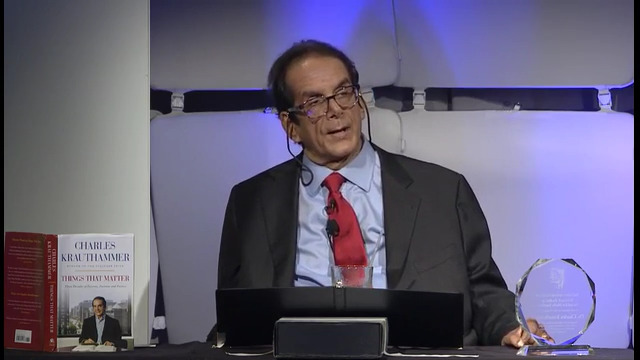 Sad news on Thursday as word came that longtime conservative columnist and Fox News regular Charles Krauthammer has passed away. Krauthammer announced on June 8 that he only had a short time left to live, due to a recurrence of cancer.

In 2013, the Media Research Center awarded Krauthammer the William F. Buckley Jr. Award for Media Excellence, and he spoke at our annual Gala on September 26 of that year. He was introduced by another conservative media star, Cal Thomas, who praised Krauthammer: “When he speaks or writes, people listen. His voice carries weight because he is cerebral in an age of celebrity, and substantive in a time of silliness. He speaks with authority, which is another way of saying, he knows what he’s talking about.”

Below, you can watch Thomas’s full introduction as well as Krauthammer’s humorous remarks from that night, as well as read a partial transcript below the video.

CHARLES KRAUTHAMMER: I’m really happy to be here tonight. I’m honored to be among you, particularly at the Media Research Center, who do God’s work, namely slaying heathens. There’s not nearly enough heathen-slaying going on in this town...

Now, some of you insist on calling the President [Barack Obama] a liberal. You know what a liberal is — he’s someone who doesn’t care what you do, as long as it’s compulsory. But regarding Obama, that really isn’t true....Barack Obama is not a liberal, he’s a social democrat.

The story begins after Winston Churchill was defeated in the election after the Second World War. He becomes leader of the opposition, and Attlee becomes the Prime Minister. So, one day Churchill goes down to the men’s room in the House of Commons, and there standing alone at one of the urinals is Clement Atlee.

Churchill goes all the way to the other end of the men’s room, 15 stalls down... and Attlee is somewhat surprised. He looks over to Churchill, and he says, “Feeling a bit standoffish, are we Winston?”

And Churchill says, “Not at all, my dear Clement. It’s just that every time you see something large, you want to nationalize it.”

I want to say, especially to the young people here, keep your spirits up as we careen our way to Hell in a handbasket.

Enjoy the ride, and just remember, it’s always darkest before dawn, and then it gets darker still [audience laughter] but do not lose your youthful optimism. Let me remind you of the words of my favorite pundit, Otto von Bismarck, not known for his punditry, who once said “God looks after idiots, children, drunkards, and the United States of America.”