CNN's Nguyen Asks: 'Was It Taunting, Was It Teasing, Was It Harassment?'

On CNN Saturday Morning News today, anchor Betty Nguyen interviewed a psychiatrist about Major Nidal Hasan, who killed 13 and wounded 30 others in a shooting spree Thursday in Fort Hood, Texas.  She began by delving into possible reason for Hasan's actions:

NGUYEN: Dr. Paul Ragan, a psychiatrist who specializes in post-traumatic stress disorder joins me now from Nashville. Dr. Ragan, let me ask you this. Are the Ft. Hood shootings the action of someone who might have suffered from PTSD?

DR. PAUL RAGAN, SPECIALIZES IN POST-TRAUMATIC SYNDROME: I think actually that's fairly unlikely. Dr. Hasan just finished a two-year fellowship at the Center for the Study of Traumatic Stress and he had only been an independent Army psychiatrist for about four months. That is at an operational base. So for him to have been suffering from PTSD I think is highly unlikely.

CNN and The Washington Post had institutional memory lapses today.  On CNN Saturday Morning News, this was the lead story from anchors Betty Nguyen and T.J. Holmes:

BETTY NGUYEN, CNN ANCHOR: Yes, good morning, everybody. I'm Betty Nguyen. We do want to thank you for starting with us. It is the 21st of February, and we do want to begin with some breaking news.

HOLMES: Yes, and kind of a -- a shocker that went through the -- the newsroom this morning.

Yes, you remember that name and you remember that face in all likelihood. That is Chandra Levy, the 24-year-old who went missing some nine years ago now -- eight years ago, more specifically. An arrest, we're being told now, is imminent in this case. This is coming to us from our CNN affiliate out in the Bay Area, KGO. This is one of the most infamous D.C. cold cases out there. Again, some eight years old.

Just a little background on this case. You remember this young lady went missing in D.C. Got a lot of attention for one reason because of her relationship that it came out that she had with Congressman Gary Condit, who is no longer a congressman now. But a relationship that came out.

He was never -- there he is there -- never officially a suspect in the case.

HOLMES: But that was a reason this case got so much attention. And now, Betty, as we're hearing, an arrest...

HOLMES: ...is imminent in this case.

NGUYEN: The case not only ended Condit's career, but we are learning this morning that there is a suspect, a man who is indeed behind bars at this hour. 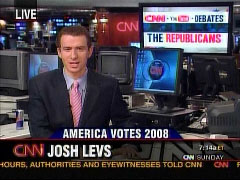