The fill-in news anchor used the erroneous term during a 14-second news brief 37 minutes into the 7 am Eastern hour: "One of two women who accuse Republican presidential candidate Herman Cain of sexual assault wants to speak out. The woman's lawyer say she wants to be released from a confidentiality agreement, so that she can publically respond to Cain's recent claims regarding the case."

Nguyen gave a second brief on the Cain story just under an hour later, but this time, correctly summarized the latest development on the controversy:

NGUYEN: One of the women who accused Republican presidential candidate Herman Cain of sexual harassment wants to tell her story. The New York Times reports one of the accusers was paid $35,000 in severance pay by the National Restaurant Association, after she said an encounter with Cain made her uncomfortable. A lawyer for the second woman wants the restaurant association to waive the confidentiality deal. 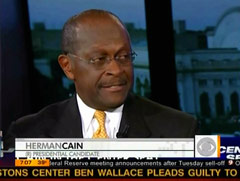 JOEL BENNETT, ATTORNEY FOR ACCUSER: I think the National Restaurant Association ought to waive the confidentiality and non-disparagement positions, and let the two women, if they choose to do so, come forward and tell their stories, so that it can get a complete public airing.

NGUYEN: When Cain was asked why he doesn't give his permission to let the accuser speak, he said there are legal questions that must be answered first.

Despite this accurate second brief, CBS didn't issue a correction concerning the initial report during the remainder of The Early Show.