It is amusing to me that the South was always considered by Democrats as "the people", the salt of the Earth, and the so-called rank and file in the "solid South" when the they had a lock on their votes from 1820 all the way until 1980. The South was the all-American region and the Democrats loved them dearly. Yes, for over 160 years the Democrats counted the Southern states as stalwarts and they loved them like brothers.

By Tom Blumer | December 6, 2006 3:23 PM EST
Following up on one aspect of Cavuto's rout of Krugman on Fox News yesterday (covered overall by Noel Sheppard earlier today here at NewsBusters) --

Cavuto elicited this stunningly out-of-touch statement from Krugman about the situation for the average person and the middle class that is obviously not true (excerpt is at the end of this Hot Air clip):

Neil Cavuto Smacks Around Paul Krugman While Calling Him a Liar

This was just too delicious for words…but I’ll try. As many of you are aware, most conservatives who study the economy and the markets view the New York Times’ Paul Krugman as being one of the most disingenuous pols on the landscape. Krugman has regularly been shown to flat out lie about economic data in his articles to prove his specious points, and was accused by the Times’ former ombudsman Byron Calame of regularly doing exactly that.

Well, on Tuesday, Krugman got his well-deserved comeuppance as Fox News’ Neil Cavuto called him out for such errors in transmission, and actually called Krugman a liar (must-see video available here):

Krugman then actually had the nerve to respond: “I haven’t heard a lie yet.” He mustn’t proofread his work. Luckily, Neil was having none of this:

ABC's "World News" last night aired a story based on some numbers crunched by a left-leaning think tank about nearly 2 million Americans in "extreme" jobs that cause them to burn the candle at both ends. Of course most of them are very well-compensated and have loads of responsibility on their shoulders. And then some are trial attorneys.

Guess which of those two categories Betsy Stark chose from to flesh out the plight of the overworked in America. Yeah, you guessed right.

For the second time in less than two weeks, CNN has advised the Republican Party on how to succeed. During the Friday edition of "The Situation Room," reporter Bill Schneider informed the GOP that the way for them to recover from midterm losses is to imitate Governor Arnold Schwarzenegger and embrace liberal policies:

Mark Trumbull of The Christian Science Monitor has noticed something I mentioned last week, but had to try to get a dig in while doing it (bold is mine):

American paychecks are rising again at a pace not seen since the 1990s.

The pay increase amounts to 4 percent on average over the past 12 months, and it comes at a very helpful time for millions of households.

For three years, pay increases haven't kept pace with the rising cost of living. Then came this year's housing slowdown, which has further squeezed family finances.

Those setbacks, however, are now being offset by rising income. Four percent may not sound like much, but you have to look back to 1997 to find a calendar year with a gain that big.

First, a correction: Trumbull's statement about pay increases not keeping pace with inflation "for three years" is incorrect. Start with this chart from the Census Bureau (go to the bottom half of the link for the "real income" version):

The economy isn’t doing well, correct? The average American is going backwards, right? Isn’t that all we heard before the elections?

Well, in another post-election stunner, the Christian Science Monitor has chosen to share the truth with Americans, sadly almost two weeks after the nation went to the polls. In an article amazingly titled “A brisk rise in American wages; Pay rose faster than the cost of living for the first time in years” (h/t to Drudge), author Mark Trumbull wrote what many on the right have been claiming for quite some time:

American paychecks are rising again at a pace not seen since the 1990s.

The pay increase amounts to 4 percent on average over the past 12 months, and it comes at a very helpful time for millions of households.

Wait a minute. The press have been saying for years that wages are declining. How can this be? Trumbull continued:

Bolded words are mine:

Wal-Mart, according to CNN's Ali Velshi, is the store "everybody kinda loves to hate."

Well, yeah, Ali, maybe to the liberal journos you lunch and have cocktails with who probably last set foot in a Wal-Mart sometime back in grad school.

See the story here. Looking forward to your feedback. 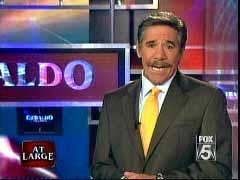 Fox News' Geraldo Rivera cheered the Democrats' victory last night as he railed against the "anti-immigration" GOP, called Rush Limbaugh, "snot-nosed," and campaigned for a minimum wage increase. On the syndicated Geraldo At Large, Rivera said of Republicans who opposed illegal immigration, "I am delighted to say that they got their butts kicked!" Rivera then mocked Limbaugh as he declared Claire McCaskill "was propelled to vic

Lou Dobbs must be perfecting his “Stewie Griffin" impression.

“Victory is mine,” he seemed to gloat to viewers as with smug delight CNN populist gadfly and resident protectionist applauded the passage of six minimum wage increases in states ballot booths across the country.

Before the election, Dobbs was quite active in pushing such an increase both on his show and in his book, “War on the Middle Class.” Dobbs had a pre-election one-hour special by the same title, biased in favor of more taxation and regulation of the economy.

Following Christine Romans’ report on the initiatives, Dobbs chose to lecture the U.S. Chamber of Commerce and The Heritage Foundation for what he sees as their wrong-headed opinion on the matter.

Read the full article by my colleague Julia Seymour.

The MRC's Business & Media Institute has also documented how Dobbs is not alone among his CNN colleagues in attacking opponents of minimum wage hikes.

Just four days before the election, the network news shows downplayed reports of a major drop in the unemployment rate and the creation of 231,000 new jobs. CBS’s Katie Couric groused, “But do the jobs out there pay enough?” NBC’s Brian Williams declared, “That was below expectations,” and ABC’s Charles Gibson gave the issue a total of 15 seconds.

That wasn’t the way the networks handled bad news in 2002 and 2004, when the final employment reports before Election Day were disappointing. On both occasions, ABC’s “World News Tonight” began its broadcast discussing the negative reports.