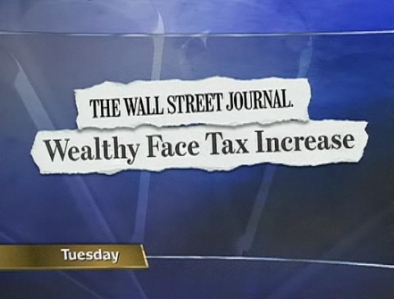 A rather shocking thing happened on Sunday's "Meet the Press": host David Gregory asked Alan Greenspan and Henry Paulson if it would be a mistake to let the Bush tax cuts expire.

Chatting with the former Federal Reserve Chairman and former Treasury Secretary, Gregory referenced Tuesday's Wall Street Journal article about what the impact of allowing these tax cuts to expire would be on the budget and the economy.

Gregory first asked Paulson and then Greenspan, "Is that a bad idea?" (video embedded below the fold with transcript, relevant section at 6:48): 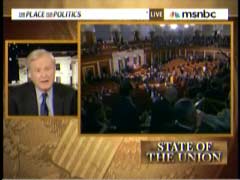 On Wednesday's Countdown show on MSNBC, shortly before the beginning of the State of the Union address, as Keith Olbermann discussed the speech with Chris Matthews and Rachel Maddow, after Olbermann brought up the possibility that President Obama would give a divisive FDR-style speech, Matthews seemed to lament that such a speech would "spook" the middle class, and, as he credited the Democratic party with actually "creating" the middle class, he argued that Democrats are a victim of their own success.  After claiming that it would have been "unpatriotic" not to increase government spending in time of recession, he went on to describe President Obama's economic policies as "conservative": "Everybody who studies economics knows if you have no business spending, no consumer spending, the government has to spend. That is reasonable and I would argue conservative economics."

At about 8:57 p.m., after contending that President Herbert Hoover "proved to every single American that the Great Depression was Republican doing," Matthews made his extraordinary claim about Democrats "creating" the middle class:

Contrary to what the Left and their media minions told Americans in 2005 when President George W. Bush wanted to reform Social Security, the nation's largest entitlement program is now projected to run deficits for at least the next two years.

In an article on the subject published Sunday, the Associated Press mysteriously hid the seriousness of this revelation while never once mentioning the Republican push to solve this problem four years ago, or that Democrats in January 2006 -- including Sen. Barack Obama (D-Ill.) -- actually applauded the death of the previous year's reform efforts.

The obfuscation began with the headline:

Social Security: The Closer You Look, the Worse It Appears; Media Has Ignored for Months

Thanks to info "steveegg" at No Runny Eggs linked me to earlier today, I had to add the word "Annual" before "Cash Flow" at this post (at NewsBusters; at BizzyBlog) that originally appeared Wednesday.

That's because the system is already running monthly deficits, and significant ones.

Back in February, the system also ran a deficit. It was bad news, but because February is an unusual month containing a full month of payments but only 20 business days of collections (actually 19, since Presidents Day is a federal holiday), I didn't think it was an indicator of a near-term problem when I noted it in early April. I was wrong.

The degree of the decay is obvious when you look at July's and August's results. The drastic decline in year-over-year collections noted in Wednesday's post indicate that September is almost certainly going to be no better, and will probably be worse.

Ed Morrissey at Hot Air had the catch of the day yesterday when he revealed, based on Congressional Budget Office internal projections distributed to Congress during the summer, that the Social Security system will spend more cash than it takes in during the government's next fiscal year ending September 30, 2010. Read about it there, or here, because you won't see the establishment media acknowledge the existence of these revelations.

Morrissey isn't clear as to when the report was prepared, but if it dates back to July or even early- mid-August, it's possible that Social Security will show a measly positive cash flow of less than $10 billion when the dust settles on the current fiscal year that will end next week, compared to +$72 billion a year ago. That's because the decay in Treasury's cash collections during the current quarter has been that bad.

Here's the relevant portion of the spreadsheet Morrissey obtained: 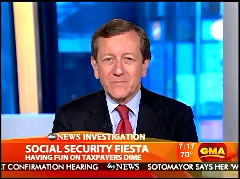 ABC's Brian Ross on Wednesday investigated a subject that has been skipped by CBS and NBC's morning shows, the more than $1 million spent by the Social Security Administration for its employees to attend lavish retreats, complete with a motivational dance company performing for the government bureaucrats. Host Chris Cuomo asserted that Social Security may be "on the brink of financial ruin. But, you would never know it from a recent luxurious retreat paid for by your tax dollars."

Good Morning America's Ross, who has spend much of 2009 delving into whether or not Wall Street executives should fly on private jets or go on lavish retreats, provided some consistency by looking into a story that has, so far, been ignored by CBS's Early Show and NBC's Today. He explained that Social Security is "expected to be insolvent in less than 30 years, unless taxes are raised substantially. But, there was no sense of financial crisis when almost 700 Social Security executives gathered here last week at the Arizona Biltmore in Phoenix."

And that doesn't even count Crutsinger's Krugmanesque rewrites of the history of the 1930s Depression era and 1990s Japan, or the apparatchik-like tone present in a few of his paragraphs.

Yesterday, in the process of passing on news that bloggers such as Ed Morrissey at Hot Air and outfits like the Heritage Foundation were onto earlier, Bloomberg's Kevin Hassett delivered a stinging indictment of the establishment media for being asleep at the switch (the sole exception appears to be a video report at PBS). But while he does a good job identifying the problem and indicting journalists for ignoring the news, his prescription for a solution is badly wanting.

The news? The days of Social Security surpluses are over, six to possibly eight years earlier than was thought to be the case just a year ago.

Here are excerpts from Hassett's commentary ("Recession Bites Into Social Security’s Surplus"). His first word reveals what he thinks of the nation's political elites, and of the media that are supposed to be watching them:

Cramer: 'This is the Greatest Wealth Destruction by a President'

On Tuesday's "Today" show, the outspoken "Mad Money" host said: we have "an agenda in this country now that I would regard as being a radical agenda";  Obama's just announced budget "put a level of fear in this country that I have not seen ever in my life," and; "This is the most, greatest wealth destruction I've seen by a president."

He also called Timothy Geithner "an invisible treasury secretary," and expressed hope that the next time he goes to Capitol Hill "he doesn't throw the drowning man the anvil like he did the last time he spoke" (video and transcript below the fold, file photo):

The self-aggrandizing denizens of Hollywood constantly scold Americans over a lack of national healthcare. It is the biggest failure of American society ever that there is no cradle to the grave program for free health care, they constantly tell us. And now, in keeping with these nearly universal Hollywood "principles," to prove how Hollywood is far more moral than we lowly citizens of flyover country, and to show that they are better than the great unwashed in the backwaters of America... Hollywood is closing its nearly 90-year-old Motion Picture Fund hospital and accompanying long-term living facilities for aging actors.

Yep, dumping it. Walking away from the facilities for free healthcare for actors. Fuggedaboutit.

AP's 'Q&A' on Geithner's Taxes Has Excuses Galore, No Mention of 'Reimbursements' Pocketed My chronicle of AP's largely weak coverage, most of which has been previously detailed at NewsBusters (here, here, and here), is at the end of this post.

No AP report I have seen has noted that Geithner applied for and merely pocketed partial "reimbursements" from the International Monetary Fund for payroll/"self-employment" taxes. He signed IMF forms saying that he had paid or would pay those taxes. He didn't pay up for 2003 and 2004 until his returns were audited. He more than likely never would have paid up for 2001 and 2002 if he had not been nominated, even though a strong case could be made that he engaged in tax evasion.

These aspects of Geithner's tax situation, if widely known, would, I believe, cause the average taxpayer to object strongly to the very idea of his nomination. AP's alleged journalists appear to believe that this cannot be allowed to happen.

AP Personal Finance writer Dave Carpenter, in a mostly Q&A piece with a really weak title ("Meltdown 101: US tax laws can even foil the pros"), continued the silence on pocketed reimbursements yesterday afternoon (stored here for future reference). He also seems to have found every excuse for Geither except "the dog ate my W-2":

Madoff Gives Us Lots to Think About This Christmas

This is a timely op-ed from Dan Gainor of BMI.

Christmastime is the time of giving. So we can thank Bernie Madoff for giving Americans some special gifts this holiday season.

Yes, I said thank him. OK, maybe not a lot. But the one-time financial wizard's downfall is a morality tale that provides so many lessons it's almost impossible to know where to start.

If you've been living under a rock, the former chairman of the Nasdaq has been charged with securities fraud. Not just ordinary securities fraud, either. Reportedly, Madoff's sons turned in their father, and who could blame them. He had allegedly confessed to them "that his investment business was a giant Ponzi scheme' that cost clients $50 billion, a lawyer for the brothers" told Bloomberg.