Schizo 'Conventional Wisdom' at Newsweek on Congress and Auto Industry

On Friday, Newsweek.com's Conventional Wisdom gave an approving up-arrow to Congress for brow-beating Detroit auto executives. The magazine lauded the Democratic Congress for having "rediscovered what oversight means."

But what a difference four days make. The December 9 Conventional Wisdom lambasts the notion of a federal auto industry "czar":

In a Dec. 6 interview in Stockholm, Sweden, the Nobel Prize-winning New York Times columnist told the ironically named Adam Smith, editor-in-chief of Nobelprize.org, that he found himself more effective in his role at the Times lately He said he was more influential in shaping policy as a journalist than he would be in a high-ranking position on the Obama economic team.

"I like to think I'm a good analyst," Krugman said. "But, I don't think I'm a good bureaucrat of any kind. I might think differently if I wasn't at the Times, but as it is I have a mouthpiece, people are listening. I probably can have as much influence, as say on the shape of this upcoming economic stimulus package from where I am as I could if I were, you know, the third-ranking member of the Obama economics team - something like that, so I think it's probably as good of position as any."

Ed Schultz Condemns Media Not 'Cheerleading' for Bailout of Detroit

Liberal radio host Ed Schultz is fed up with denizens of mainstream media and their skepticism about yet another federal bailout, this one for Big Three automakers.

Here's what Schultz said on his nationally syndicated show Dec. 3, prior to Democrats in Congress announcing a "rescue package" for Detroit --

"Folks, why are you being such a hard ass on the Big Three? And I'm asking the question of the networks, I'm asking it right up, where's the cheerleading?!"

Lest anyone get the impression Schultz was kidding, he hammered away at this later in the show while speaking with a caller --

In only the latest example of how out of touch Newsweek magazine truly is with reality, the magazine Web site's Conventional Wisdom feature for December 5 praised an institution with lower poll numbers than outgoing President George W. Bush.

Democrats, including president-elect Barack Obama and Senate Banking Committee Chairman Christopher Dodd, received more money in campaign contributions from Fannie Mae and Freddie Mac than any other members of Congress.

You couldn't tell that from an Associated Press article published Sunday which completely blamed Republicans for the lack of regulation and oversight of Freddie Mac.

In fact, when you add it all up, Pete Yost's "AP IMPACT: How Freddie Mac Halted Regulatory Drive" is more like a blog posting at a Netroots website than something that should come from the nation's leading wire service (h/t NBer Dana Brown):

If you needed any more proof that liberal media members don't give a darn about the state of the economy or the American people, and instead just want to raise taxes, you got it Sunday when Tom Brokaw advocated gas prices, which have plummeted recently, be kept at $4 a gallon with government keeping the added cost.

Coming just two days after it was announced that America lost over 500,000 jobs in November, Brokaw, in what could be his last performance as "Meet the Press" host, actually asked Barack Obama why taxes shouldn't be dramatically raised on gasoline with revenues to be spent on alternative energy, and to send a signal that folks won't be able to "just fill up [their] tank for 20 bucks anymore."

This came in response to president-elect uttering another disturbingly socialist statement that should make clearer his spread the wealth motives (video embedded below the fold with relevant section at 6:00, readers are encouraged to review Mark Finkelstein's earlier piece on this subject, file photo): 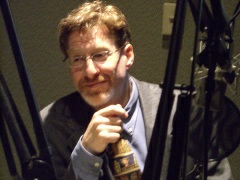 Only a professor, preferably a sociology professor, one with way too much time on his hands, could have come up with this one.  His solution to the Detroit crisis that has the Big Three automakers on the brink of bye-bye?  Unionize their foreign competitors manufacturing in the USA!

Now why didn't we think of that?  Because we're not Jonathan Cutler, associate professor of sociology at Wesleyan University.  His notion in a nutshell, contained in his Los Angeles Times column of today [emphasis added]:

[N]ot to tear down the historic and heroic gains won by prior generations of UAW workers. If there is hope long term -- for the unionized Big Three companies and for the UAW -- it rests in dealing with the unfinished business of the 1980s: unionizing the unorganized transplants.

If It Works For Chris . . . Carlson 'Announces' Senate Run

Always irreverent, Tucker Carlson seems freer than ever to aim a few jabs at his network and the people that work there.  On today's Morning Joe, Tucker landed a one-two punch. With all the talk focusing on Detroit, Carlson let the cat out of the bag that NBC is implementing layoffs of its own.  Tucker played off that news, tweaking Chris Matthews along the way, by announcing that he too was planning a Senate run, one in which a bailout of the news networks would be the centerpiece.

Tucker, an unreconstructed libertarian, spoke in opposition to the Detroit bailout.  After observing that capitalism without failure is like religion without sin, he made his tongue-in-cheek announcement.

"Talk about too big to fail," said managing editor of Time Richard Stengel on MSNBC's "Morning Joe" Dec. 4, who was on the program promoting the latest cover story for the magazine entitled, "The Case for Saving Detroit." Stengel:

"I find the fact that so many Americans are unsympathetic to Detroit to be kind of amazing," Stengel said:

We make the case that in fact the, you know, the Big Three have adapted in a lot of ways ... They haven't managed things well, they have too much capacity, but I mean, talk about being too big to fail in a way, right?

The fact is Americans don't understand what collateralized debt obligations are, yet they sort of said, ‘Okay, let's bailout all of these banks and AIG' and yet people feel like, ‘Hmm what about the big car manufacturers?

Sounding Too Much Like Michael Moore, Chuck Todd Cites NewsBusters

On Thursday's "Morning Joe," after being told that a critique of his on the auto industry bailout sounded very similar to one made by liberal filmmaker Michael Moore, MSNBC political director Chuck Todd told co-host Willie Geist that he dreaded what the people at NewsBusters would say: "By the way, I can't wait 'til our friends at NewsBusters, you know, compare, compare me to Michael Moore. I appreciate that. I appreciate that, Willie."

The exchange occurred after Todd argued that there was a class warfare reason behind the fact that the October financial bailout seemed to have less resistance than the auto industry rescue plan now being considered. He argued, "We are holding the automakers and the UAW to a tougher standard than, it seems to me, that we held the Citibank guys and, it seems to me, that we held everything that's going on with the white collar bailout on Wall Street." [Audio available here]

He later added, "...And maybe it's because we also don't know anybody that works at GM...We don't know those families. But, we do know somebody at JPMorgan Chase." Geist then played a clip of Moore "making almost the same point you're making right now."

Just give us the money and nobody gets hurt.

That was the warning from the mayor of Lansing, Mich., on CBS's "The Early Show" Dec. 2. "You know this is a sure prescription to go from recession to depression if you allow this auto industry, our manufacturing prowess, to fall by the wayside," Virg Bernero warned:

This industry is too important, not just to Lansing, Mich., but to the whole country. This is our manufacturing base. You know we were the arsenal of democracy. We've talked a lot about economic security, and that's number one, but what about national security? You know, we were the arsenal of democracy in World War II; it was the auto industry that helped turn us around. Can you imagine a country, I would ask, can you imagine America losing our manufacturing edge, not having that manufacturing prowess? That hurts our national security. 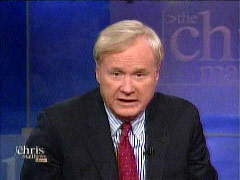 On Sunday’s Chris Matthews Show, host Matthews led the panel in a discussion over whether conservatives would choose to cooperate with the Obama administration in making "historic changes" to repair the economy, rather than stand in opposition to his programs. The premise of the discussion seemed to be that times are too serious for conservatives to dare dissent from Obama’s plans. At one point, David Ignatius of the Washington Post suggested that "thoughtful" Republicans will work with Obama as he referred to John McCain’s concession speech. Ignatius: "I thought that John McCain set the tone for thoughtful Republicans in his concession speech election night, where he reached out to Obama. He was remarkably generous. One of the best speeches he's ever made, in my book."

As he teased the show, Matthews seemed to wonder if Republicans would try to stand in the way of Obama accomplishing "great things," or if they would see the light and cooperate. Matthews: "Will the mountain of crises our country faces make Barack Obama do great things? And with all the crises, will even Republicans see historic steps are required?"