WashPost Puts 'Black Mark' for Brian Williams On Page One; Other Newspapers Bury It 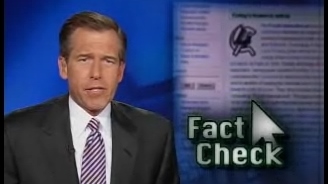 The Washington Post made a front-page story Thursday out of the revelation that NBC Nightly News anchor Brian Williams lied about being on a helicopter hit by a rocket-propelled grenade in Iraq.

Media reporter Paul Farhi began: "NBC News anchor Brian Williams conceded on Wednesday that a story he had told about being under fire while covering the invasion of Iraq in 2003 was false."

“After a groundfire incident in the desert during the Iraq war invasion, I made a mistake in recalling the events of 12 years ago,” he said...

The admission is a rare black mark for Williams, a poised, veteran newsman who has anchored NBC’s signature newscast since 2004 and has endeared himself to non-news audiences through appearances on “30 Rock,” “The Tonight Show” and other entertainment programs.

At least in the short term, the false story may damage the anchor’s most valuable asset — his credibility. NBC has not said whether he will face discipline for perpetuating the false story.

Williams’s claim of surviving an air attack bothered several soldiers familiar with air operations at the time, including Sgt. 1st Class Joseph Miller, who was the flight engineer on the helicopter that carried the NBC News crew. “No, we never came under direct enemy fire to the aircraft,” he told the newspaper. The soldier’s complaints prompted Williams to issue his first apology Wednesday afternoon on the “NBC Nightly News” Facebook page....

Lance Reynolds, the flight engineer on the Chinook that was hit, told Stars and Stripes: “It was something personal for us that was kind of life-changing for me. I know how lucky I was to survive it. It felt like a personal experience that someone else wanted to participate in and didn’t deserve to participate in.”

Farhi also noted another place where NBC has spread this tall tale:

A somewhat ambiguous recounting appears in “Operation Iraqi Freedom: The Inside Story,” a book written by NBC Enterprises in 2003. That account has Williams in the helicopter and details such as the grenade round grazing a crewman’s face.

It’s unclear in the book which Chinook Williams was riding in, but he comments: “There was some symbolism in all of this. A Vietnam-era RPG going clean through the tail of a Vietnam-era Chinook helicopter.” And a caption describes a photo taken inside a helicopter, saying “With NBC anchor Brian Williams...aboard, Army Chinook helicopters are forced to make a desert landing after being attacked by Iraqi Fedayeen.”

The New York Times buried the story the bottom of B-10, in a 377-word article by Ravi Somaiya headlined “NBC Anchor Apologizes for Saying He Was Shot Down Over Iraq.” Somaiya began generously: "The NBC News anchor Brian Williams apologized Wednesday for mistakenly claiming he had been on a helicopter that was shot down by ground fire in Iraq in 2003."

The story did include a snippet from Reynolds:

“Sorry dude, I don’t remember you being on my aircraft,” wrote Lance Reynolds on Facebook. “I do remember you walking up about an hour after we had landed to ask me what had happened.”

USA Today buried it in a three-paragraph news brief on the bottom of A-3: “NBC’s Williams sorry for false Iraq story in 2003.” The front of the paper’s Life section was dominated by NBC’s “Today” crew picking Grammy winners.